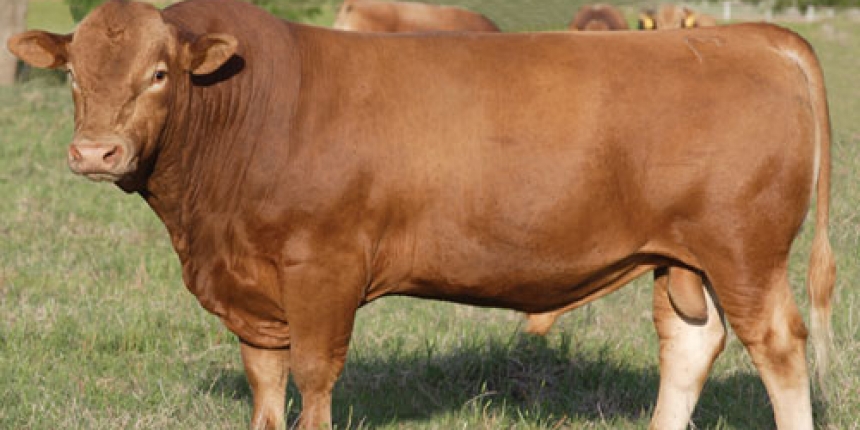 Akaushi beef inspires praise for trumping other breeds in marbling capacity and health benefits, while the breed itself displays competitive traits such as feed efficiency and calving ease.

Bubba Bain, executive director of the American Akaushi Association; Jordan Beeman, president of HeartBrand Beef; and Bill Fielding, CEO of HeartBrand Beef, collectively divulge the story of their prized product that they expect will “change the industry.”

Over the past century, Akaushi cattle were fondly considered Japan’s “national treasure.” Their genetics were strictly guarded and unshared with the international cattle market.

In what was “a monumental effort during a short window in trading regulations,” explains Bill Fielding, eight U.S.-bound Akaushi cows and three bulls were shipped out in 1994.

HeartBrand Beef, the company responsible for acquiring the cattle, began the conscientious task of increasing the herd to 4,000 fullbloods through embryo transfer.

According to Fielding, “The whole emphasis was to build up numbers and build up the integrity of the genetics. We were going along the same path the Japanese had for the last 100 years.”

Four years ago, the Beeman family acquired ownership of HeartBrand Beef, which redirected the emphasis toward selling bulls as well as marketing Akaushi and F1 Akaushi-cross beef.

“By producing half-blood carcasses, we feel that is going to make the biggest impact by bringing in our males, our genetics, on top of existing cattle breeds,” said Fielding.

“In terms of health, we have a leg up on the industry,” observes Bubba Bain. Akaushi produce an abundance of oleic acid in their tissue as a survival mechanism, which the Japanese studied.

The ratio of MUFA to saturated fatty acids is 1.4 in Akaushi beef, which can generate a similar good- (HDL) to-bad (LDL) cholesterol ratio in the human body, as shown by several of Dr. Steve Smith’s studies at Texas A&M University.

Oleic acid is associated with both the smooth umami flavor sensation and melting tenderness found in cooked Akaushi beef.

The sublime flavoring of Akaushi beef has heaped an overwhelming demand on the breed, whose production cannot keep pace with its epicurean acclaim.

The American Akaushi Association is looking for cattlemen in all areas of the U.S. to enhance their livestock with Akaushi genetics.

Bain attests that bulls can improve any breed by doubling the quality grade and reducing or minimizing yield grade 4s and 5s and can eliminate all 4s under the proper protocol.

For example, Akaushi crossed with a low-end group of cattle that historically becomes 40 percent USDA Choice produces an F1 product at 85 percent or greater Choice or above.

“For any packer, that’s the prettiest carcass you’ll ever want to look at,” Fielding beams. Akaushi fullbloods over 1,500 pounds of live weight are 98 percent USDA Prime, having 64 percent dressing percentages, Bain said.

Akaushi crosses with leaner breeds only improve dressing percentages, while ribeye areas tend to stay consistently between 12 1/2 to 13 1/2 inches, with positive cutability feedback.

However, Bain remarks that “there’s a stigma out there that Japanese cattle take too long to feed and they are not economical. Not with Akaushi. They fit consistently in any of the programs at any of the feedlots. It’s the same days on feed and the same feed that’s going to the other cattle.”

Without growth promotants or implants, they gain 3 to 4 pounds a day with a feed conversion of about 5 to 6. Bain makes it clear that “we do not want to send the message that we’re just geared toward the upper end.

These genetics are great to go after a Choice product and do it using less corn or less feed.” Grasping the significance of Akaushi contribution, Fielding pointed out that “all the problematic breeds are now given an opportunity to participate on the high-quality score side.”

“High epicurean demand for the marbling of Akaushi has led to its growing popularity.”

When practical, Fielding recommends Akaushi be kept on pasture until they reach 850 pounds for the highest resulting quality grade and lowest backfat deposit.

However, Fielding adds that “even in drought conditions we’ve seen F1 calves perform a lot better than calves of other breeds.” Akaushi tend to have Bos taurus carcass performance with Bos indicus adaptability and efficiencies.

“They can acclimate within 30 to 40 days wherever you take them,” from the mountains of Montana to the south Texas plains.

“We’re emphasizing to producers that you have to get a calf on the ground. You have to have an efficient breed if economics are involved,” noted Fielding.

The American Akaushi Association has surveyed the economics on the Akaushi breed through several participants, including the Matador Cattle Company.

From calving ease to feedlot performance, raising Akaushi was found to be no more costly than any other breed.

“It’s no longer an experiment. It’s the real deal in terms of the efficiencies being there. It makes sense for a normal cow-calf guy to be using Akaushi bulls,” suggests Fielding.

“All our bulls are sold out every year,” Fielding shared. Eight registered operations across the U.S. hold annual bull sales.

Many cattlemen contract for $100 premiums on the bulls’ offspring, on the condition that they be terminal. Fielding states, “We think the business model is good for the producer and anyone in the program because it maintains the integrity of the program.”

Producers either opt for HeartBrand Beef to buy back their calves, or they may sell on a grid. “We try to give better incentives to the producers,” and because of the superior feedlot performance, Fielding explains, “we want to pass that on.”

Jordan Beeman thrives off of positive feedback from cattlemen such as, “It was perfect first-time calving.”

“When people try it,” he said, “they don’t need to know the nutrition; they just know it’s the best beef they’ve ever had.”

With only 2,000 crossbred Akaushi cattle harvested during this year, Akaushi beef speeds toward increasing its market share.

Thanks to aggressive herd increases, between 9,000 and 10,000 cattle will be harvested in the next year, with 20,000 head following in 2013. HeartBrand makes Akaushi beef available to consumers via e-commerce, and Jordan Beeman contracts with retailers.

“It’s not just a niche market; it’s not just a Prime product. I don’t know of any good reason why every herd in the country wouldn’t want to introduce these genetics.”

Bill Fielding believes, “We have a premium program that’s better than any other on the market; we’ve got the best product on the market. We have the facts to back us up. Our challenge is to hold these values and to make all this available in a way that makes economic sense.”

This article originally appeared in the January 2012 edition of Progressive Cattleman.  It has been reprinted with their permission and approval.

Beef Cows, How Big is Too Big?

The genetic revolution in the beef cattle...