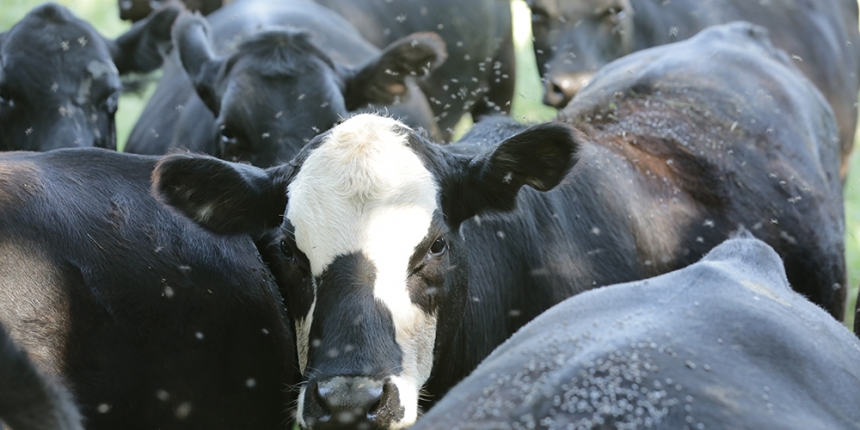 Horn flies are a major concern to beef producers, costing the industry more than $1 billion annually. Left untreated, their painful bites can present a number of risks to cattle and interfere with their ability to maximize weight gain potential. However, a recent study confirmed that stocker cattle treated with Altosid® IGR, a feed-through horn fly control solution, experienced a 15.8% increase in average
daily gains compared to cattle who went untreated.
Conducted in northeast Oklahoma in the summer of 2011, the study demonstrated that horn fly populations can be maintained below the economic threshold of 100 flies per side when cattle consistently consume the targeted level of mineral tubs treated with Altosid® IGR. The product was designed specifically to disrupt the horn fly life cycle, preventing larvae from maturing and emerging from the manure of treated cattle. This mode of control led to reductions in horn fly populations for cattle in the study treated with Altosid® IGR, promoting the increase in average daily gains. 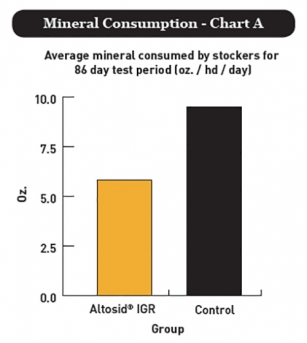 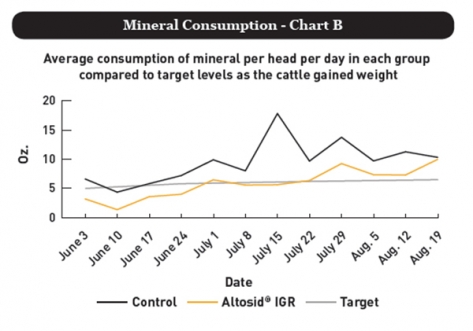 This study was conducted to determine the efficacy of Altosid® IGR in mineral tubs for the control of horn flies (Haematobia irritans) on stocker cattle, and if the resulting control would impact cattle weight gain.

On the first day of the study (Day 0), individual weights were taken on 50, 6-weight animals and they were randomly assigned to one of two treatment groups - 30 animals received Altosid® IGR in their feed while 20 were selected to serve as the control group. (The difference in group numbers was based solely on pasture size.) Once cattle had been divided into treatment groups, the appropriate mineral tubs were offered, free choice, to the cattle in each corresponding group. The mineral tubs were weighed weekly to determine consumption level, with that number divided by the number of days of access and the number of head in the pasture to establish an average daily mineral consumption per head.
Horn fly populations were monitored weekly by taking digital photographs of 15 randomly selected animals in each group, placing a grid overlay over the magnified images and counting the number of adult flies on one side of the animal. Animals were individually weighed on Day 33, Day 68 and at the end of the study on Day 86. All data analysis was conducted using the PROC GLM procedure and means were separated with an LSD test set at the 0.05 alpha level (SAS 9.4).

Data collected from the study was analyzed to determine what impact the administration of Altosid® IGR had on mineral consumption, horn fly control and cattle weight gain.

Mineral Consumption
Average mineral consumption in the control group (9.6 oz. / head / day) was higher on a per-head, per-day basis than the Altosid® IGR treated group (5.8 oz. / head / day). One significant observation was that 6-weight animals in the Altosid® IGR group did not begin consuming the target mineral amount of 4.8 oz. per head per day (0.8 oz. / cwt / day) until the 29th day of the study. Please refer
to Charts A and B on the next page for the data.

Horn Fly Control
Through the first five weeks of the study, horn fly populations were not significantly different between the Altosid® IGR treated group and the control group. Beginning on Week 6 and continuing through Week 10, there was a dramatic reduction in the number of horn flies on the cattle in the Altosid® IGR treated group. This was significantly different than control group numbers for these five weeks. Please refer to Chart C on the next page for the data.

Weight Gain
Initial animal weights were not significantly different between treatment groups, with animals in the Altosid® IGR treatment group averaging 644.5 lbs. compared to 617.5 lbs. in the control group. Please refer to Chart D on the next page to see how the weight gains compared throughout the study.
Although not statistically different (P=0.0597), this final difference in weight gain calculates out to be an average of 0.33 lb. advantage in average daily gain among the Altosid® IGR treated group. This equates to an average of 27.97 lbs. or 15.8% higher weight gain for the cattle given Altosid® IGR
in their mineral tub, as compared to the control group over the course of the trial. Please refer to Chart E on the next page for the data. 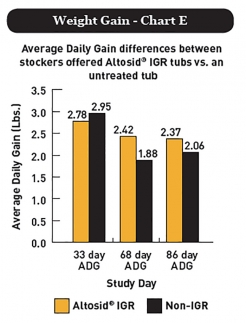 For a detailed overview of the data collected throughout the study, please refer to the illustrated data charts

Results of the study help to validate many presumptions about horn flies and their effects on cattle. First, by using Altosid® IGR and getting appropriate consumption rates, producers should see a significant drop in horn fly populations. Second, by controlling horn flies with Altosid® IGR, animals could experience daily weight gains of as much as 15.8% (0.33 lbs.) greater than animals where no fly control solution is being deployed. Finally, the estimated weight gains from using Altosid® IGR can help producers achieve a s much as a 6.5:1 return on their investment in the product.

Altosid® IGR i s a feed-through horn fly control solution t hat moves t hrough t he d igestive system and works in cattle manure where horn flies lay their eggs, to limit future horn fly populations. Unlike other feed-through products, Altosid® IGR is an insect growth regulator (IGR), and it is classified by the EPA as a biopesticide. The active ingredient in Altosid® IGR mimics naturally occurring insect biochemicals that are responsible for horn fly development, preventing larvae from developing into breeding, biting adult flies.

How a horn-fly control program built around...