BEKAERT: Cultivating the Next Generation of Farmers 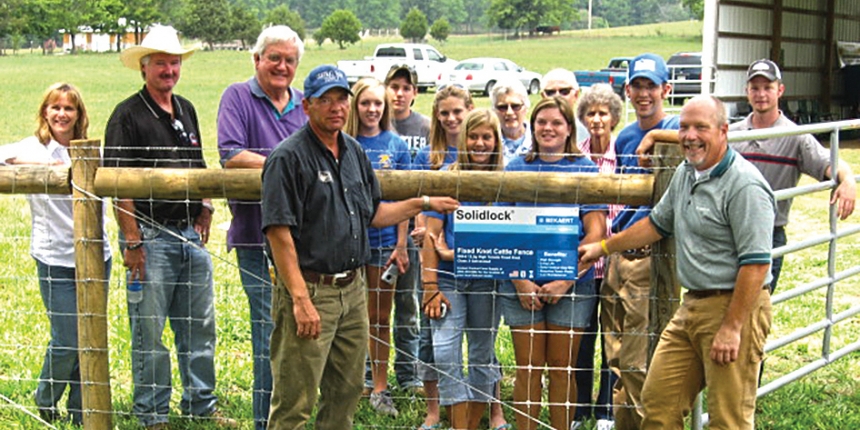 Young women and men across the globe are increasing their knowledge and understanding about the agricultural industry. These future generations of farmers and ranchers are gaining first-hand understanding of agricultural techniques — all thanks to 4-H and supportive companies like Bekaert Corporation who recognize the vital role that youth play in the future of farming in America and throughout the world.

Like Bekaert’s global presence, 4-H is far reaching. As the largest youth development organization, 4-H consists of nearly six million young people across the nation learning leadership, citizenship, and life skills. In the United States, 110 universities and Cooperative Extensions implement 4-H programs through more than 3,000 local offices serving every county and parish in the country. Outside the United States, 4-H programs operate through independent, country-led organizations in more than 50 countries.

As a partner with the National 4-H Council, Bekaert Corporation, a world market and technology leader in steel wire transformation and coatings, is eager to help the nation’s largest youth development organization create positive change and a better future for young people. From June 2014 to May 2015, Bekaert donated 1 percent of its retail sales from all Premium Gaucho® high-strength barbed-wire fencing to 4-H.

With a continued partnership into 2016, the 4-H programs that Bekaert helps support benefits young people who are eager to learn real-world skills that will prepare them for the future.

Mike Adams, South-East Regional Sales Manager for Bekaert, believes strongly in the role 4-H plays in young people’s lives. Having participated as a child in the FFA program for more than four years, Adams was eager to have his children participate in 4-H as they grew.

“I think it is great to get kids involved in something like 4-H because it helps in teaching them about many topics and allows them to participate in different events,” Adams says. “It’s good to be a part of something that helps mold them to become leaders and get them involved in the agricultural industry.”

Adams says it’s also important for companies, such as Bekaert, to recognize that kids are the future of the agricultural industry and these corporations need to invest in them accordingly. “Being involve in 4-H allows youth to learn, firsthand, what’s going on with the industry,” Adams says. “The sooner they become involved and begin understanding the industry, the better.”

Michael Waigand, Mid-Western Regional Sales Manager for Bekaert, agrees. “At Bekaert we realize that the future of the agricultural industry is in our youth and 4-H is one of the few organizations that focus on our youth in agriculture today,” Waigand says. “I personally have been pushing for more involvement from Bekaert and I’m proud to be a part of it going forward.”

In fact, Bekaert’s role in supporting 4-H is an extension of the company’s historically strong initiative in agricultural education for adults and youth alike.

“In the past, we as a company, have played a big part in education to the agricultural industry about fencing and wire products we produced,” Waigand says. “Most of the focus had always been to adults, which is still needed and we will continue to do. But now we are looking further down the road and wanting to include those kids who will also soon be adults and who will be buying and using fence and wire products.”

Focusing on agricultural education, including farming and ranching practices, is paramount for the successful future of the industry, Waigand recognizes the importance of educating kids on a myriad of topics to help them in their future.

“4-H is open to everyone and offers all sorts of facets — from sewing, gardening, robotics, and public speaking,” Waigand says. “This is great as it gives kids who may not come from rural America and introduces them to the agricultural industry in general. Some kids growing up in the city may never get the chance to learn about agriculture otherwise.

“I personally grew up on a family farm in Iowa and have been involved in agriculture all of my life. I have been able to take what I learned through my experiences in 4-H and now share them with my kids and see them benefit as well,” Waigand says. “4-H helps bring families together as our whole family is involved today. Our kids show sheep and pigs as part of their 4-H projects. We get to spend countless hours working together as a family throughout the summer, getting ready for shows, county fairs and the state fair competitions.”

Bekaert’s role in furthering 4-H’s efforts means that Adams, Waigand, and many other company employees can share the positive impact 4-H has had on their lives with other children. Not only do 4-H participants learn about livestock production and management, but also they get involved in various community projects — from serving food at soup kitchens, planting flowers at retirement homes and going Christmas caroling at nursing care centers.

“4-H has had such a positive impact on my childhood and knowing that now I get to give back through my employment with Bekaert is fulfilling,” Waigand says. “I am looking forward to participating and getting more involved in our initiatives at Bekaert.”

In 2016, Bekaert will continue its ongoing support of 4-H and help the organization in its initiative of “Grow True Leaders” — helping 4-H support the next generation of farmers. Specifically, Grow True Leaders is 4-H’s national campaign to grow 4-H’s annual service from 6 million youth per year to 10 million, by 2025.

“4-H was founded more than a century ago based on a core belief in the power of young people and their influence to improve the world. Thanks to the support of partners like Bekaert, National 4-H Council is able to continue providing the kind of hands-on 4-H experiences that grows millions more empowered young leaders today,” says Jennifer Sirangelo, president and CEO, National 4-H Council.

“One of the beauties of 4-H is that it is limitless,” Waigand says. “I know that there are so many opportunities for getting involved — both as a child and also for adults. You are only limited by how much you want to be involved and I expect Bekaert to continue to step forward. I am excited for the future of our youth and look forward to being a part of that with my kids, our club, our community, my employer, and our world.”

BEKAERT & SPARR: Fencing with a Purpose

By Susan Sands It’s a team effort to...