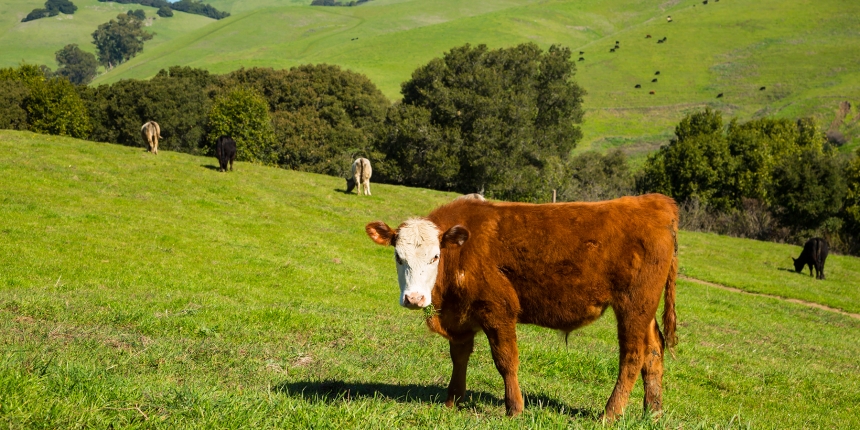 By Diane Nelson - College of Agricultural and Environmental Sciences

Most of the 5 million cattle that graze on California’s rangelands like to dine in the valleys and hang out by creeks. This can lead to overgrazing in riparian areas and let perfectly good forage on hillsides go to waste.

But some cows are different. They prefer to climb hills and mountains and eat along the way. If more cattle followed the road less traveled, rangelands would be more productive and sustainable throughout California and the West.
That is why a team of researchers, including University of California, Davis, animal geneticist Juan Medrano, is working to develop an easy, inexpensive genetic test to help ranchers improve cattle distribution by breeding hill-climbing cows.
“It’s very exciting research,” said Medrano, a professor with the Department of Animal Science who is collaborating with scientists throughout the West. “DNA technology makes it relatively easy to test and breed for production traits like milk yield and growth rate. But it’s brand new to identify genetic markers linked to animal behavior. This could have a huge impact on food security and rangeland management.”

Nature and nurture
One third of California — 38 million acres — is rangeland. Most of it is mountainous or hilly and managed for livestock production. Grazing on rangeland feeds livestock, but also offers many environmental benefits such as keeping weeds and other invasive species in check, providing water storage and carbon sequestration, and supporting habitat for animals and plants found nowhere else in the world.
Problems arise, though, when rangeland is overgrazed and cattle spend too much time near running water, where manure and calving can create water-quality risks for people downstream. That is especially true in California. Some 80 percent of the state’s drinking and irrigation water is stored on or passes through rangeland.
Researchers at UC Davis and beyond have been working for decades with ranchers to keep cattle from overgrazing and congregating by creeks. They build strategic fencing, for example, and provide water and salt licks on ridgetops away from running water. Cowhands often herd cattle from low-lying pastures, but that is labor-intensive and only a temporary fix.
A few years ago, Derek Bailey, a professor of range science at New Mexico State University and a colleague of Medrano, had an intriguing thought: What if we combine nature and nurture?
“I’ve been watching cattle for years, and there are always some cows that just take off for the hills, like they didn’t know they weren’t elk,” Bailey said. “They could be belly-deep in green grass, and just bolt for the hills. They like it up there. We can breed for other traits. Why not select for hill climbing?”
Bailey joined forces with Medrano and a team of researchers including animal genetics expert Milton Thomas at Colorado State University. Funded by a grant from Western Sustainable Agriculture Research and Education, the group is close to developing a genetic test for whether a bull is likely to sire daughters who like to climb hills.

Locomotion, motivation and spatial learning
To identify hill-climbing cattle, Bailey and his crew put GPS collars on 180 cows on seven ranches in three western states and took measurements every 10 minutes for months at a time. They tracked the cattle’s slope use, elevation gain and distance traveled from water. They also took blood samples that Medrano and his team analyzed for chromosomal commonalities. Medrano found overlap in genes linked to locomotion, motivation and spatial learning.
“Results so far are very encouraging,” Medrano said. “Soon we will be able to test and breed for hill-climbing behavior.”
With both plants and animals, breeding for one trait can sometimes produce unintended consequences like predisposition to disease or low calf weight. Researchers are looking closely at that possibility, and have so far found no correlation between hill-climbing behavior and undesired traits.
“We’ve looked at calf-weaning weights, pregnancy rates, blood pressure, even disposition,” Bailey said. “We had one theory that hill-climbing cows tended toward the meaner end of the scale, but that’s not the case.
“Some cows just prefer to climb more than other cows,” Bailey said. “And if breeding can move the bell curve in that direction, management tools like fencing and herding will be much more effective.”

California ranchers are intrigued by the possibility.
“I can see many ecological and economic benefits to breeding for cows who like to travel,” said Clayton Koopmann, a rancher and rangeland-management consultant who runs cattle on hilly ground throughout the San Francisco Bay Area. “Forage would be consumed more evenly, and that’s good for livestock production and for the environment.”

Considerations for Delayed Calving to Fall for Open Cows

Considerations for Delayed Calving to Fall...