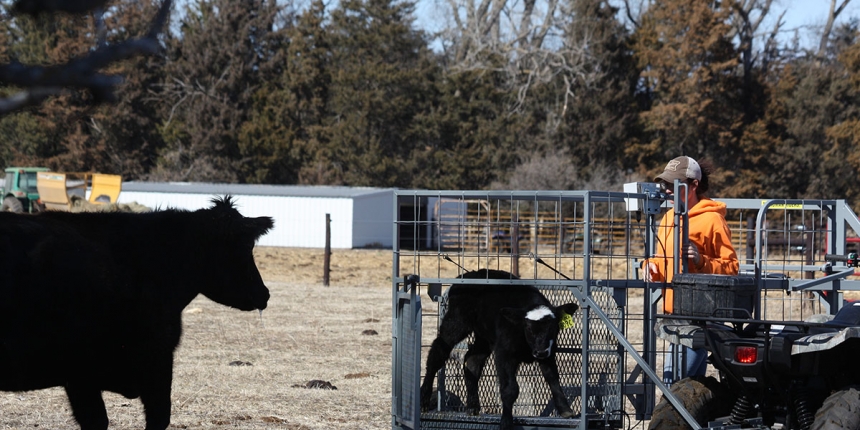 If you own an ATV or UTV and have cattle, Dan Leo has an attachment to make working with young calves safer and easier.
“Safety is the number one goal of our durably built and user-friendly catchers,” says Leo, president of Safety Zone Calf Catchers. “The traditional way to tag and process calves can be dangerous and often takes more than one person to do the job. With our calf catcher it’s easier on the producer, the cow and the calf. One person, who can operate an ATV or UTV, can safely work calves.”
The calf catcher is a durably constructed steel cage that mounts with ball hitches on the front and back. It works well in all types of terrains and conditions. With the front gate locked open, the driver approaches the calf and captures it in the cage by shutting the spring-loaded gate. The producer enters the pen through the open side by stepping from the ATV or UTV and moves the calf to the rear holding area where he can tag, vaccinate, weigh and even band the babies while protected from the mother cow. When finished the producer releases the calf out the back to its mother.
“Traditionally, producers have to get to the calves early after birth otherwise it can be difficult to catch and even hang on to them, and then it can require two or more people depending on the protective behavior of the mother cow while the processing takes place,” Leo notes. “With our calf catcher unit, one person can catch calves, even if they are a week or older when they have plenty of run in them. Another benefit is the calf holder located at the back of the catcher. It not only secures the calf for processing, but works very well for pairing out, as the cow can see and smell her baby and will then easily follow to another pasture or calving barn in inclement weather. Cows will follow the calf virtually anywhere!”

The ATV catchers sell for $2,095 plus freight shipping. Catchers designed for UTVs are an additional $450. Other options available include a waterproof, digital scale - especially beneficial to seedstock producers and a tow hitch that aids long distance moving. The company sells directly to cattlemen but welcomes dealership inquiries.
“Built in both Nebraska and South Dakota plants, the calf catcher will last for generations. Sales have stretched across the U.S. with exports to Canada, Australia and France.” Leo adds.
To see it in action, check out the video on the company’s website.
Contact: Safety Zone Calf Catchers, LLC, 1146 7th Ave, Dannebrog, Neb. 68831 Phone: (877)505-0914;
www.safetyzonecalfcatchers.com