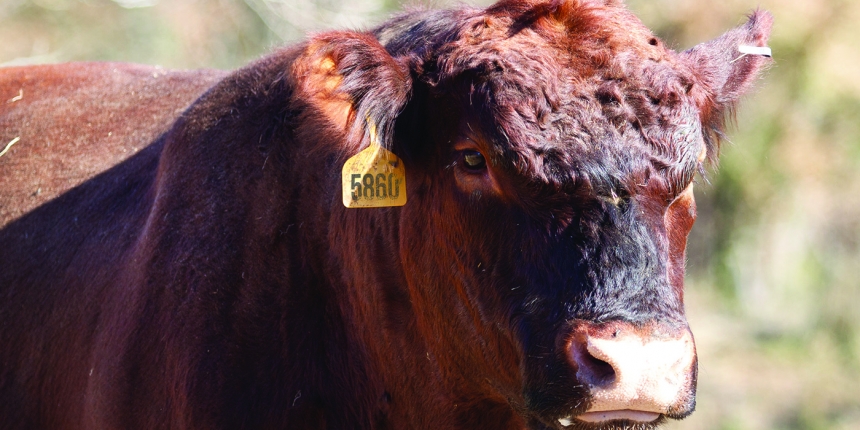 Hot iron brands have been the standard and legal way to identify ownership of cattle, but many other identification systems are often used for individual identification and herd records – such as freeze branding, ear tags, brisket tags, neck chains with numbers, lip and ear tattoos, horn brands, etc.

Before the advent of ear tags and brisket tags, ranchers came up with ways to differentiate their cattle from their neighbor’s animals.

Traditional ID
Traditional methods for ownership included earmarks and skin wattles.
An earmark – be that a split ear, undercut ear, ear notch or tip cut off – or a dangling piece of skin on the underside of the neck could be seen from a distance, even if ranchers were not close enough to see the brand on the animal.
Bill Clymer, a Texas rancher, uses a small notch at the tip of the left ear when a calf is born.  A person can always tell who the calf belongs to, even if it might be awhile before the calf gets branded.
“Then, if he loses his ear tag, he still has the ear notch,” Clymer says.
Ear notching is still used in east Texas and the Southeast.  Some earmarks in Florida date back to the Spaniards.
The Seminole Tribe uses earmarks for owner identification since different families run cattle together, sell them in truckload lots and check earmarks for ownership when they weigh the cattle.

Earmarks
Tommy Mann, who managed the Seminole cattle from 1972-90, says the tribe uses a combination of brands and earmarks to show ownership.
“The brand is the legal ID, but earmarks are often a lot easier to see. Ranchers often earmark calves when they are small and may not brand them unless they decide to keep them in their herd. If they sell the calf, they don’t brand it,” he says.
“The Seminole families have their own herds, but their replacement heifers all run together until they are two years old.  At one place, they have about 40 different cattle owners, and on the other reservation they have about 30 – so there are about 70 different earmarks and brands,” says Mann.
A triangular notch out of the end of the ear is called a swallowfork. If the end of the ear is cut off, it’s called a crop.
A little notch in the bottom of the ear is an underbit. At the top of the ear, it’s called an upperbit or an overbit. A fishhook underbit is more sloping and doesn’t go clear to the end of the ear, so it looks like a fishhook.
An underslope starts at the back of the ear and comes out toward the end of the ear.
“A ‘sharp’ comes clear to the end, making the end of the ear look like a point.
“One of the larger ranches here in the early 1900s had a sharp, sharp, one on each ear,” says Mann. “Most cattlemen use a combination of marks. They may have a left ear with a crop and a split, and the right ear has a crop and an underbit or underslope.”
“There are many different combinations.  Some people use a crop and two splits,” he says.
“Earmarks and brands go together when we register a brand, even though the brand itself is the only legal mark. Some of our brands here are very old, from when the Spanish brought cattle to Florida,” says Mann.

Metal tags
Before the advent of plastic or nylon ear tags, some ranchers used metal tags.
Monroe Magnuson, a Utah rancher, remembers gathering and collecting metal ear tags as a child at the range association sorting pens where the cattle came off Forest Service allotments in the fall.
He had some tags in his collection from the 1940s and 50s.
“The most easy-to-see mark in our part of the country was the wattle, though very few people use these today.  Our wattle was on the shoulder,” Magnuson says. “On my mother’s side of the family, the ranchers all had wattles on the brisket, dewlap or chin.”
He continues, “I remember helping my uncle work calves when I was a kid, and I hated to wattle the calves on the brisket because it was a bloody job. But it was easy to identify those cattle from a distance, from either side.”
“Here in Utah, I’ve seen wattles between the eyes, on the cheek, two side-by-side on the neck, on either side of the tail, and other places,” says Magnuson.

In-herd ID
Today many ranchers use in-herd identification with individual numbers or a combination of numbers and letters, utilizing ear tags or brisket tags. The latter usually stay in place for the life of the animal and are not as readily torn out as ear tags.
Earmarks are sometimes used, to help with record keeping. Ear notching or ear tag notching can be used to identify breeding groups, cull groups or antibiotic-treated cattle. For instance, if a person has to treat a calf, a quick notch out of the ear or the bottom of the ear tag is a later reminder that this particular calf had to be doctored.
Ranchers may also note health problems or indicate their plans to keep or cull animals using ear notches or marks on the eartag.
A handy identification system used by some ranchers is brisket tags on the cows, a permanent in-herd ID number and ear tags on the calves to match the mother’s number, so producers always know the dam of the calf.
Even though ear tags are often lost, they generally last through calfhood, and if they stay in longer, the dam’s number is there for reference.

Send comments on this article to roundup@wylr.net.