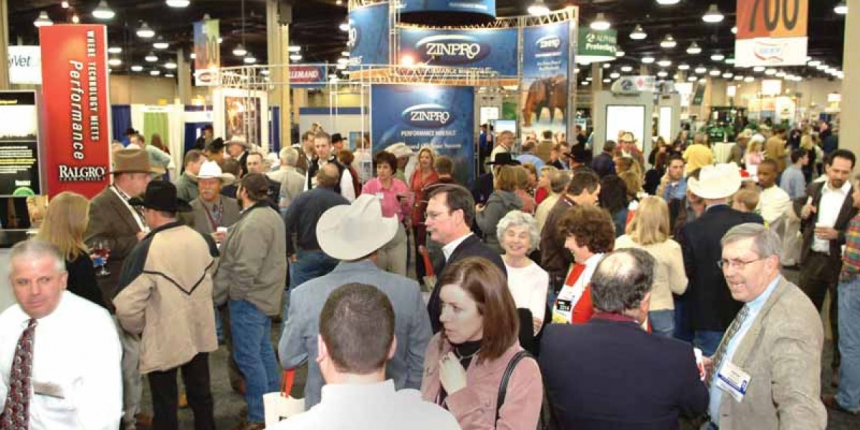 Volatile input prices and unpredictable markets have brought the issue of feed efficiency in the beef industry under more intense pressure than ever before. While accurately predicting feed efficiency remains difficult, cattlemen like Colorado rancher Lee Leachman and researchers like Pfizer's Ron Green believe they are inching much closer to answers about how producers can maximize the results of the feed they're putting into their animals. The two men will provide a presentation, "Measuring Feed Efficiency," for Cattlemen's College at the National Cattlemen's Beef Association at the 2009 Cattle Industry Convention and NCBA Tradeshow.

"We've been measuring individual feed consumption and conversion on our cattle and the results are quite surprising," Leachman says. "Conventional wisdom has always told us that high gaining cattle were the best feed converters, but our data is proving that this is not always the case."

By the Spring of '09, in test periods lasting between 80 and 120 days, Leachman will have measured actual feed intake on over 450 head of cattle and gathered data showing what the animals actually ate in comparison to what they were predicted to eat. The cattle's body weight, gain, and composition were used to predict how much feed they needed to support their growth. Leachman says he's finding that appetite and feed conversion vary greatly from animal to animal.
"At this point in the cattle industry, we believe that feed efficiency offers more economic gain than selection for any other trait," Leachman says. "We've been feeding a high roughage diet that's typical for breeding stock and is designed to result in about three pounds of gain per day. At this rate of gain, we see variation in consumption from 15 pounds of dry matter a day up to 30 pounds of dry matter per day. Researchers suggest that efficiency differences are mostly at the cellular level. Thus, it makes sense that we cannot see the differences phenotypically – we have to measure actual consumption."
Leachman says the EPD's cattlemen use to select some traits are helpful, but won't effectively identify cattle that efficiently convert feed.
"Cattlemen should use EPD's because there are economic advantages to that process," Leachman says. "But our traditional growth EPD's are not reliable indicators of feed efficiency. At this point, there are two strategies cattlemen can utilize to select for feed efficiency. One is to utilize genetic markers and the other is to buy bulls or semen from producers who are measuring actual feed intake."
Leachman's data is showing that the correlation between gain and consumption is about 60 percent. The additional 40 percent is made up of a variety of other factors. He believes "stacking," breeding bulls proven to possess high feed efficiency to heifers with the same trait, will lead to even more efficient cattle in the future.
"The progeny out of our best sires right now will convert with half a pound less feed per pound of gain," he says. "It seems very likely to us that within one generation we will increase the improvement to about one pound of feed less for every pound of gain. At today's prices on a yearling fed animal, that pound is worth about $50 per head. Over the next 20 years, I think we'll see an enormous change in feed efficiency in beef cattle."
Leachman explains that he expects that the industry will eventually reduce the average effective feed conversion rate from the current average of 6.5:1 down to 5:1 or eve 4.5:1.
"Over the next 20 years, with this type of genetic selection, we can potentially reduce amount of feed needed to grow a pound of gain by 20 percent," he says. "The DNA tools that companies like Pfizer are starting to provide will allow producers to put that efficiency to work for them."
Green, Global Director of Technical Services, Pfizer Animal Genetics, says his company is seeing rapid growth in development of technology used to identify genetic markers that predict feed efficiency. He expects that new products in 2009 will significantly enhance the applicability of DNA testing for genetic improvement of feed efficiency.

"We've been focusing our efforts on net feed intake (NFI), a trait that measures how much an animal actually consumes as compared to what it is predicted to require for a given level of gain " Green says. "We've searched for genetic markers, or regions of the bovine genome that describe the variation we see for that trait, as well as for daily feed intake and gain. What we are targeting is a DNA marker panel that predicts an economically meaningful percentage of the genetic variation in this trait, expressed as a molecular value prediction. While the initial tests that have been made available in the market have scratched the surface in this area, the new panels are expected to move the technology to this level in a form like an EPD.
Green points out that, while current DNA tests are evolving rapidly, they do offer an improved means of gathering feed efficiency data for genetic improvement and precision management.
"Collecting meaningful NFI phenotypic data for genetic evaluation requires substantial investments of capital and time ," he says. "Not many seed stock breeders are in a position to invest in technology that will measure individual feed intake for each one of their bulls and then evaluate those data to identify feed efficiency traits, not to mention extending that to the cow herd. The biggest opportunities for the cattle industry in genomics technology are for these kinds of economically critical, but very difficult to measure traits - feed efficiency, fertility, and disease susceptibility."
Green, who is working with Leachman and other seedstock producers in this area, believes NFI will become more and more critical as demand for commodities and energy sources continues to build around the globe and increased focus is placed on environmental sustainability.
"As we look to the future, there's an obvious need to address this issue," he says. "We need to find the most creative ways we can to do that. I believe we're at a stage now where producers should step back and look hard at the technology that's becoming available to them. Producers should be looking at everything that's available and what's coming on the horizon to see if they can enhance feed efficiency and other economically relevant traits that work on the input/cost side of the profit equation. Within the next two years I expect we'll see major advances on all fronts in addressing these needs."