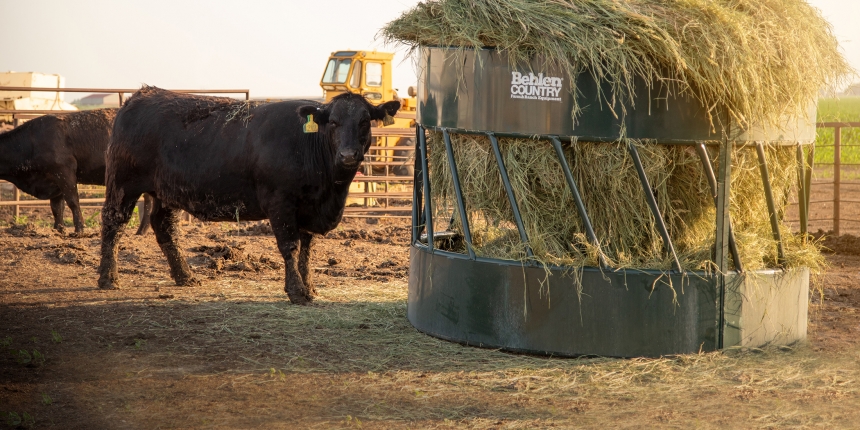 Input prices are going up.  Equipment prices are high, and, in some cases, equipment is hard to get.  Fuel prices are rising.  Drought conditions are wreaking havoc on the ag industry.  Now more than ever, it’s imperative to be efficient in our feeding practices.  When a mature cow can eat upwards of three tons of hay in a six-month winter-feeding season, making feed efficiency a priority is natural.

While feeding hay daily is one of the most effective ways to prevent waste, it is way more labor-intensive than providing whole bales at a time.  Therefore, many producers choose to use bale feeders or rings when feeding large, round or square bales.  However, not all bale feeders are created equally when it comes to their ability to prevent hay waste.  Let’s explore several types of bale feeders and some of the pros and cons of each.

Standard Bale Rings
While the concept of a standard round bale ring is a simple one, these types of feeders come with many options.  One of the most notable options is whether to use a feeder with solid panel sheeting or fender around the bottom or not.  Many studies have proven that these fenders keep hay within the feeder, reducing waste, sometimes up to seven percent.  And while a sheeted bale feeder will reduce waste, they do tend to run higher in price due to material and handling costs when compared to un-sheeted units.  Many producers tend to opt for the often-lower price point option of the open bottom bale feeders.  Open bottom bale feeders come in varied types of materials such as steel and polyethylene. The number of feeding spaces is another option that should be considered, not only on standard, open-bottom bale rings but on all types of feeders.  If there are more cows than feeding spaces, there is more competition for those spaces.  This tends to create more hay waste as cows push and headbutt each other to gain access.

Cone or Chain Feeders
Cone-type bale feeders have become very popular since they first made their appearance due to their hay saving abilities.  They use solid welded bars or chains to keep the bale centered, away from the edge of the feeder.  This allows any hay scraps pulled free by the cattle to fall within the feeder rather than outside of it where it is then wasted.  Because the main objective of these types of feeders is to save hay, you will find that most have a solid sheeted skirt around the bottom to keep those fallen scraps of hay within the feeder.  Producers can even purchase inserts to convert standard bale feeders into these cone types.  “I’ve been using cone inserts or cone-type feeders for nearly ten years now and can say they waste way less hay than your regular bale feeder,” says Brandon Luebbe, a cattle producer from Staplehurst, Nebraska.  “When I look for a bale feeder, I like ones that are built to last, with a bottom, bolt-on skirt, and I look for a feeder that will help me to save hay in the end.”

While it seems like a “no-brainer” to use these types of feeders due to their ability to reduce hay waste, there are a few things to consider before purchasing.  The first is that it can be difficult to load a bale into these feeders and oftentimes requires equipment like a front-end loader or skid steer to drop the bale down into the feeder from above.  These feeders are usually very heavy-duty, but as such, they are usually the heaviest in weight as well.  This makes moving them difficult without the proper equipment.  Finally, because these feeders are some of the heavier feeders on the market, they, often, come with a higher price tag than standard bale rings.  A producer will have to put pencil to paper to calculate if the amount of hay savings (sometimes up to 15% less hay waste compared to standard bale rings) justifies the cost of these types of feeders for their operations.  Don Preston with Behlen Country, a livestock equipment manufacturer, has this to say about buying bale feeders, “I’ve sold a lot of feeders over the years, and nearly everyone I have sold a cone type feeder to have said they will never go back to a standard bale ring.  I’ve found that producers on average get three to four more days out of a bale with these types of feeders.” When asked about what advice he would give producers looking to purchase a new bale feeder he says, “Look at the gauge of the product.  Know how that plays into how long that feeder is going to last.  If you are only expecting a feeder to last a season or two then those lighter gauge feeders might work for you.  But if you are wanting a feeder to last for years, definitely opt to get the heavier gauge feeder.”

Hay Nets
Hay nets, specifically slow feed hay nets, have gained much popularity in the equine industry in recent years.  Because cattle are ruminants, they don’t necessarily need a “slow feed” hay net, but the hay savings aspect of these nets is intriguing.  One hay net maker boasts cutting waste up to 75%.  Now there are things to consider when choosing a hay net size, such as the type of hay you are feeding, but most makers agree that a two to three inch hole or netting size is ideal for cattle.  One of the advertised benefits of hay nets is their ability to slow the consumption of hay.  This simulates grazing while reducing boredom and stress.  This may also reduce the number of bales needed for the hay feeding season.

While not necessary, many producers use these nets in conjunction with a bale ring for further hay savings.  In this aspect, hay nets could be considered a hay feeding accessory, even though they can be used by themselves.  Using them with a bale ring prevents cattle from standing on top of the hay as the cattle eat the bale down.  Cattle standing on hay will also defecate on it, creating waste.  One thing to note when using hay nets is to use caution with cattle that have ear tags or horned cattle.