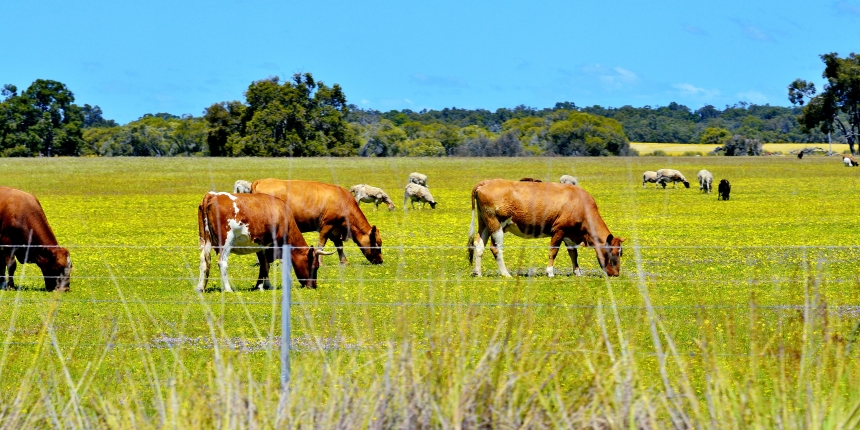 Have you ever considered diversifying production on the farm?
Producing beef cattle and meat goats on the same farm may improve your financials, says University of Missouri Extension agricultural business specialist Jennifer Lutes.

Lutes developed a model that looks at the economics of co-grazing – a diversification strategy involving production of more than one livestock species on the same farm.

According to her model, a co-grazing scenario generated higher profit per labor hour and per acre along with higher net income than scenarios that involved producing only cattle or goats.

Lutes presented on the topic Feb. 22 at the Southwest Missouri Spring Forage Conference in Springfield.

Lutes says there are two main strategies for reducing the average unit cost of producing a good: specialization and diversification. Specialization – producing only one crop or animal – emerged during the transition from sustenance farming to for-profit farming. “It continues to serve farmers well, as it has for hundreds of years, but a diversification strategy combined with the knowledge gained from specialization might better meet the needs of some farms today,” Lutes said.

“Diversified production can be an advantage because it promotes a stable income by spreading income across the year,” she said. Using shared resources can create a synergy between the products that increases productivity of labor and land and decreases per unit costs. In turn, this can increase average revenue and reduce profit variability.

“However, diversified production requires that farms have the knowledge and skills to manage multiple species,” she said. It’s necessary to learn about markets that may move differently than cattle markets. Each species has different needs regarding shelter, fencing, feeding and water tank height. In addition, supporting multiple enterprises can mean more time on the farm, reducing the opportunity for off-farm jobs.

On diversified farms, one enterprise is typically less profitable than the other. This can make it tempting to move back to a single-species operation. “Trade-offs must be made between the long-term, risk-reducing effects of diversity and the perceived short-term economic loss of allocating resources to the less profitable enterprise,” Lutes said.

With the assistance of MU Extension economist Joe Horner, Lutes applied her model to compare three hypothetical farms: one with 45 cows, another with 90 goats and a diversified farm with 45 cows and 45 goats. Ultimately, the diversified farm produced the highest profit per labor hour and per acre and had the overall highest net income. The cow-only farm had the lowest cost per pound produced, which Lutes said is due to the cost-reducing effects of specialization. However, the diversified farm’s cost per pound produced was only $0.02 higher than the cow-only farm. This is the power of combining the knowledge of specialization with diversification, she said.

While this financial comparison focused on cattle and goats, they are not the only two enterprises that can complement each other on the farm.

“I’m not asking that you forget all of the strides we’ve made with production knowledge and technology,” Lutes said. “What I am asking is that you take a hard look at your operation and see if you could benefit your farm financials by diversifying and producing an additional product.”

For more than 100 years, University of Missouri Extension has extended university-based knowledge beyond the campus into all counties of the state. In doing so, extension has strengthened families, businesses and communities.