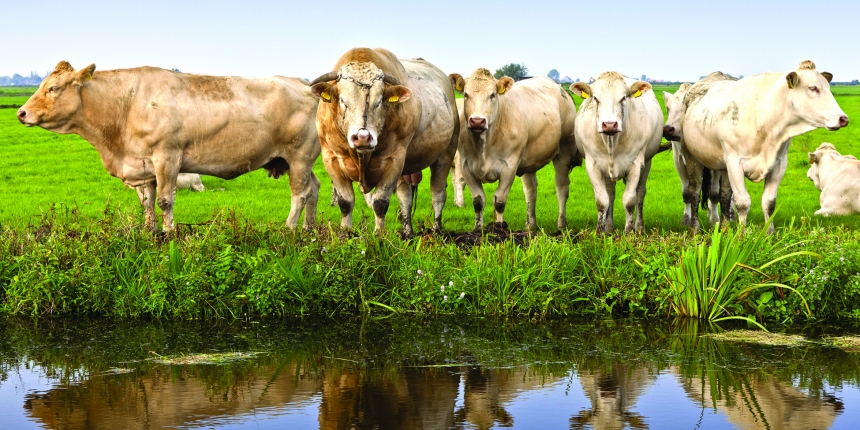 1. Bloat
The incidence of bloat in cattle grazing legumes is well documented. Bloat is caused by the rapid fermentation of legume plants that produce high levels of gas as a by-product of the fermentation. This excess gas cannot be eliminated fast enough, and the animal can die from the excess pressure on the internal organs. Its effect on reproductive efficiency is indirectly related to abortions or infertility resulting from affected animals. The report by Majak et al. (1995) provides a summary of the pasture management strategies to reduce bloat:
1. Every cultivar of alfalfa tested caused bloat.
2. Sainfoin,cicer milkvetch, and birdsfoot trefoil are legumes that did not cause bloat.
3. Advanced stages of maturity of the alfalfa plant will reduce the probability of bloat.
4. Cattle susceptible to bloat will have a slower passage rate in the rumen (allowing more time for gas production) and these cattle would also consume 18-25% less forage before bloating than non-bloaters.
5. Mineral supplementation did not reduce the incidence of bloat.
6. The only additive tested that would reduce bloat was poloxalene.
7. Seasonal weather conditions, including a killing frost, did not influence the incidence of bloat.
8. Waiting until the dew was off alfalfa before grazing was substantiated as a method to reduce bloat.

9. Cattle that had continuous access to alfalfa had less bloat than those that had access for shorter periods of time each day.

2. Grass Tetany
Grass tetany is a serious problem in many livestock herds. It is characterized by low blood serum levels of magnesium from a dramatic deficiency of this mineral in forages and pastures. Symptoms of grass tetany (winter tetany, grass staggers, magnesium tetany) usually first appear as extreme nervousness, an awkward gait, muscle spasms, and collapse. The symptoms may progress rapidly. Therefore, sometimes no clinical signs are observed and a cow may simply be found dead. Other symptoms may include grinding the teeth, violent convulsions, and coma. Cows suffering from grass tetany may often resemble those with cases of milk fever and have low calcium as well as low serum magnesium levels. A positive diagnosis is difficult to obtain, but the status of the herd may be evaluated through blood samples. Serum magnesium levels below 1.0 mg/100mL would indicate magnesium levels low enough to result in grass tetany.
Grass tetany can occur at almost any time of the year, but most often will occur in April and May in the Northeast. Other conditions which are favorable to the incidence of grass tetany include:
•  Warm temperatures in early spring followed by cool, cloudy weather.
• It occurs more often in cows 6 years old or older nursing calves under 2 months of age.
• Grass pastures which contain few or no legumes are the most likely to cause grass tetany.
• Soil types that have a high level and availability of potassium are related to increased cases of grass tetany.

Prevention
• Keep magnesium additions to mineral supplements available from May until October. Commercial mineral mixes that are high in magnesium are readily available. A mix can be made at home, which also features a selenium supplement, with the following recipe (Wahlberg, 1995): 22.5% trace-mineralized salt, 22.5% dicalcium phosphate, 10% of a 0.06% selenium mix; 22.5% magnesium oxide, and 22.5% ground corn. Cattle should eat about one-fourth of a pound of the mixture daily.
• Wait until early spring grass growth reaches 8-10 in. before grazing.
• Graze grass-legume pastures first in the spring. Cases of grass tetany are seldom seen when legumes are included in pastures. 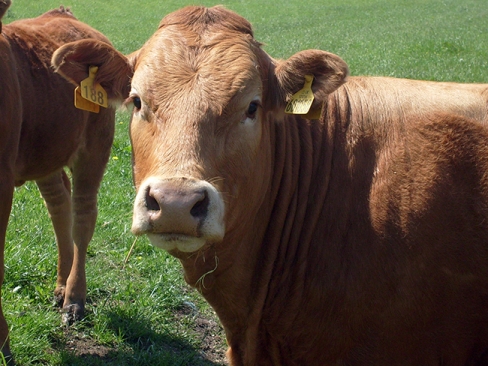 • Graze heifers, stockers, and dry cows on high-risk pastures
• Identify cows that suffer from grass tetany as they tend to be more susceptible in following years

Treatment
Cows that suffer from grass tetany and go down for more than 12 hours seldom recover. Those in more early stages should be handled gently and quietly. Stress and exertion will often cause infected animals to go down or die suddenly.
An emergency treatment includes preparing 200mL of a saturated solution of epsom salts. This solution should be injected under the skin of the animal in at least multiple sites with 10 mL injected at each site. A veterinarian should be consulted to provide intravenous magnesium supplements.

3. Prussic acid poisoning
Most plants contain intact glucosides, but, under certain conditions of climate, fertility, stage of growth, or retarded growth, a buildup of cyanide-containing compounds can result. This is particularly true for sorghum, sudangrass, and their hybrids. The resulting compound in the leaves of the plant is referred to as prussic acid. Some of the conditions that result in high levels of prussic acid in the plant include:
• a high nitrogen to phosphate ratio in the soil
• the upper, younger leaves of the plant, or regrowth.
• newly-frosted leaves of the plant extended drought preventing leaf maturity and growth regrowth of the plant following a frost
Grazing management is the key to avoiding prussic acid poisoning in grazing cattle. Vough and Cassel (1988) have outlined some management steps to avoid prussic acid poisoning:
• use certified seed
• select varieties low in prussic acid
• follow fertilizer application recommendations
• do not begin grazing until plants have reached a height of 18 to 20 inches
• allow frosted sudangrass to thoroughly dry before pasturing
• dilute intake of infected material with hay and other forages

4. Hardware Disease
Foreign objects that cattle may ingest (wire, nails, pins, screws, bolts, or glass) collect in the reticulum. The objects may puncture the wall of the reticulum, which can cause infection or damage to surrounding organs, especially the heart. Symptoms of hardware disease include loss of appetite, no cud chewing, swelling of the neck and brisket, and stiffness. The objects will normally have to be removed surgically. In some cases a magnet placed in the stomach may be used to remove metal objects (Gillespie, 1997).

5. White Muscle Disease
Deficiency of selenium in the soil can result in animal deficiency of this mineral. This problem may manifest itself as white muscle disease in young calves and reduced immune response in older cattle. Muscle damage results from lack of selenium. Calves are born weak or dead. Selenium injections for newborn calves and mineral supplementation for cows will prevent white muscle disease. A mineral mixture with an average daily intake of one fourth of a pound per day should contain 0.08% selenium to provide the recommended 0.2 ppm selenium daily. Intake of selenium at 5-10 times the recommended levels can result in toxicity.

6. Foot Rot
The report by Hudson (1982) provides an excellent summary of the causes and prevention of foot rot. Foot rot can become “seeded” in the soil, and it may persist for a long time. The incidence of foot rot may be variable in a given herd. The bacterium Fusobacteriumnecrophorum has been reported to cause foot rot. However, researchers have not been able to reproduce typical foot rot lesions with this organism. Other organisms commonly isolated from animals with foot rot include streptococci, staphylococci, corynebacterium, and various fungi, all of which are common in the environment, especially where moisture is present. Cuts, bruises, puncture wounds, or severe abrasions permit these bacteria to enter the tissue of the foot to start an infection. The inability to cause foot rot in clinical trials has hampered the ability to recommend precise prevention and treatment procedures.
Symptoms include lameness which is followed by swelling of the foot, spreading of the toes and reddening of the tissue above the hoof. In severe cases, the foot will abscess above the hoof with a discharge that has a characteristic foul odor. The animal usually has an elevated temperature with loss of appetite and body weight. If the infection is not stopped, it will invade the deeper tissues of the foot and may invade one or more joints, causing chronic arthritis. 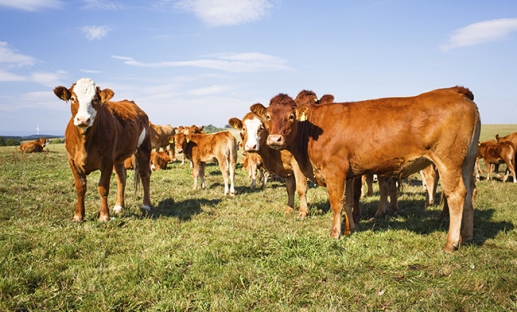 Prevention
Management practices that help reduce hoof damage or avoid bruising will help decrease the incidence of foot rot. They include:
• Keep the hooves of heavy cows and bulls trimmed to help reduce stress on the soft tissue of the foot.
• Maintain drainage of lots and around water tanks to prevent mud accumulation, particularly when the mud freezes and causes the feet to be bruised.
• Walk-through foot baths in dairy operations have been used to help prevent foot rot. Copper sulfate (dissolve 2 pounds in 5 gallons of water) or formalin (1 gallon of 40% formalin in 9 gallons of water) can be placed in the door or alleyway where the cattle walk coming into the barn.
•Ethylene diamine dihydriodide (EDDI, tamed iodine) mixed in the feed or salt to provide 50 milligrams per head per day has been used as a preventative measure. However, feeding EDDI has not been a very satisfactory control for foot rot. Over-consumption of the chemical can cause irritation of the respiratory tract.
• Be sure that all cattle receive adequate calcium, phosphorus, and vitamin A for good bone and tissue health.

Treatment
Early treatment is necessary to prevent animals from becoming chronics. Examine the feet of lame animals for foreign objects such as wires, nails, etc., and treat as soon as possible. Antibiotic treatments are usually successful, and consult a veterinarian for the appropriate drug, delivery method, and prognosis. Penicillin, or the oxytetracyclines (terramycin, liquamycin, and oxy-tet) usually work well if given at the recommended dosage and treatment is started early. Sulfonamides (sulfapyridine, sulfamethazine, or triple sulfas) have been used successfully. Feed additives containing chlortetracycline (aureomycin) or a combination of chlortetracycline and sulfamethazine can be used for treatment on a herd basis. To be effective, the minimum dose for calves should be at least 1 gram of chlortetracycline per animal per day. Increase the amount of antibiotic for larger animals. Lower dosages may contribute to the production of drug-resistant organisms. When foot rot fails to respond to medication, thoroughly check the foot for foreign objects.