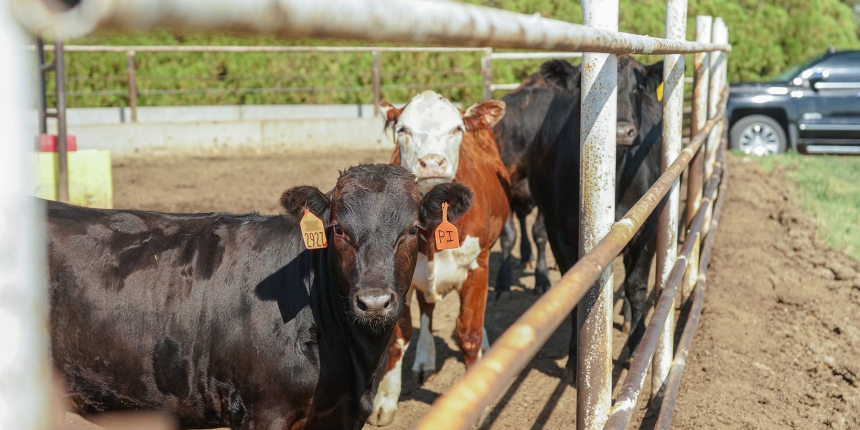 BVD is known to be one of the most economically detrimental diseases we face in the cattle industry. Every year, calves Persistently Infected with BVDV cost the beef industry an estimated $1.5 to $2.5 billion through death, sickness, increased medicine costs and reduced performance. Even with top-of-the-line vaccines, producers may not be getting the results they expected. Industry professionals from several notable animal health companies have published articles stating that having a program which includes PI testing, biosecurity and sound vaccines is key to managing BVD.

Industry Data
Removing BVD-PI animals has many health and performance benefits. BVD suppresses the immune system of cattle, making them more susceptible to common pathogens they could otherwise fight off, increasing both morbidity and mortality. There is some data showing BVD may be a big factor in BRD. One study showed BVD was present in 40% of fatal BRD cases, another showed it was present in 62.5% of fatal BRD cases. In 2005, Dr. Loneragan published a study that showed exposure to a BVD-PI animal resulted in a 43% increase in respiratory diseases.

There have not been many studies that look at the cost implications of BVD exposure in a stocker/backgrounder setting. One study by Dr. Grooms and Dr. Brock in 2002 showed a cost around $10.00 per head exposed in treatment costs alone.

In a study published by Dr. Bill Hessman, DVM in the American Journal of Veterinary Research in 2009, it was shown that a testing and removing strategy reduced Feed to Gain ratio by more than half, it reduced the Cost of Gain by 32% and increased Average Daily Gain by 20%. This is important now more than ever with the high cost of feeding cattle. This study was based on over 21,000 high risk calves in a starter feedlot. Economic analysis of this study revealed that fatalities accounted for losses of $5.26 per animal and performance losses were $88.26 per animal exposed.

One testing and removing model by Mallory Vestal, assistant professor at West Texas A&M University showed a return of $27 per head when testing for and removing PI animals.

Thoughts from Cattle Producers
Kirsten Roberts with Fox Creek Cattle Company in Hopkinsville, KY is a believer in testing for BVD-PI calves. Fox Creek Cattle Company is a backgrounding operation. “We have increased our turnover rate by 500+ calves every year. We firmly believe many of the major health issues we struggled with prior to testing were undetected PI’s.” Kirsten goes on to say, “The calves stay healthier and gain weight faster, as there’s no backing off feed due to illness. There is a greater immune response from vaccines.  The doctoring and pull rates are well below two percent on non-exposed groups. We still get an occasional chronic, it’s just the nature of the business; but our health, weight gains, and feed conversion are so much better when we PI test, remove the PI positive, and quarantine the exposed group because the disease isn’t being spread over the whole farm.”

When asked if she thinks other producers should test, her response was simple, “You are risking losses on so many levels that I would have a difficult time understanding why one would not test, especially on a stocker/backgrounding operation. There are many aspects to managing cattle well, and PI testing is just one of those aspects that is worth the peace of mind, time, and effort. It’s very simple and worth every penny!”

Margaret Ann Smith with Southlex Cattle Company has been testing since 2010. Southlex is an order buying, stocker and feeder operation out of Virginia that specializes in buying and selling feeder cattle from the Mid-Atlantic and Southeast to customers all over the US. Margaret mentioned “We find that any tool that can eliminate a layer of stress from the cattle when starting high-risk cattle is a must.  Our mortality and morbidity are much reduced. While we only find on average 2-3 positives per 1000 head started- the risk is too high to not test!”

Pete Bonds with Bonds Ranch out of Saginaw, Texas thinks it’s important that cattle producers understand where the risk comes from and how to mitigate it. He mentioned a story of some cows they bought, “One year we bought 500 cows out of a sale barn and sent them to West Texas. That year we had 27 PI calves born from those cows. That is 5.4% PI prevalence rate. The average we would expect is 0.2%. We believe that much of this exposure on this set of cows came directly from the sale barn.

Until we as an industry understand more about where PI calves come from and where the cow is becoming exposed, PI testing is an incredibly necessary tool for anyone who is purchasing bred cows and calves from a sale barn, and all calves who have been in a sale barn environment whether in utero or as a live calf should be PI tested in order to minimize the risk of spreading BVD.” Bonds Ranch is a commercial cow/calf, stocker and fed beef cattle operation that believes everyone should test for BVD-PI animals. “It’s worked for us, what we have eliminated is that set of cattle that is a complete and total wreck. We might still have the death loss but we do not seem to have the wrecks that we used to.”
“We PI test everything in our Schwertner Select Program, it has reduced our morbidity by half.” – Jim Schwertner, Capitol Land and Livestock.

BVD is a complicated matter and controlling it is no different. Controlling BVD takes a multifaceted approach; a combination of PI testing, biosecurity and a sound vaccine program. Central States Testing was the first commercial testing laboratory for BVD-PI animals. We have led or aided in research for various companies, universities and governments. Having tested over 10 million head, no one has more experience with BVD. If you want to learn more about BVD-PI testing, visit the lab at cstbvd.com.