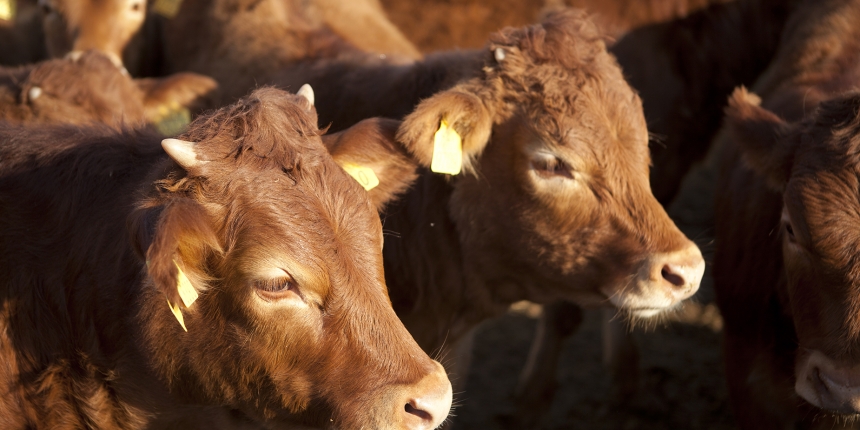 Management practices exist to increase standing forage quality, but management of forages for the calf only can be difficult. Likewise, increasing milk production of the dam increases the nutrient requirements of the dam and reduces the number of cows that can graze a fixed nutrient resource base, and possibly result in a need for supplemental feed.
Creep feeding studies consistently have shown an increase in weaning weight. Creep feeding of beef calves usually is reserved for certain market/management situations such as high calf prices, low feed prices, dry lot operations, fall-born calves, and purebred bull calves. Because there are data that suggests noncreep fed calves catch up with their creep-fed mates post-weaning, the greatest return is realized if calves are sold at weaning.
Under severe drought conditions, creep feeding can be used to sustain minimal calf growth. A risk of creep feeding is getting calves too fat, resulting in price discounts or lowered lifetime milk production of heifer calves intended to become replacements for the cow herd.
Creep feeding must be carefully appraised in view of the economics of cost of gain, potential market, and the influence on sale price of calves.
During drought conditions when cows are nursing calves, instead of creep feeding calves to sustain a targeted weight gain, producers should consider early weaning. Creep feeding calves in drought conditions does not result in lowered nutrient requirements of the dam. Data would suggest that creep fed calves still nurse. In drought conditions producers may want to consider early weaning the calves, especially if they have the facilities to feed lightweight calves, because they are very efficient at converting feed to weight gain. Information on this management alternative can be found in NebGuide G2047, Management of Early Weaned Calves. 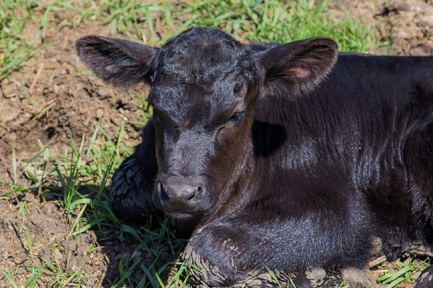 Nutrient Requirements and Ration Composition
The dam supplies part of the nutrients needed for calf growth through her milk. For spring-born calves, milk and vegetative forage should allow for adequate weight gain. As the calf gets older, the amount of milk produced by the dam decreases and it becomes more difficult to meet the calf’s nutrient needs. In addition, for spring calves, the quality of grass decreases in late summer and fall; again, there is usually insufficient protein or energy in the forage for optimum gain.
If it is decided to creep feed calves nursing their dam, the ration must be energy and protein dense. This is because the rumen of the calf is small, so the calf will not eat a large amount of feed. As an example, for a 220-pound calf to gain 2.0 pounds per day, it must consume about 7 pounds of feed (milk, forages, plus creep feed) on a dry matter basis. The ration needs to supply 1.32 pounds of protein/day and 5.0 pounds of TDN/day (0.70 Mcal/lb NEm; 0.44 Mcal/lb NEg). Example rations are in Table I.
Not only must a creep ration be nutrient dense, it must be palatable. Most commercially available creep rations are pelleted and highly palatable. For creep rations that are not pelleted, the ration must be dust-free and uniformly mixed so the calf cannot sort out ration ingredients. If liquid feed ingredients are added to the creep feed, they must be included at a level that doesn’t impede creep feed flow through the feeder. Rolling or coarsely cracking grains rather than fine grinding, helps reduce dust and will also reduce rumen upsets of home-mixed creep diets.
Simple mixtures of grain and protein supplement make satisfactory creep rations. Pelleted creep rations are handled easily and will have less feed waste. Bulky feeds such as oats or wheat bran should be included to protect against overeating. Both ground oats and bran are good feeds for getting calves started on feed.
Salt can be used in the creep ration to keep daily consumption of the ration to less than 3 pounds per head per day. When using salt to limit daily intake to get calves started on creep, use 0-2.5 percent of the ration as salt. After calves are eating the creep ration it may be necessary to increase salt up to 10 percent of the ration. When using salt to limit intake, use a grain-based mix (corn or milo). It is easier to incorporate salt into this type of ration than into a creep feed that is already pelleted.
Ionophores are feed additives that increase feed efficiency and average daily gain. These compounds also can be used to control coccidiosis. Examples of an energy creep ration, salt-limited creep ration, and a high protein creep ration are shown in Table II. For more information on using salt to limit feed intake refer to NebGuide G2046, Limiting Feed Intake with Salt in Beef Cattle Diets. Intakes of salt limited creep feeds are usually between 2 to 4 lb per head per day. Advantages of using salt to limit the intake of the creep feed, especially when used the last 60 to 90 days pre-weaning are: 1) moderate weight increase without excessive amounts of flesh on the calf, and 2) improved feed conversion as compared to creep feeds of which calves have unlimited access. 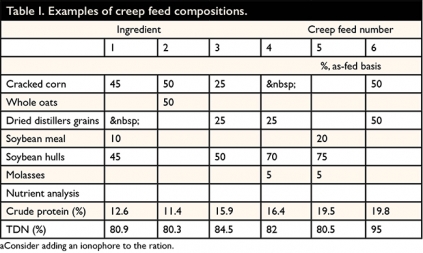 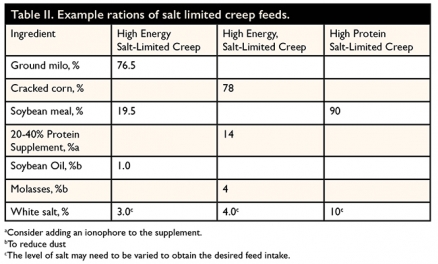 Post-weaning Performance and Carcass Traits of Creep Fed Calves
Generally, the greatest benefit of creep feeding is realized if calves are sold at weaning. There are conflicting data as to whether the added weight achieved using creep feeding is still realized at the end of the finishing period. There are data that suggest that noncreep fed calves will weigh similar to creep fed calves at the time of harvest. How calves are managed and fed after weaning would influence these weight differences. Calves that are managed for a low gain post weaning may not benefit from creep feeding, especially if they are fat. Again, creep feeding will benefit calves that go directly to the feedlot after weaning or sold within a few months of weaning. Creep fed calves will know how to eat out of a bunk and there will be less stress for these calves; therefore, less morbidity.
Finished calves that have been creep fed can have increased marbling at the time of harvest. Research suggests that marbling genes are influenced early in the calf’s life, particularly in calves creep fed for at least 80 days. In order to retain the response of creep feeding on marbling, calves need to be placed in the feedlot after weaning and fed a grain-based diet.

For Replacement Heifers
Creep feeding can negatively influence replacement heifer performance by depressing future milk production and lifetime productivity. Heifer calves fed a high energy ration before weaning can develop fatty tissue in the udder that consequently lowers milk production, compared to those heifers not fed high energy creep rations. This impairment of future production can occur before the heifer reaches 3 months of age. Adequate, but not high amounts of high energy feeds are needed for heifer calves to reach sexual maturity by the time they are 13 to 15 months old. Heifer calves may be creep fed if their dams don’t produce enough milk in relation to the calf’s nutrient needs. Examples include young cows, old cows, drought conditions, or heifer calves that have exceptional genetic growth rate relative to their dam’s milk production. Supplemental feeding of heifers before 6 to 7 months of age may be necessary for them to reach puberty by 13 to 15 months of age. Under most circumstances, it is easy to achieve the desired gain without the use of creep feeds. A possible exception could be for fall-born heifers.

Starting Calves on the Creep Ration
Calves often nibble at grain when they are about 3 weeks of age, but will not eat appreciable amounts before they are 6 to 8 weeks old. If cows are grazing lush pasture and milking well, it is often difficult to get calves started on creep feed. Calves can be encouraged to start eating creep more quickly by:
• including palatable feed such as ground oats, wheat bran, cottonseed hulls, molasses;
• using an older calf that is already eating; or
• locating the feeder close to where cattle frequently congregate (water, shade, etc.).

Creep Feeder Design
Plans for constructing creep feeders for calves are published in MWPS-6, Beef Housing and Equipment Handbook, which is available at extension offices or online. The feeder should be roofed to protect feed from rain and should hold at least a week’s supply of feed. This will depend on the size of the feeder and the number of calves it will accommodate. Allow 4 to 6 inches of trough space per calf. A feeder that is 8 feet long and feeds from both sides (16 feet of linear trough space) will accommodate 30 to 50 calves. The feeder should be portable. If a fence is used around the feeder to keep the cows out, the entrance for the calves should be 1 foot 4 inches to 1 foot 6 inches wide by 3 feet high. Feeders not enclosed by a fence or a perimeter barrier should be made strong enough to prevent cows and bulls from destroying the structure. 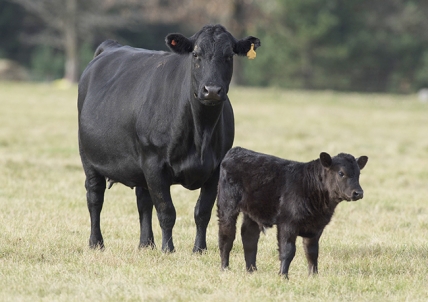 Location
For starting calves, locate the creep feeder near water or shade where cows rest frequently. Cows need to take calves to the creep until most calves have learned to eat. Once calves are eating, good pasture and range management dictates the creep be located away from water. Moving the feeders during the late summer and early fall may be desirable, especially in sandy soils to reduce vegetation damage. Large pasture or range situations may require more than one creep feeder for reasonable increases in rate and efficiency of gain from creep feeding.

For Starting Calves on Feed
Calves started on creep rations before weaning begin eating sooner after they are weaned or shipped. They usually recover weaning or shipping weight losses in a shorter period of time and have lower morbidity and mortality rates, compared to calves that do not begin eating after being weaned from their dams. Some producers will creep feed calves while they are still with their dam for a short period of time, two to four weeks before weaning. This practice is used to bunk-break the calves before weaning so at maternal separation they are eating.

Calculating Returns from Creep Feeding
Market price of heavier, fleshier feeder calves is usually lower than for those with less condition. When cattle prices are high relative to feed prices, we can expect relative high price discrimination, as weights increase for calves of the same frame size and/or genetic potential. Only if cattle prices are low relative to feed prices may a premium exist for the heavier calves.
Net return calculations only consider the cost of the creep feed (Table III). Cost of feeders, equipment, and labor should be considered before initiating a creep feeding program.
These calculations should be completed before creep feeding to determine if the management practice is cost-effective. For high energy creep feed, use a feed to gain of 6:1 to 8:1.

Creep Feeding Strategies and Tips. By...

An Evolution of Sorts

An Evolution of Sorts. By Maura Keller....