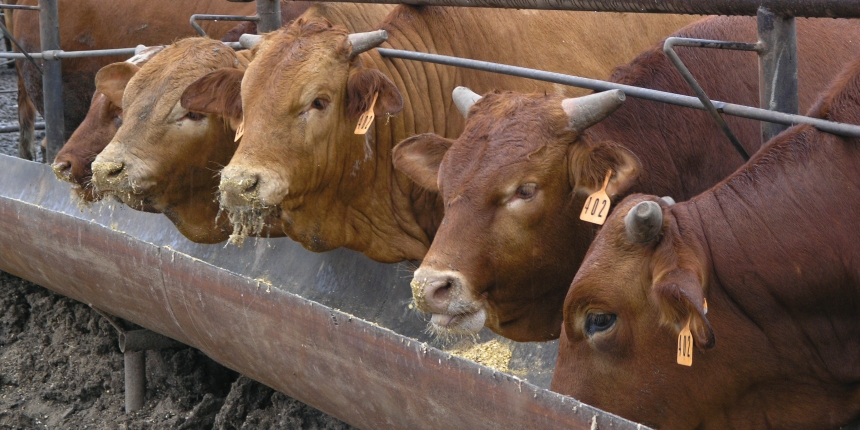 When Tom Lasater developed the Beefmaster breed, the beef industry of the 1930s–1950s was very different than today. There were no modern selection tools such as EPDs (Expected Progeny Differences), ultrasound for live animal carcass evaluations or Genomics (DNA) to help identify superior animals. Making genetic progress was difficult, but over time it helped develop the Beefmaster breed. Through following a well thought-out breeding program that utilizes a cross of Hereford, Shorthorn and Bos Indicus genetics, then selecting the most adaptable, performance oriented animals and breeding only the best, the Beefmaster breed was then born in the harsh brush country of South Texas.

The genetic combination of roughly 25% Hereford, 25% Shorthorn and 50% Bos Indicus (specifically Gir, Guzerat and Nelore) proved to be very prolific. The resulting composites were selected using the Six Essentials and over time proved themselves to be very predictable. The unique genetic makeup of Beefmaster yields 63% Retained Heterosis, a vital statistic for the profitability of commercial cattlemen. USDA recognized Beefmaster as a breed in 1954.

Why is Crossbreeding Important?
As of 2015, the U.S. has the smallest beef cow herd we have seen as a nation since the 1950s. While our cow herd has become smaller, our human population continues to increase at a rapid pace. The demand for protein in higher quality diets across the world has increased the demand for beef. It takes a long time to expand a cow herd. That is why it is so important to create as much efficiency as possible in the beef supply chain. Planned crossbreeding with Beefmasters is the fastest way to create efficiency and profit in the cattle business.

The U.S. cow herd is dominated by black-hided, British breed-influenced genetics. These females excel at raising calves that produce high-quality carcasses for the consumer and that is very important. Over time, to earn premiums for their calves, many producers have begun straight breeding their commercial cows. True, those black-hided British calves earn a premium at the sale barn but at what cost to the producer?

Crossbreeding using Beefmasters is a proven method to increase maternal efficiency and calf performance, resulting in more cost savings and profit for the beef producer. How do we know that crossbreeding works? There have been countless scientific research projects on the effects of Heterosis (the scientific name for the result of hybrid vigor that occurs with crossbreeding) in livestock production. Time and again, crossbreeding has proven to be the single most effective way to increase productivity in commercial cow herds.

Heterosis or hybrid vigor, is the result of crossbreeding. Heterosis leads to performance advantages in crossbreds over the average of their straight-bred parents. When used properly, as in a well-planned crossbreeding program, heterosis can lead to big improvements in performance and efficiency. That in turn leads to more profit for the beef producer.

There are three types of heterosis and how well a breeder harnesses these types will determine how much impact hybrid vigor will have on his calf crop.

Individual heterosis, directly affects several traits that are economically important. These improvements actually begin before the crossbred calf is born because the fetus is more viable and resilient. After birth, crossbred calves are more vigorous resulting in more live and healthier calves. Growthier, heavier calves at almost every point are a result of crossbreeding. True, crossbred calves can also have heavier birth weights but the improved calf survivability of crossbred calves overshadows those concerns. Who can say no to more live calves born, more calves surviving to weaning and the bonus of those calves weighing more?

Maternal heterosis are the effects that come from using crossbred cows. Those effects are very profound for maternal traits. It all begins with fertility which is lowly heritable. Crossbreeding leads to big improvements in lowly heritable traits such as fertility, resulting in more calves born in a shorter time frame. The calves of crossbred mothers are more vigorous, grow faster and weigh more. As long as we sell cattle by the pound, these improvements are vital. While this is impressive, the big impact of crossbred cows come from having a longer productive lifetime and producing more calves. Given the cost of replacement heifers in today’s market, a cow that produces for three more years (at a minimum) is a big advantage. Beefmasters excel in maternal traits. Beefmaster sired females add even more punch to your crossbreeding program.

The chart demonstrating the impact on individual and maternal heterosis on production is truly eye-opening. As you can see, crossbreeding pays dividends. Old time cattlemen used to say that “hybrid vigor is the only free lunch in the cow business.” 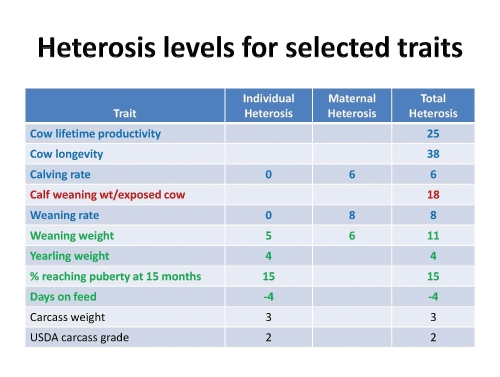 Keeping a crossbreeding program simple is the key to success. Stressing the genetic differences between breeds used in crossbreeding is important. The more unrelated the breeds being used are; the more of an impact heterosis will have. Crossing British breeds such as Angus x Hereford works very well but there are genetically similar. Crossing British breeds with Continental breeds such as Angus x Charolais yields better performance results because those two breeds are less related than Angus x Hereford. Crossing British breeds with an American breed such as Angus x Beefmaster leads to even greater advantages because of the Bos Indicus influence in Beefmaster. The roughly 50% Bos Indicus content in Beefmaster is totally unrelated to the British genetics in this cross; resulting in even higher heterosis impacts for all traits. The icing on the cake for this particular cross is the outstanding maternal heterosis that leads to superior females that are more fertile, wean more and larger calves and live longer more productive lives.

To maximize heterosis potential and to keep a crossbreeding program simple, many ranchers use a terminal crossbreeding program. A great example is Angus x Beefmaster to produce a crossbred female that is designed to maximize maternal heterosis. Then those Angus x Beefmaster crossbred females would be mated to Continental bulls such as Charolais to maximize performance potential in their calves. This mating system leverages the genetic diversity across British, Continental and American breeds resulting in higher performance at every level and exploits breed complementarity needed to maximize production and profit.

In today’s beef industry that demands efficiency, Beefmasters answer the challenge by being exceptional convertors of feed. In multiple all-breed bull development facilities that measure feed efficiency and residual feed intake, Beefmasters consistently rank as the most efficient convertors when compared to other breeds in the same facilities. In commercial feedyards, dry matter conversions in the five pound range are typical for Beefmaster sired steers. Ask any cattle feeder and they will tell you the importance of feed conversion and performance. While maternal heterosis is the main calling card for Beefmasters, it should be noted that carcass merit is not overlooked in this versatile breed. Given the prominence of black-hided commercial cows in today’s industry, it is interesting to look at a Beefmaster progeny test performed by Texas A&M University (TAMU) from 1998-2001.

Commercial Angus cows from the TAMU McGregor Experiment Station were mated to five Beefmaster bulls. TAMU staff collected the complete performance information from the calves that were all born, grown and finished at the McGregor Station. Additionally TAMU scientists and USDA Graders collected the carcass data, including Warner-Bratzler Shear Force tests after the cattle were harvested at Sam Kane Beef Processors in Corpus Christi, Texas.
The results for the 258 Beefmaster x Angus progeny were impressive. Seventy-two percent of the cattle received a quality grade of Choice or Prime while the average yield grade was 3.28. In today’s sophisticated grid marketing systems, these cattle would have earned solid premiums. Since that project was conducted, Beefmaster breeders have worked very hard to add even more carcass merit by utilizing ultrasound carcass data and now genomic tests to improve the quality of their end product. Time and again Beefmasters have proven themselves a great crossbreeding partner with black-hided and Continental cattle both in the yard and on the rail.

No breed of cattle is perfect. Beefmaster breeders realize that. That is why planned crossbreeding is so important to the future of the beef industry. Beefmasters are the most versatile crossbreeding tool available. Beefmaster’s 63% retained heterosis means superior females, more fertility, heavier weaning calves, more longevity, significantly more lifetime production and the list goes on. If you want to add more productivity and efficiency to your herd then add Beefmasters to your crossbreeding program.