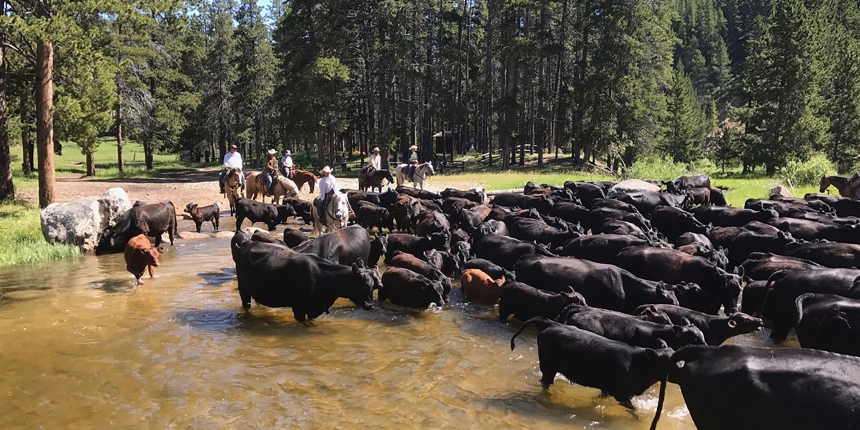 Dairy cows are used to being milked.  Beef cattle are not.  Yet sometimes you need to milk one, to get colostrum for her newborn calf.  The Udderly EZ milker invented by Buck Wheeler was originally for milking mares--whose small teats can be difficult to milk by hand.  It was a trigger-operated pump, held with one hand.  A soft flange fits over the teat, snugly against the udder, with a bottle attached.  A few squeezes of the trigger create vacuum and suction--and quickly fills the bottle with milk.

The mare milker was so successful that Wheeler created Udderly EZ milkers for sheep, goats, camels, and cattle.  Beef producers find it useful for obtaining colostrum, milking out a cow with mastitis, etc. since it is so much safer and easier than trying to milk the cow by hand, and much more effective.

The Ultimate EZ Milker is an updated version connected to a compressor.  It can milk more than one teat at a time if desired, safely and efficiently.  It has an adjustable suction vacuum and the silicon inserts are tapered and gentle on the teats with perfect fit.  This automatic milker is quieter than other electric milkers and gentle enough to use on animals with painful mastitis.

Dr. Richard Phipps, a large animal veterinarian and rancher in Banner, Wyoming says the beef industry can benefit from this tool.  “Some people might think it would hurt the udder if used very often, but it has less suction power and pull than a calf suckling, and the pulsation makes it easy on the teat,” he explains.

“The pulsation is in tune with the heartbeat and also prevents continuous sucking pressure.  A calf does the same thing, giving intermittent slurps.  It’s like you sucking on a straw; you can’t suck continuously because you have to stop and breathe.  Intermittent sucking action of a calf releases pressure on the cow’s teat and udder; pulsation on this milker does the same thing,” he says.

“I’ve put a stethoscope on the udder when using the pump, and every time there’s a burst of milk going into the jug there’s a heartbeat.  Pulsation is essential.  You don’t want continuous suction vacuum on the teat because it might cause injury.  The pulsation releases the pull on the udder just enough to let it relax,” explains Phipps.

If a cow has mastitis, he uses the pump to draw all that junk out and get the quarter milking again.  “This can also help if a cow has plugged teats at the start of lactation, and not just for mastitis.  It is also handy to collect colostrum to freeze for emergencies,” he says.

“If a wild heifer doesn’t want to mother her calf, you can put her in the squeeze chute and get all her colostrum and feed it to her calf.  The old fashioned way was to rope or restrain the cow and milk what you can by hand, but that’s not very effective.”  The cow is stressed and won’t let down her milk; you don’t get as much.

“With this machine, the pulsation helps relax the cow and stimulates milk let-down, like when a calf suckles.  It’s a natural kind of action and triggers release of oxytocin in the cow.”

If he has a cow with big teats when she calves, he puts the large teat cups on those big treats and milks them down to where the calf can get on them and take over.  “Before, we were doing it by hand and it was a lot harder.”

He uses the EZ milker frequently—at home and on client cows.  His Ultimate Ez™ Electric Milker that he takes with him uses the 300-Watt Inverter with a Milwaukee 18-Volt, 6-Amp Battery, making it totally portable.

“My wife uses one all the time on our ranch because she takes care of the cows when I’m off doing my veterinary work.  When a 100-pound gal can operate this thing to obtain 8 or 9 gallons of milk in 20 minutes, this shows how well it works,” he explains.

“I have a cow right now in my barn that has a sensitive udder and won’t let her own calf suckle; she prefers the milk pump.  It’s more comfortable, because the calf is always pulling, tugging and bumping her udder.”  If the udder is tight and full, a calf nursing and bunting creates discomfort.

John and Ruth Owsiany farm in southeast Michigan and have used the EZ milker on their Angus-Simmental beef cows at calving time since 2012.  They liked it so well they bought a second one in 2016 just to make sure they always have a spare.

“We have 80 cows, and when they calve, if there’s any question about whether the calf will nurse the cow soon enough, in the past I milked by hand to get colostrum to feed the calf.  We’d bring the cow into another part of the barn, run her through a squeeze chute and get colostrum.  Some cows with small teats are hard to milk by hand,” he says.

“If a cow calves in the evening we just milk her and feed the calf, and can go back to the house and not worry about him not nursing.”  In cold weather, some calves don’t get up and nurse soon enough before they get chilled.  It only takes a few minutes to milk the cow and feed the calf.  If a cow has extra colostrum they freeze for emergencies, or use it for another newborn calf.

“We had one calf that went about 6 hours before it nursed, born in the middle of the night.  We thought it was sucking the cow, but it wasn’t.  We checked the cow closer and realized that calf hadn’t suckled.  This milker is handy, to get colostrum and get it into the calf,” he says.  It’s a lot faster than trying to milk by hand.  Some beef cows are hard to milk by hand, or won’t let their milk down.

“Other ranchers in our area, and even our veterinarian, buy commercial colostrum for calves that can’t nurse, but those products aren’t as good as real colostrum,” he says. The best colostrum is from one of your own cows, because they have been exposed to all the diseases on your farm and create antibodies against those specific diseases.