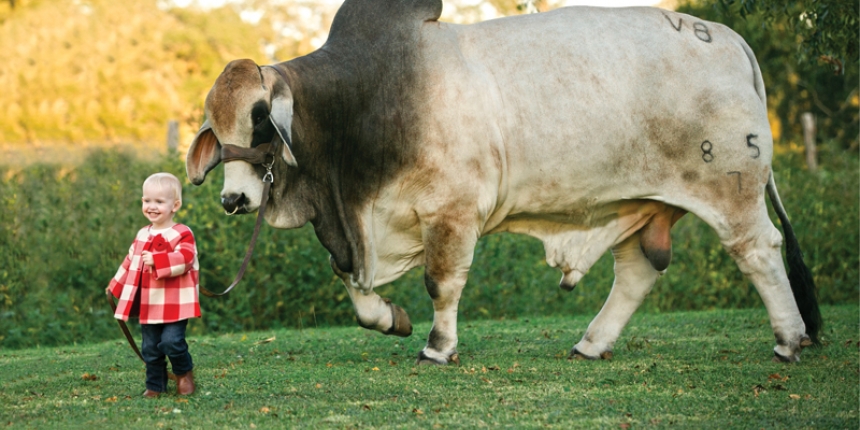 Texas summers can be so hot that eggs fry on concrete. It’s been said you can’t visit Texas without something sticking you, biting you, or stinging you. While these may be environmental extremes, many cattlemen throughout the United States and more than half of the world endure ranching conditions that aren’t perfect for cattle ranching — unless you have a little Brahman influence.
The American Brahman breed was developed in the United States in the early 1900s, and since then has revolutionized the southern beef industry through its role in crossbreeding. Yet even today, some cattlemen are hesitant to use the Brahman breed because of misconceptions that exist. V8 Ranch, one of the largest Brahman seedstock operations worldwide and NCBA’s 17th largest U.S. seedstock operation is working to dispel these notions through actual data and producer education.

A Century of Passion for Brahman Excellence
V8 Ranch, owned by Sloan and Mollie Williams, is a 4-generation working family ranch whose passion for Brahman cattle excellence spans more than 100 years. Both Sloan and Mollie have strong roots in the Texas cattle industry: Sloan’s family maintained a commercial operation and Mollie’s parents were the founding members of J.D. Hudgins Forgason Division. The couple built a thriving rodeo stock contracting business and a herd of commercial and purebred Brahman cattle. Their son, Jim Williams, was especially interested in the purebred Brahman breed.
Originally, east Texas cattleman Howard Parker founded V8 Ranch in 1944. The herd was known for excellence in Brahman females and gentle dispositions. In 1971, Parker expressed an interest in selling his operation. When Sloan heard of this opportunity, he and Mollie decided to risk it all to purchase the V8 herd. They sold their award-winning stock contracting business and their red Brahman cattle to negotiate the $1 million dollar deal.
“I heard that Mr. Parker wanted to sell the ranch on the day before Christmas,” reflects Sloan. “We were on a family ski trip at that time. I made the deal over a pay phone in Red River, New Mexico,” he reflects.
Since then, the Williams family has devoted their lives to the Brahman breed and it’s promotion, education, and association service — and they’ve achieved tremendous success. In 2012, V8 Ranch was named Seedstock Producer of the Year by the Beef Improvement Federation. The ranch has won more International and National Grand Championships in Brahman show competition than any other ranch in Brahman history — 81 and counting. They have exported cattle to more than 40 countries worldwide. They have built a business that currently sustains 4 generations of their family members. But of all their accomplishments, they are most proud of the role of their herd in the U.S. beef industry, says Brandon Cutrer of V8 Ranch.
“About 80% of our customers are commercial cattleman in the United States,” he says. “Every year we sell around 100 bulls and 200 registered Brahman females that will be used in commercial operations in the south.”

Visual Quality, Proven Cow Families, Actual Performance, and Carcass Data
V8’s strategy involves a focus on visual appraisal, proven bloodlines, performance data, and carcass data. Since the ranch’s beginning in 1944, the breeding program has focused on exceptional cow families.
“The cow family — to us — is the most important thing,” says Jim Williams, who has managed the purebred V8 herd for more than 40 years.
“Some people linebreed to a bull, but we linebreed to cow families. You get more uniformity and more consistency. Even on our great herd sires, we think what makes them great is the cow family they came from.”
Today the V8 herd focuses on 9 major cow families, some of which can trace their roots back to the original herd in 1944.
Quality conformation and performance are equally important. As one of the longest continually operating Brahman herds in existence today, the ranch maintains more than 70 years of production records.
In the latest Brahman sire summary, the ranch had more than 70 bulls listed with 35 of those being trait leaders for performance and carcass merit.
The ranch also maintains production records from 1970 to present, allowing them to identify the most productive families. They collect actual birthweights, weaning weights, and yearling weights on all cattle as well as udder scores on cows, calf vigor and nursing scores.

Using Data to Dispel Brahman Misconceptions
The Brahman breed has often faced misconceptions addressing disposition and carcass quality. The ranch feels that the best tool in debunking these misconceptions is to provide actual data with full transparency to show that many of these past problems have been identified and corrected.
The ranch collected disposition scores on all of the cattle since 1971 using their own system, but adopted BIF guidelines for scoring in 2010. Any animal that scores 3 or higher is automatically culled.
In the 1990s, the ranch was an early adopter of Brahman carcass ultrasound research, DNA technology, and sent several loads through the TAMU Ranch to Rail Program to identify their top producing sires. In 2010, the ranch began participating in the American Brahman Breeders Association Carcass Evaluation Program to measure the carcass merit of purebred Brahman steers. Their findings have been phenomenal according to Cutrer.
“In the last four years V8 has fed the largest number of cattle in the ABBA Carcass Evaluation Program,” he states. “We have dominated the test. In the 2013 program V8 Ranch produced 9 of the top 10 high-indexing steers, including the #1 high-indexing steer. We also had the top five high-indexing sire groups.”
“We place a high emphasis on marbling, tenderness and muscling,” says Cutrer. “It’s pretty typical for our purebred Brahman steers to grade Choice, yield grade 2. “And every single calf we have scanned has had a REA/CWT ratio of 1.0 or greater.”
The ranch’s data is being used by ABBA to increase accuracy in Brahman carcass EPDs and develop new EPDs for disposition.
“V8 Ranch has always been an advocate of breed improvement,” says Chris Shivers, CEO of the ABBA. “They have participated in the Brahman Herd Improvement Records, Carcass Evaluation Program, the ABBA Performance Bull Test and have utilized the technologies of ultrasound and DNA.”
Shivers says their participation in this program has helped the ranch make vast improvements in the area of carcass improvement to better meet their customer’s needs.

Raising Cattle That Fit the Commercial Cattlemen’s Demands
With the majority of the ranch’s clients being commercial cattleman, Williams and Cutrer spend a lot of time visiting with their customers to provide the right type of cattle for the customer’s breeding program and environment. The first question they usually ask a prospective buyer is what type of cows they’ll be using the bull on.
When using Brahman bulls in a crossbreeding, cattleman achieve a big increase in weaning weights, yearling weights and fertility through hybrid vigor. However, you can also expect to see about a 10 percent increase in birth weights. Thus, the ranch feels collecting actual birth weights on every single calf born on the ranch is of extreme importance. If the customer has a British-base cow herd, the ranch recommends low birth weight bulls. If they are using the bulls on American type cattle, birth weight is of little concern.
“We simply will not sell a bull to go on a British cow herd with a birth weight over 80 pounds,” says Jim Williams. “We look at two factors in birthweights — actual birthweight and EPD. If a bull has a birthweight less than 80 pounds and a birthweight EPD of 2.5 or less, we can confidently recommend him for Angus or Hereford females. Our business is built through repeat business and we want to make sure our customers choose bulls that will work in their programs.”

Positioned for the Future
V8 Ranch cherishes it’s storied past and success in the beef industry, but they feel that the best is yet to come — both for their ranch and the Brahman breed, says Cutrer.
“For cattleman in the southern United States, there is no better cross than a Brahman F1,” he says. “When ranchers want to utilize these Brahman genetics in their programs, we want them to think of V8 Ranch as their first choice for quality Brahman cattle with the performance and carcass quality they demand. And, we want them to be confident they are doing business with people who will treat them right and stand behind our product.”
The goal for V8 Ranch is focused and clear: continue the ranching traditions that have lasted for more than a century with great service and great cattle. V8 Ranch hosts two production sales each year — an online bull sale in April and online female sale in September. Cattle are also available for sale private treaty year round. For more information visit www.v8ranch.com.