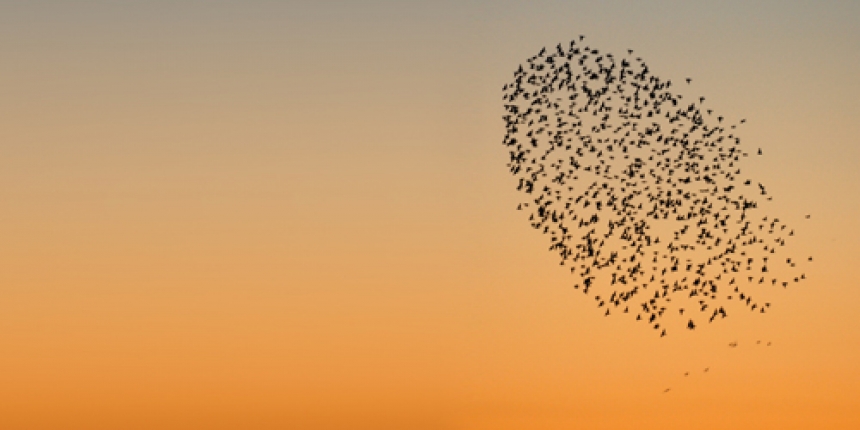 European starlings (Sturnus vulgaris) were first introduced to the United States in the late 1800s. It is believed that starlings were imported from Europe and released in New York City’s Central Park so that all birds mentioned in Shakespeare’s works would inhabit the new country.

Nearly one-third (i.e., 200 million) of the world’s starling population inhabits the North American continent. Starlings inhabiting the High Plains are not considered migratory and remain in the same general area throughout the year. However, starlings from northern climates can escape snow-covered feeding grounds by migrating up to a distance of over 900 miles. During much of the year, small, inconspicuous flocks of starlings feed on seeds, fruits, and insects. However, during winter months, large flocks of several hundred to 1 million starlings will share common feeding and roosting sites. These large flocks prefer to roost in coniferous trees, which provide protection from wind and other adverse weather conditions. An average distance of about 9.3 miles can exist between roost and feeding sites, with a range of 5 to 25 miles.

Feedlots  and cattle ranches have been associated with large populations of starlings during winter months. A starling weighing 85 g can consume over 2 pounds of feed in a 30-day period. Based on 1968 feed cost ($0.03/lb), 1,000 starlings would consume $84 worth of feed during the winter months. With today’s ration cost (~ $0.13/lb), this would equate to $364 worth of feed for 1,000 starlings during the winter months. The researchers of this study observed the birds arrived at the feedlot at approximately 8 AM and returned to their roost at 4 PM.

In Experiment 1, they used 5 different diets to see what the birds ate from the feedbunks. The bunks were set up so cattle did not disturb the birds’ consumption of feed.

Rations containing steam-flaked corn were somewhat more affected by starlings than the dry-rolled corn diets. The researched observed that urea and alfalfa hay were not preferred by starlings. They did consume some of the soybean meal. Distillers grains was 1/4 of one of the diets. It did not appear the starlings were consuming the distillers grains. Starlings did not appear to consume the feed pellets.

Starlings preferentially consume energy dense portions of the ration (i.e., starch), which ultimately leads to changes in physical and chemical composition of rations, thereby decreasing growth rate and feed efficiency of cattle. Severity of these changes is largely determined by the number of starlings present relative to size of the feedlot.

In Experiment 2 they evaluated the impact starlings had on cattle performance. Birds and cattle ate from the same feed bunks. In Experiment 2, the amount of feed delivered increased 36% for cattle that were fed traditional corn grain-based ration compared to cattle that were fed pellets during a period of severe starling infestation. Following seasonal dispersal of starlings in early March, feed deliveries of traditional meal-type ration decreased to pre-starling levels. Starlings consumed over 1,100 pounds of feed from troughs with a total value of $563 throughout a period of 47 days, increasing daily cost of production by approximately $0.92 per feedlot animal. Therefore if cattle are not performing as projected, bird issues are another factor to consider.