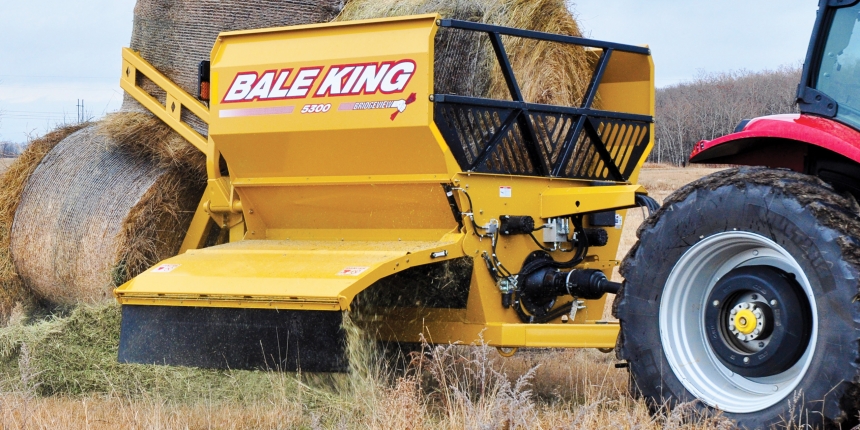 Thanks to technology innovations, today’s producers have a wealth of bale processing options to choose from.

Andy Robson, North American Sales Manager at Teagle, says that when it comes to today’s bale processors, market requirements and technology go hand in hand. Originally, the bale processor was a means to dispense dry material from a bale form. Now producers want to work with the full spectrum of materials—whether they have nutritional value for feed or marginal value for bedding with high and low moisture content or consistent particle size to eliminate sorting when processing for a ration.

“In cab controls via Bluetooth, Teagle allows you to change and modify material lengths on the go,” Robson says. Teagle is a third-generation family business, based in England and they have been involved in the agricultural equipment business for nearly 80 years. The company’s focus and specialization for the past 35 years has been on bale processing equipment—processing cornstalks, silage, hay, straw, distributing windrows, bunk feeding, creating consistent-sized material for TMR rations, blowing bedding into barns, calf hutches or preprocessed material into commodity buildings.

According to Ethen Wentz, president at Fair Manufacturing, as tractors and wheel loaders have evolved to have higher horsepower and more hydraulic capability, it has opened the door for those within the bale processing industry to create significantly higher performing models than have been used in the past.

Fair Manufacturing produces three distinct styles of bale processors to suit almost all applications from bedding, feeding, grinding, or land reclamation. The company’s side discharge models are ideal for producers that want to easily switch from bedding to feeding. The top discharge model is a popular solution for producers looking to bed over the top of gates and panels or from the outside of a barn.

“We not only have a range of models, the models themselves are individually adaptable to fit the customer’s operation,” Rouault says. “Customers are drawn to technology or improvements that have a focus on ruminant nutrition and health, which in turn increases their productivity.”

Highline has been producing Bale Pro’s since the 1990s so they have been in the marketplace for quite a number of years, and the company’s customers value the reliability and durability, not only in the Bale Pro line, but also in the round Bale Movers, the FaStack large square stacker and Highline’s rock pickers.

Iowa farming duo, Bruce and Connie Goddard designed and created the Bale Storm Bale Processor, which features a unique design in that it is an attachment for a tractor. This allows small and mid-size farmers to easily maneuver in and out of smaller spaces. The Bale Storm Bale Processor features a three-point reach attachment which allows the operator to see where they are bedding because the large bale is in the back of the tractor.

Finding the Right Fit
So what are some key attributes of bale processors that today’s producers are looking for?

As Wentz explains, with input costs continuing to climb, today’s producers are always looking for ways to increase performance and efficiency.

“Time continues to be one of their biggest operating costs,” Wentz says. “Implementing equipment or systems that cuts time out of necessary processes enables them to maintain profitability in such competitive markets.”

“Just like most industries, the technology is changing very quickly, along with completely new options that were not available ten years ago,” Wentz says. “Producers should research and compare multiple models before making a selection.” For example, Fair Manufacturing has several producers who have used PTO driven processors for years that are transitioning to loader mounted processors for their speed and versatility.

One of the most common mistakes made is purchasing a piece of equipment with little support. As Wentz points out, breakdowns are expensive but waiting several weeks for parts or service can be catastrophic for producers. Choosing a product that has a supportive dealer network but also one that offers factory direct technical support is a huge value addition.

As Rouault explains, producers look for a bale processor to reduce their percentage of waste in their feeding operations. Some look for the options of the Feed Chopper to reduce the particle size even further without the need to own or hire a tub grinder. Other producers will look for the ability to add a protein or energy ration to a lesser quality forage. But for most producers, having a quality and well-built product that that offers multiple functions that they are able to share the cost of investment across various practices of their operation is paramount.

Bob Cochran, general manager for Highline Manufacturing says the most important part of selecting a processor is identifying the pain points or missing opportunities in your current operation, then selecting a bale processor to address those items.

“Older model years had options that we now include in our base price due to customer feedback, due to the changing industry and competition it is important to consider this when selecting or comparing bale processors,” Cochran says.

Robson further explains that today’s producers are looking for flexibility to handle materials with ease, simple adjustments, longevity, and reliability. “Due to certain products being very abrasive i.e. corn stalks and bean stubble both having a high dirt content the use or abrasive resistant steel in high contact areas,” Robson says.

That’s why Robson says it’s important for producers to understand their building layout—namely how far does the material need to be blown from the machine, as well as what finished material length are you requiring, bale size and shape, how will you load the bales, and in the future will you change to a round or square format.

What’s Ahead
As technology improvements continue to be made within the bale processor industry, producers need to pay attention to advancements that may impact their efficiency and productivity.

For example, Teagle offers operator features that include Bluetooth Electric Controls for swivel discharge chutes, material lengths, bed speeds, automated lubrication systems, rear tailgates or loading arms which allow operator efficiency, all while maneuvering the direction of the product flow from the comfort of an air-conditioned cab.

In addition, as Robson explains some of the newest bale processors can reduce the size of the hay to lengths of two inches, if desired, which makes coarser feeds more palatable and digestible. For bedding, producers can change to longer processed lengths with the push of a button. “This flexibility gives producers the ability to process and mix their own feed rations,” Robson says.

One of the biggest changes for bale processors is the continued advancement of loader attachments. According to Wentz, wheel loaders and telehandlers are becoming multifunctional machines that allow producers to become more efficient with the variety of attachment options.

“With the advancement in hydraulic capabilities, Fair Manufacturing has developed the first and only high performance hydraulic bale processor that has three bale capacity and is capable of bedding up to 60 to 70 feet,” Wentz says.  Fair Manufacturing will also be releasing the latest version of its popular 7830-TD top discharge bale processor this fall. This model will answer the call from producers to continue to increase performance and speed capabilities while maintaining the durability needed from today’s larger tractors.

The team at Highline says the most recent major technological advancement in bale processors is the ability to process two bales of different types simultaneously with the Highline CFR1251. It is the only processor on the market with this capability which allows for blending of two forages, along with addition of grain, to the feed ration which can significantly reduce overall feed costs. Like other bale processors it can be used in both feeding and bedding applications.

In the future, Teagle will be offering an optional dust suppression kit (atomized water) to the discharge point, five nozzle system with automatic on/off control from the tractor seat.