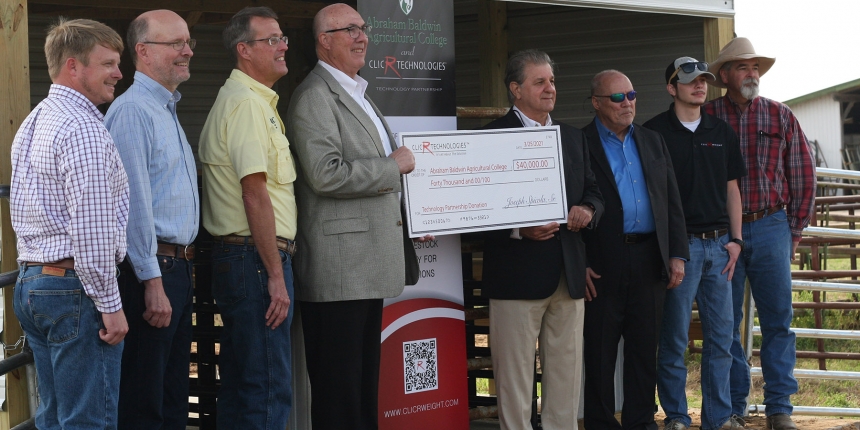 The Future of Weighing Livestock is Here and it doesn’t Include Scales.

ClicRtechnologies, Abraham Baldwin Agricultural College (ABAC), and American Cattlemen Magazine have partnered to share an in-depth exploration of how the ClicRweight Bovine Solution revolutionizes the way ranches operate. It can be hard for some people to let go of the tried and true methods of weighing cattle with livestock scales, however there is no doubt this scale-less system will increase profits, reduce stress on animals and empower any rancher with more frequent information about the weight of their animals.

Joseph Spicola Sr., inventor and CEO of ClicRtechnologies, often says, “Embrace technology or get left behind.” He has been involved with different aspects of ranching since the 1990’s when he started raising cattle in Alabama to later being part of a team of investors who built a 3,000 acre stocker operation in Texas. Spicola Sr. recalled, “The process of getting the cattle to the scales bothered me. I knew there was a better way, but I couldn’t find a solution anywhere out there.” So he set off to make it.

He recalls “There were many obstacles and even times I thought maybe it can’t be done but I relied on my faith to guide me to the solution. Every time I prayed, everything just kept working out.” After finding the right people to make it happen, Spicola Sr. and his team brought his vision to life. During the development of the ClicRweight Bovine Solution, Spicola Sr. received calls to create ClicRweight Solutions for hogs and alligators.

Spicola Sr. understands people resist technology because it can be difficult to make the switch from traditional livestock scales for a person who isn’t comfortable using computers or relying on technology. He kept this in mind to assure his equipment would be low maintenance, durable, reliable and accurate before he brought it to market. With his team, Spicola Sr. developed a database that is complex in its ability to collect and sort, but easy to use, even for those who aren’t comfortable with computers.

Imagine never having to round up your cattle and run them through the scales again while getting more weights, more often. ClicRweight Bovine Solution replaces the need for traditional gravity scales and is discreetly built into your cattle watering system. The ClicRweight system works by reading an RFID chip in the cattle’s ear as it walks up to get a drink at the water trough. A 3D camera positioned above the stall takes several pictures as the cattle are drinking and the 3D photos are uploaded into a data system which calculates the weight of each animal and provides a variety of ways to sort data. The ClicRweight Bovine Solution dashboard can be accessed from any electronic device that is connected to the internet while weights are uploaded in real time, but this is only the beginning of what the ClicRweight Bovine Solution is capable of.

A Partnership That Advances Technology at ABAC and Details How This New Technology Revolutionizes Ranching
Abraham Baldwin Agricultural College provided a wonderful educational opportunity where Joseph Spicola Jr. thrived in his studies as he earned a degree in Animal Science and Livestock Health. Spicola Sr. had suggested his son attend ABAC and was proud of him when he saw the enthusiasm and success his son was having there. Dr. MaryEllen Hicks, Professor of Animal Science, and her husband, Doug, Beef Unit Manager, became mentors and gave inspiration to Spicola Jr. Spicola Sr. and his son have kept in touch with Dr. and Mr. Hicks throughout the years. ABAC earned a special place in the hearts of the Spicolas. It didn’t take Spicola Sr. long to figure out where he would like his support to go.

At a presentation on March 25, 2021, Spicola Sr. provided ABAC’s School of Agriculture and Natural Resources with a donation valuing $40,000, including three ClicRweight Bovine Solutions for their cattle operations. In return, ABAC offered to provide access to insights and information the students and professors have while using this equipment. Moreover, American Cattlemen Magazine offered to publish the insights of the professors and students to help people better understand the ClicRweight system.  “We believe ABAC and American Cattlemen Magazine will give ranchers and small family farms an opportunity to see this revolutionary technology firsthand” said Spicola about the partnership. Dr. Mark J. Kistler, Dean of the School of Agriculture and Natural Resources at ABAC, says, “We are excited about our partnership with ClicRtechnologies. The ClicRweight Bovine Solution system will provide valuable data for the management and operation of our Beef Unit. More importantly, it will be utilized by many of our academic programs not only Animal Science and Livestock Production, but also Agribusiness and Agricultural Technology and Systems Management. Being able to have our students see and use the latest in technology will help them have the knowledge and skills they need for future employment.”

Articles will appear in consecutive issues of American Cattlemen Magazine and will include an in-depth look into how the ClicRweight system is utilized. The next four issues of American Cattlemen Magazine will examine; process of weighing and maintaining systems, special features (programmable spraying, daily photos, daily weights), nutrition and health, and, saving money (turn the ranch faster, mark animals when they are at shipping weight. The final article will be a summary of conclusions reflecting six months of experience the professors and students have gained and what insights came with it. We hope you will find value in this inside look at the latest technology to emerge in the livestock industry. Follow this series on social media and in future issues of this magazine.