Giving Thanks for Holly - Moooove over Fluffy Cow. Say Hi to Miss Fuzzy!!! 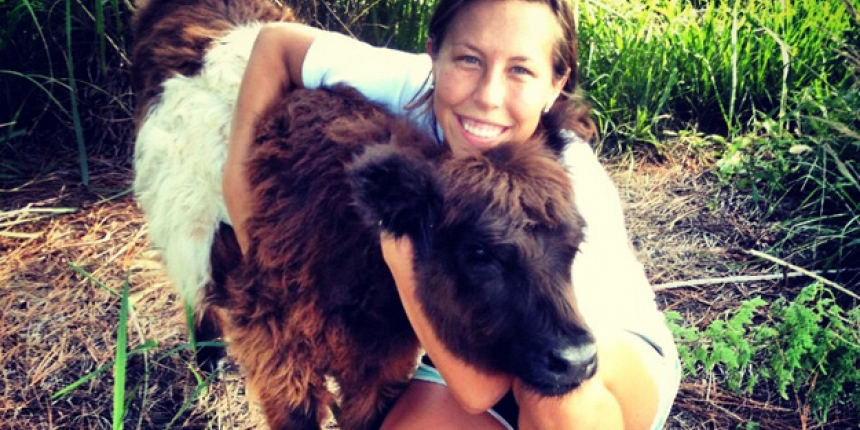 Whitehall Farms is located in Santa Rosa County in the Northwest Florida town of Milton.  The farm namesake is derived from an old confederate plantation in Maryland. The farm was established in the early 1990’s on 150 acres with approximately twelve cows and one bull, all of the Belted Galloway breed.

The farmhands and owners are John, Laura, Rachael and Tyler Lee.  Buddy and Barney (lab/sharpie mix) are the two loyal companion dogs.  Holly, “winner of American Cattlemen’s cute calf contest”, was born on Thanksgiving 2011.  She was found abandoned in the pasture and was raised on a bottle by her human “family”. She quickly developed “imprinting behavior” and became human like- occupying the yard, garage, porch, and yes sometimes running into the house behind Buddy and Barney!  She often walked up the steps of the front porch and stared into the windows as if asking why she wasn’t inside with “her family”.  She quickly gained a privileged status among her fellow bovines.  The Beltie breed is of European descent.  Known for their lean cardio protective beef, they are very docile animals who forge well in all types of terrain.  They are very protective of their calves and love water and plenty of shade.

Rachael, a student at Troy University became Holly’s pseudo beltie mother/caretaker.  She was assisted by her brother Tyler, a student at The University of Alabama. Their mother Laura, became the substitute nanny when Rachael and Tyler’s academic duties necessitated a leave of absence.  John, their father, and a local physician, provides support and guidance for the farm operations.

Now with over 150 head of cattle, Whitehall Farms is becoming a major beef cattle producer in Santa Rosa County.  Fortunately for Holly, her sex and notoriety, will qualify her for an exemption for that delicacy on the evening table!  The Lee family would like to thank all their family and friends for all their hard work in helping Holly win American Cattlemen’s cute calf contest.  We welcome inquiries at
Whitehallfarms@bellsouth.net.

What is a
Belted Galloway?

The unique appearance of Belted Galloway cattle inspires many questions about their origins. With black, red or dun color sandwiched about a white middle, they are familiarly known as ‘Belties’ among breeders of the animals. Though references to ‘sheeted’ cattle occur in literature and art as early as the 11th Century, the Belted Galloway’s first recorded history indicates that they developed during the 16th Century in the former Galloway district of Scotland, a rugged and hilly seacoast region where hardiness was necessary for survival.

This range-bred background is why Galloways, unsurpassed in foraging ability, are capable of ranging many miles each day for grass and water and will thrive under conditions that would be disastrous to other breeds. When properly managed, Belties have a pleasant and agreeable temperament and are quiet, docile and easily handled. Like other Galloways, Belties do not develop much fat under their hides; instead they have a double coat of hair consisting of a dense, soft, short undercoat and a long, shaggy overcoat, which is usually cast in hot weather. This double coat provides excellent protection in cold, wet, windy weather. In contrast, most other British beef breeds put on a thicker layer of uneconomical fat under their hides to provide the necessary insulation for protection against severe weather conditions.

Disease resistance runs high in the breed as a result of having been bred for centuries under ‘survival of the fittest’ type environments. In addition to this resistance to diseases, they have a ‘will to live’ that is superior to most, if not all, other breeds of cattle. Congenital problems such as dwarfism are unknown to Belted and other Galloways.

Beltie cows produce a sufficient amount of rich milk to raise a husky calf, which at 205 days will frequently wean at half the dam’s weight. Galloways and their crosses, when properly finished, will dress out at 60 to 62% of live weight. Thus, these unique animals with many virtues seldom recognized and as yet unexploited should be of interest to both breeders and commercial operators.

Increased calf mortality and illness is blamed on...

The favorite time of the year for cow-calf...