Grazing Management Critical in a Drought 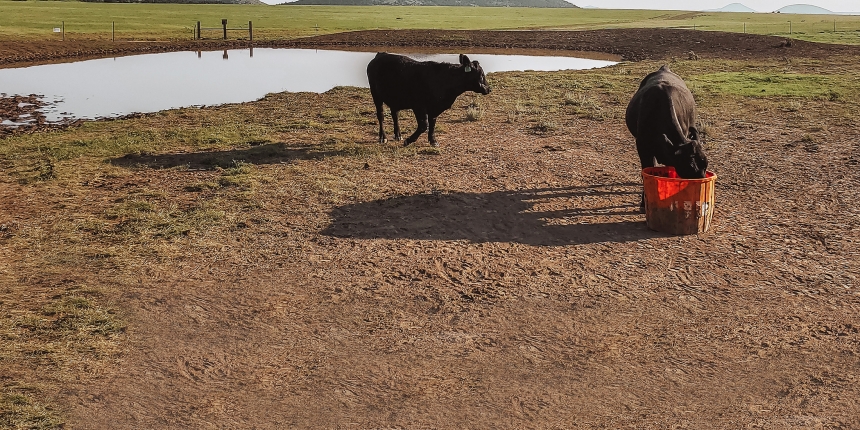 Grazing Management Critical in a Drought.

Measuring what you manage will set you up for long-term success.

"I’ve never known a man to go broke being understocked. Now, you may leave a little money on the table, but you’re not going to go broke.”

That pearl of wisdom from his first range management professor is one of many that Dr. Tim Steffens has collected and often passes along to students, ranchers and anyone else who will take heed.

Why? “In a drought, that’s the thing you’ve got to be really scared of,” Steffens declares. He serves as an associate professor of rangeland resource management at West Texas A&M University in Canyon, Texas, and as a Texas AgriLife Extension Service range management specialist.

However, if you have a grazing and drought plan, and a good ranch inventory, you can weather what the dry years throw at you and still stay on the land, says Dr. Hector Menendez, assistant professor and South Dakota State University Extension range management specialist.

Menendez invokes the old saw that you can’t manage what you don’t measure. “And so it’s really critical in terms of grazing management to have a ranch inventory. And by that, I mean number of cows, assets, available grass (and other forage), number of pastures, and days available for grazing,” he says. “Then that’s the first place to stop and either look at that information or quickly acquire what (information) can be acquired so that we can make objective decisions.”

Of course, not every rancher is dealing with drought. If that’s your situation it’s still important to have a current ranch inventory and drought management plan. And now’s the time to do that if you haven’t already got those in place.

In times of drought, having those at your fingertips is critical. If there’s adequate forage for cows and calves, you can supplement to extend the grazing season, Menendez says. By determining the number of days left to graze any particular pasture, you can pull the cattle before harming the resource.

There are several often-used ways to do that. You can cull cows to reduce stocking rate and supplement to extend the forage; you can find additional pastures with adequate forage and move the pairs; you can wean early; and/or you can drylot the cattle.

Once you’ve determined the amount of available forage and number of grazing days left in a pasture, then you look at your drought plan for the pre-determined trigger dates. Those are set by the rainfall you’ve been blessed with and available soil moisture.

These trigger dates tell you critical points in the year when decisions need to be made, Steffens says. Those decisions depend on how much forge you have at that time and when you can reasonably expect growth again.

“So at that time, you need to get forage demand in line with forage supply—you can carry a lot of cattle for a very short time or a few cattle for a long time with the same forage supply,” Steffens says. “Think of like a barn full of hay.”

The rainfall, of course, determines the amount of forage growth. Thus, drought is determined not only by the amount of precipitation you do or don’t get, but when you get it, how much soaks in versus how much runs off, and how much evaporates. “If you look at the entire Great Plains, basically, your most reliable rainfall, and the rainfall that’s coming during times when the temperatures are right to grow grass efficiently, is April, May, June by and large,” Steffens says.

“If you don’t get the growth then, even if you get rainfall after that, that rainfall isn’t going to grow as much grass as the rainfall would have before.”

Menendez agrees. “Once you hit those April-May dates where you need to have that rain to get those rangeland forages in production, the likelihood of having additional forage is really low. The statistical probability, over a 40-year weather average, is really low for them to have the time that plants can grow and recover.”

That’s why keeping some cover on the ground helps the precipitation soak in instead of running off, Steffens says, which helps set the plants up for success the next year. That’s especially important if you’re feeding cows on pasture.

“They’re not just going to eat the hay. They’re going to go out and nibble around on whatever starts to grow,” Steffens says. “Well, if that grass just starts to get its head up and something comes along and bites if off, it sets it back even worse. You end up destroying the resource, losing your equity, and you’re not making any money, either. So keeping those things in mind keeps you from getting into wrecks.”

Managing Equity Equally Important
Menendez and Steffens agree that managing your equity is just as important as managing your grazing, especially in a drought. That means work the spreadsheets hard, they say. That’s because of another old saw that maintains that you can’t feed your way out of a drought.

“When you start getting into a drought, you need to worry about managing water and the plants, and you do that with cover,” Steffens says. “You’ve got to manage equity, and you do that by not spending a bunch of extra money. Then, you manage how well the livestock do by getting your carrying capacity in line with the other two.”

Steffens says, if you look at the cost of hay and diesel, you can’t afford to haul hay to your cattle. “You’re better off to haul the cattle to somewhere that has grass or get your money back out of them. Take the cash, have the equity, and preserve the resource.”

As you’re considering all your options, be objective, Menendez says. “Making those objective, hard decisions based on numbers and measurements is really critical, having been there myself with a cattle herd in Texas and having to make those decisions,” he says. “But by being really objective about it, it will set the rancher up for long-term success.”