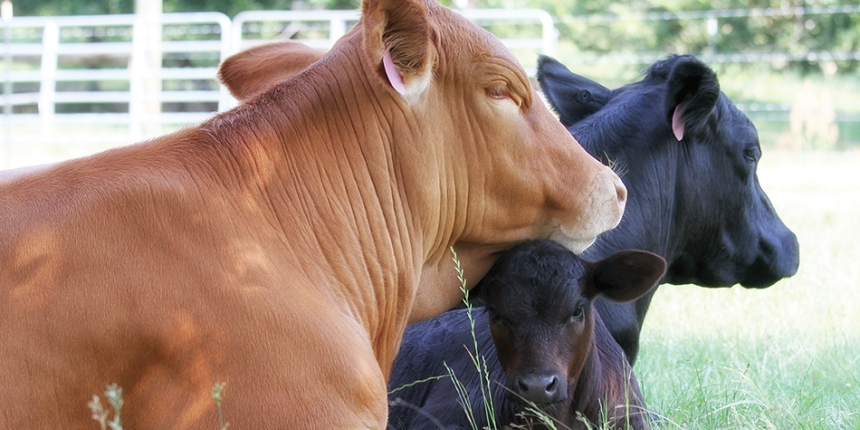 Heat Stress is a Bigger Deal Than you Think.

In the hot summer months, cattlemen face one of nature’s harshest battle against the animal kingdom. Hyperthermia, or heat stress, is the scourge of livestock especially in regions that are especially hot and/or humid.

All kinds of environmental factors, not the least of which is heat stress, take their heavy toll on the beef industry. Some estimates are as high as costing the industry one billion dollars in losses each year. Hot weather, coupled with inadequate hydration and ineffective means of cooling can be detrimental to individual animals, herds, and production. Besides these, heat stress is also an enemy of sustainability, sapping up valuable resource while making animals less efficient. And not the least of all, heat stress is an animal welfare concern.
What creates stress for individual animals will vary based on breed, genetics, management and environment. But it may not take as much as you think for there to be an impact, perhaps larger than you thought.

Beware the pasture
Endophyte-infected fescue, sometimes called “hot fescue”, is well-known to increase body temperature and further induce heat stress more quickly or severely. This is due to the ergot alkaloids interfering with an animal’s blood flow thereby limiting heat abatement through evaporative cooling (which is sweat and evaporation) – a bovine’s key weapon against the heat.
In severe cases this can be as much as a 50% blood reduction to certain areas of skin according to one study. If infected fescue is a common issue in your area, a lot of experts recommend playing it safe and only have cattle graze pastures known to be clean. An alternative is having animals rotated between infected and clean pastures, especially during the hotter months. At the very least, the seedheads of fescue pastures can be cut down. Endophyte concentrations are highest in the seedheads, so by mowing this can reduce the risk and at least minimize the amount of endophyte consumed.
Access to fresh clean water is pivotal to success in the summer months for cattle of all ages. It can be more challenging to accommodate this on large acreage be it fenced pasture or open rangeland. On an average day, it will take 1.2 gallons of water per 100 lbs. of bodyweight, increased according to temperature. Not only does adequate hydration help with heat abatement, water is essential for the function of all cells in the body, accounting for 60% of an animal’s total weight and 70-90% of the body’s cells. As cattle increase their water intake so are they increasing their urine output which can risk losing electrolytes in the body, including magnesium, copper and sodium among other things. This can be remedied by providing supplementary minerals.
If you rely on natural water sources to keep your animals hydrated, providing artificial shade may help preserve them a little longer. Data suggests cattle will prefer to seek out shade before cooling themselves in water, and one of the fastest ways to contaminate or degrade a natural water source is from animals immersing themselves. The impact on how much shade helps improve efficiency doesn’t seem to be significant, at least not for pastured animals. In fact, it seems shade will encourage animals to graze less. But depending on your breed, animals’ heat tolerance and climate, shade opportunity will at least positively impact overall animal welfare.

Impact on breeding
One of the less obvious place was heat harms cattle is on reproduction. While this is more concerning for dairies who breed year-round, beef producers in warm climates may still run into similar issues. In fact, scientific literature from as far back as 1980 noted pregnancy and successful calving rates could be as low as 10-25% for animals bred July to September.
The biggest culprit is increased body temperature, which creates an unfavorable, less hospitable environment for a conceptus to survive. A study at Ohio State in 1986 found that animals exposed to 97 degrees F and 98 degrees F days and 91 degrees F nights were much less likely to maintain a pregnancy through the first week compared to their moderate temperature counterparts in the control group at 71 degrees F days and nights. Eigty-three percent of the control group remained pregnant compared to 64% (moderately heat stressed) and 50% (severely heat stressed).
When paired with infected fescue, the impact can be further compounded. Studies have looked at the ovarian health of heifers grazing fescue and suffering increased heat stress, creating impaired follicular development and function which contributed to poorer conception rates. These have also been linked to decreased prolactin production, which hinders milk output for nursing calves.
For operations that utilize A.I., temperature is even more critical. Not only does it make semen handling more delicate, it makes conception significantly more difficult. Dairy research has found optimal temperature for A.I. to be between 50- and 70-degrees F. If climate control is not possible, be sure to provide shade for insemination procedures and have ample hydration. With live cover animals, bulls can also lose fertility due to increased body heat. They will also lose some libido and be less active. Again, providing shade and adequate water are among the best alternatives.

Down to the genetics
Heat stress can be particularly frustrating because it seems there is so little we can do, especially for animals living on open rangeland. Or, thanks to genetics and new science, maybe there is.
One of the biggest issues with overheated cattle is their lethargic state. When temperatures increase feed intake and rate of gain decrease, along with milk output. This can happen to herds that stay even well hydrated, it’s when they get so hot, they prefer to stand in water or searching for shade that their efficiency comes to a screeching halt. But animals who have been specifically bred for these climates, or just won a genetic lottery, seem to be impacted significantly less in terms of production and efficiency.
For these reasons, heat resistance is at the forefront of genetic research in beef animals. One thing being looked at is the way animals thermoregulate and how that might be passed down in progeny. Of interest right now in EPDs is the “slick gene” or an animal’s ability to shed out their winter coat in a timely manner and keep a lighter summer coat for longer, especially in continental breeds.
Universities in the southern states have been seriously studying the economic impact of dams and when they completed shedding. One study found a 24-pound weaning weight difference in Angus calves born to cows who shed by May compared to those who shed after. Hair shedding can also be delayed by other external factors as well, including fescue toxicity and certain deficiencies.
Hair coats and other thermoregulation characteristics seem to be moderately heritable. But even with this in mind for mating selection, it still requires some time and even generations to fully develop. Another thing is being examined is in the science of gene editing. Scientists have the capability to insert the heat resistant traits from certain bos indicus breeds to continental breeds. The same technology has been used to create polled animals as well. While there are still a ways to go in terms of regulating this new science in food production and delivering it to the industry, the advancements are exciting for sure. In the meantime, take what practical steps you can to help your animals make the most of the hot summer months.