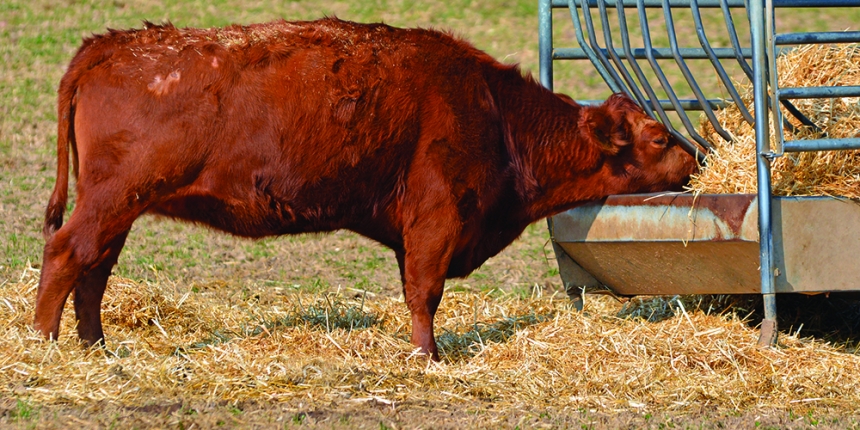 Importance of Feed Testing to Make Sure Nutrient Requirements are Met.

Cattle on summer pasture usually have adequate nutrients unless the forages are very dry or mature, but winter forages often need to be supplemented with protein or minerals.  The only way to determine the nutrient quality and levels of various nutrients of forage is to have it analyzed.

Mary Drewnoski, Beef Systems Specialist, University of Nebraska-Lincoln, says one of the biggest benefits of feed testing is to determine protein levels—especially if hay got overly mature before it could be cut, or rained on before it could be baled.  “It’s not expensive to get a hay test, and it can be helpful. Without it, you may be supplementing when you don’t need to, or not supplementing when you should,” she says.

“You just need to use a core sampler of some sort, to sample various bales from a certain field.  Many people just take a grab sample, but it only represents about one square foot in that field.  There is so much variability in any field that one grab sample won’t be representative.  Take time to borrow a core sampler from your extension agent.  The labs are very accurate in their ability to test a feed, but that test is only as good as the samples they get,” says Drewnoski.

You want to sample that particular lot or field of hay uniformly and not just pull core samples off the bales you can get to the easiest.  You need to take about 20 core samples throughout that batch of hay to get a good representative sample.

“It’s important to understand that there are several kinds of tests.  Many labs use NIR (near-infrared reflectance) tests because it’s cheaper.  These are appropriate when testing common feedstuffs like alfalfa, bromegrass, meadow hay or native range hay.  With some of the annual forages, however, NIR tests may not be as accurate.  The equation developed to predict values was not calibrated for those forages.  Spending the extra money to get analyses with wet chemistry for those types of forages would probably be worth it,” she explains.  If you are going to take the time to sample and test your feeds, you want them to be accurate.

“Talk to the lab you are sending samples to and they will give you the best advice on what to ask for because they know the equations they are using.  They are a great resource if you have questions.  They won’t be able to balance a ration for you, but will be able to tell you how comfortable they are with their ability to predict the TDN (total digestible nutrients) from their various methodologies.  Protein is always the best number you get from a feed test, and sometimes we wonder about the TDN,” she says.

Some regions are short on certain minerals and you could ask to have some of those levels checked as well.  “In the 1990’s a nationwide survey of forage samples showed that most of them—across the country--were deficient in copper and zinc.  Selenium can be even more variable because certain areas are deficient and some have too much,” she explains.

Some soils contain molybdenum, an element that ties up copper and makes it unavailable to the body, so even if there is sufficient copper it may important to check the molybdenum levels as well.  In general, the trace minerals in feeds won’t change as much from year to year as do the protein and energy levels, so once you know what the various mineral levels are in your feeds you may not need to check them every time.

“Phosphorus and calcium can change a bit, however, since those can be tied to the maturity of the plants—and to the protein and energy levels.  We see lower phosphorus levels in a lower-quality forage, for instance,” says Drewnoski.

If you are uncertain about how to go about testing forages or how to interpret the tests, you can get help from several sources.  “Here in Nebraska we have 13 Extension Educators across the state who can help, and several specialists like myself who are happy to answer questions if people give us a call,” she says.

It is difficult to create a good ration for beef cattle without a forage analysis because nutrient values can vary so much, even within the same type of plants.  Brome grass hay for instance could be 6% protein or it could be as high as 12% depending on stage of maturity, weather conditions while growing and during harvest.  You can save yourself a lot of money just by spending a little bit of money for testing.

Most years, it is very important to know the nitrate levels in certain forages, especially in arid regions.  “Nitrate problems are generally found in drought situations in combination with high soil levels (such as a lot of nitrogen fertilizer, and then not enough growth of plants to process and use it in a normal way).  In a wet year there is more growth, and also more leaching of nitrogen out of the soil profile, so there are generally not as many nitrate problems in forages.  On a wet year, however, we may see a lot of protein and energy deficiencies because the plants were more mature before the weather was dry enough for hay harvest,” she explains.

Warren Rusche, SDSU Extension Beef Feedlot Management Associate, says weather conditions this past year in some areas made it more difficult for folks trying to put up hay or harvest crops.  “One of the things we are concerned about is people trying to rely on book values in terms of nutrient content.  Underfeeding is expensive (resulting in poor cattle performance) and over-feeding is expensive, so you need to know what the nutrient values actually are,” he says.

“The things we generally look at most closely include moisture content, percent dry matter, crude protein, fiber levels, and associated energy, TDN and energy values derived from fiber.  These values will tell us whether the feed will be adequate to meet our cows’ needs or if we have some feeds that could be blended together to meet those needs, or whether we need to bring in some outside supplement,” he explains.

If a person is relying on winter pasture there is an energy value created by that forage when it is digested (roughage is broken down in the rumen to create energy) but it takes a certain amount of protein to feed the “gut bugs” that ferment and break down the fiber.  Without adequate protein, a cow can’t eat enough low-quality, mature forage to meet her needs, and she loses weight.

“The same thing is true if we are feeding grass hay; we need to know the protein level.  If it’s 9 to 9.5% protein, we won’t need any additional supplement, but if it’s only 7% protein that’s a different story.  The rule of thumb is that cattle need forage that is at least 8% protein.  If it’s above that, it’s good forage, and if it’s below 8% we usually need to supplement with protein in order to see improved digestibility and increased intake.”

You want to make sure cattle are eating enough, especially in cold weather.  “If they don’t eat enough, and the forage is not very digestible, then we’ve created an energy deficit in those pregnant cows, and set ourselves up for poorer calf health, poor colostrum quality, and poor rebreeding the next year, and smaller calf check—so we really didn’t save money by not purchasing protein,” says Rusche.  An investment in protein supplement when it’s needed will always pay off, but you don’t know if you need it unless you test your feeds.

“Once you sample the feeds and know what you have, you can use those results to come up with a feeding strategy.  You can identify your best hay, and save it for later in the winter when you get closer to calving, or post-calving when cows are lactating.  The hay that’s not so great could be fed to a group of dry cows in mid-gestation.  It might be good enough, or it might work fine with just a little supplement.  Some folks can grind hay and mix it—and this gives more flexibility in creating an adequate ration.  Knowing what you have will enable you to come up with a diet that costs less money and still accomplishes what you need to do from a performance standpoint,” he explains.

Test Methods
Dr. Rick Rasby (University of Nebraska, Lincoln) says nutrient analyses in a lab are commonly are done by using chemical reactions or extracting important compounds and determining their amount in the feed.  Some labs also use near-infrared reflectance (NIR) spectroscopy.  This is a rapid, reliable, low-cost, computerized method to determine nutrient content.

“This test uses near-infrared light rather than chemicals to identify important compounds and measure their amount in a sample.  Feeds can be analyzed in less than 15 minutes using NIR, compared to hours or days for chemical methods,” explains Rasby.

“When sending a sample to be tested using NIR, it is important to identify/label the type of feed/forage being submitted so the lab can make use the correct procedures and feed library. This NIR method will not accurately evaluate a full mineral profile of a sample but does seem to fairly accurately determine calcium (Ca) and phosphorus (P) levels,” he explains.

NIR does not do an adequate job of measuring energy or TDN (total digestible nutrients) content of distillers’ grains (feed byproducts from the ethanol industry).  “In an NIR analysis, TDN is estimated using acid detergent fiber (ADF), which measures cell wall content of a feed.  Distillers’ grains are high in fat; therefore, NIR will underestimate their energy content.  NIR will however adequately measure moisture, percent crude protein (CP), calcium and phosphorus in distillers’ grains,” says Rasby.