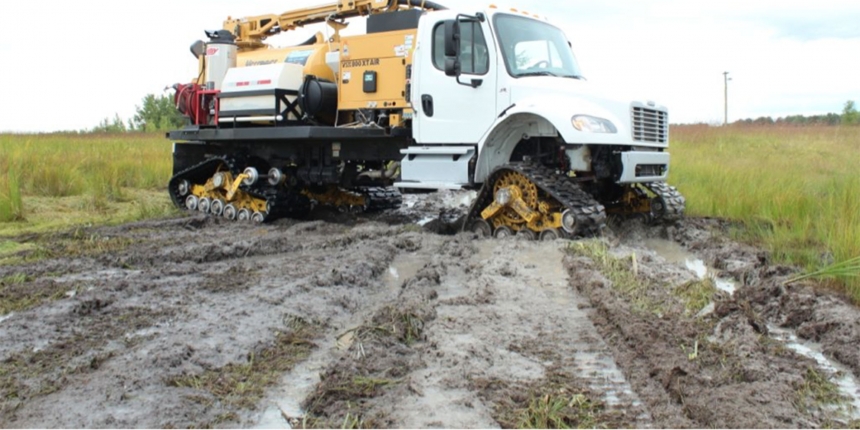 It’s no secret that replacement heifers are some of the most valuable animals in your herd; however, value goes hand in hand with vulnerability. With recent record-high costs to develop replacement females, it may be time to consider a refresh 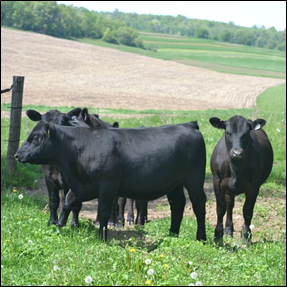 on your replacement heifer program.
“Heifer calves retained in 2014 and 2015 came at the highest cost of development in history with some estimates at more than $2,200 invested through preg-check,” says N.T. Cosby, Ph.D. and cattle nutritionist with Purina Animal Nutrition. “With cattle markets projected to decline over the next few years, it’s especially important for you to recoup value on replacement heifers.”
Here are three quick refreshers for your replacement heifer program:
1. Select older heifers
“We need to be identifying fertile, easy-fleshing females that will get bred early the first time and every time after,” says Cosby. “The ideal replacement would remain in the herd for at least seven to eight years as a profitable cow.”
Older heifers are typically from cows that calved early in the breeding season, which can imply that those heifers are more fertile. Like their dams, older heifers have a better chance of being bred early.
“A challenge can arise if you don’t have complete calving records. Without them, we often tend to select heifers that are bigger, not necessarily older. That results in a set of replacement heifers that will be larger in mature size than desired,” Cosby cautions.
If large heifers are selected consistently as replacements, you may end up with a set of cows that are too big for their environment. Also, larger cows can require more supplemental feed to breed back promptly and raise their calves.
2. Target 55 to 65 percent mature weight for breeding
“Once you have selected heifers for development, the next target is to reach 55 to 56 percent of their mature weight at breeding time,” says Cosby. “Depending on management, environment and selection pressure applied, heifers may fall on the low or high end of the range, but anywhere in the range is desirable for first breeding at 14 or 15 months of age.”
You may sacrifice conception rates and longevity of your herd if heifers are lower than 55 percent of mature weight at breeding.
“To fall within the desired weight range heifers will need to grow at a rate of 1.25 to 1.5 pounds per day from the time of weaning until first breeding,” says Cosby. “A high-energy feed that uses intake control properties can work with your forages to provide a predictable intake that delivers targeted gains. We also recommend having a quality mineral available at all times.”
3. Take reproductive tract scores
To identify highly fertile females, Cosby recommends working with a veterinarian to score reproductive tracts 45 days before breeding.
“Before you invest more resources into a heifer, it can be helpful to score reproductive tracts and set hard criteria for culling,” says Cosby. “Heifers that score below 3 on the 1 (immature or infertile) to 5 (cycling) scoring scale could be culled as potential replacements before first breeding. Heifers that score a 4 or 5 are ideal.”
Research has demonstrated that reproductive tract scoring is an effective method for evaluating heifers that reach puberty early. When scored between 12 and 14 months of age, heifers with low reproductive scores (1 and 2) have shown poor reproductive performance.
Reproductive tract scoring can also identify freemartins that may have slipped through the cracks.
The period between heifer selection and getting a heifer rebred after her first calf is crucial. It’s a time frame that can make or break a replacement female, resulting in either a huge economic loss or a productive, profitable cow.
“Selecting older heifers and applying selection pressure for fertility in the first year can pay dividends for the next several years,” concludes Cosby. “Developing fertile, early calving heifers is a goal that will deliver value in a cow herd during any economic situation.”
The Purina® All Seasons™ Cattle Nutrition Program is designed to support more heifers bred in the first 60 days post-calving. Talk to your local Purina representative to learn more, or visit ProofPays.com to start your feeding trial.

Preconditioning Impacts Performance
Before calves arrive at the feedlot, they can make a number of stops along the way — from the ranch of origin, to the stocker or backgrounder operation and then to the finishing facility. A proven way for feeding operations to reduce illness and increase sustainability is by choosing calves with an immune system capable of handling infectious challenges they could encounter along the way.

“We care for these animals, and in the spirit of being true stewards and good stockmen, we naturally look for information that can help us improve overall herd health and operational outcomes,” said Elizabeth Fraser, DVM, Beef Technical Services at Zoetis. “Selecting well-managed calves that have been well fed and received vaccines at the ranch consistently result in better health and productivity in the feedyard.”
Buying calves that were preconditioned ahead of stressors like shipment and commingling helps ward off potential health risks, such as bovine respiratory disease (BRD). BRD accounts for annual feedlot losses of $1 billion due to loss of production, increased labor expenses, pharmaceutical costs and death.
Purchasing cattle enrolled in a third-party verified preconditioning program like SelectVAC® from Zoetis provides additional insight into the cattle being purchased and improves transparency. SelectVAC details how the cattle were managed, products administered and the timing of product administration.

“Each feedyard has its own arrival protocols,” said Dr. Fraser. “Having verified information detailing previous vaccination and herd management information can help feedlots make important initial processing decisions.”
Preconditioning results in better health and feedlot performance by reducing feedlot morbidity and mortality, and lowering treatment costs. Calves enrolled in SelectVAC demonstrated better performance than other preconditioning programs in a commercial feedlot study and were more than four times less likely to get sick or die than calves with an unverified health history.
Performance improvements seen in preconditioned cattle included higher average daily gains, improved feed conversion and lower cost of gain. These differences increased the value of preconditioned calves for feedlot managers by $5.25/cwt.
“If you have animals facing the challenges of shipment and commingling, their potential for success is enhanced by being armed with a properly stimulated immune system,” said Dr. Fraser. “Actively sourcing preconditioned cattle will increase their potential to remain healthy and productive, which is definitely an added value for buyers.”
To learn more about the SelectVAC program, please visit SelectVAC.com. For more information about preconditioning, visit with your animal health adviser or Zoetis representative. 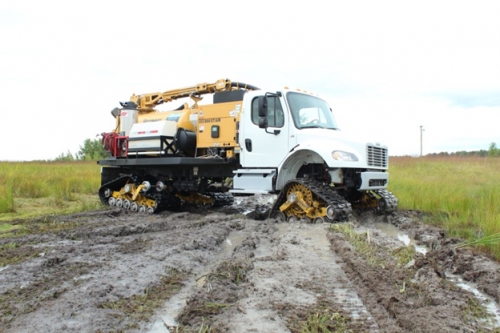 Mattracks, the original manufacturer of rubber track conversions, has expanded its track offerings for automotive/truck applications with the release of its 400M1A1 model.  This expands the Mattracks automotive lineup by doubling the load capacity of the 200 series, which was the largest truck system prior to the 400 series release.  The 400 series is ideal for use on commercial vehicles weighing up to 40,000 lbs that require off-road mobility.  Designed for heavy loads and smooth rides, the 400M1A1 track conversion system features a 20” wide front track and 30” wide rear track.   The 400 series is a hub mounted design in order to facilitate a fast conversion from tires to tracks with little to no vehicle modification.  This model also features Mattracks exclusive, patented rubber torsion anti-torque system, steering assist option, rocker suspension, and rear external idler for optimum sprocket wrap and fender clearance.
Mattracks 400 series track conversion system adds versatility to commercial and industrial specialty vehicles such as drilling rigs, aerial devices, vacuum trucks, and other service/maintenance vehicles.  Markets include, but not limited to: oil and gas, utility, agriculture, construction, mining, exploration, tourism, and search and rescue.
Located in Karlstad MN and established 22 years ago with inspiration from the founder’s 12 year old son Matt, Mattracks now manufactures over 100 different models of Rubber Track Conversion systems for ATV’s, UTV’s, Trucks, Tractors, Custom Harvesters, Swathers, Sprayers, Construction Equipment, Trailers, and more.  Additional information is available by contacting Mattracks, Inc. at 218-683-9800, 877-436-7800 (toll-free US & Canada) or 218-436-7000. Visit us online at www.mattracks.com, follow us on Facebook, Twitter and YouTube or email us at sales@mattracks.com.