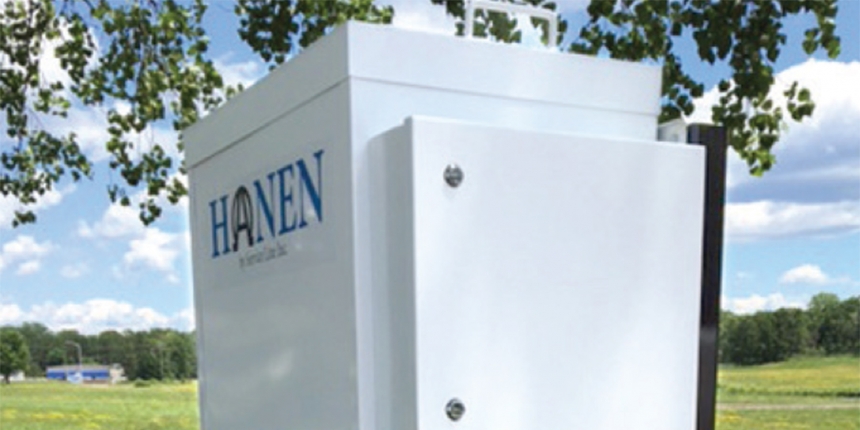 Service Line, Inc. has expanded their cattle feeder product line with the Hanen Model LSF- 2 Automatic Programmable Livestock Feeder, which is designed to dispense the correct levels of nutrition to wide range of livestock, including cattle, horses, pigs, goats, deer, and more. Unlike a creeper feeder, the Hanen Two-Head Automatic Programmable Livestock Feeder is programmed to accurately dispense measured feed, up to 6 feedings per 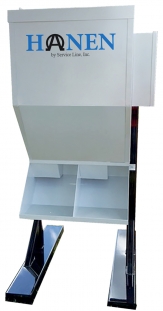 day. The feeding cycle is totally programmable and animals quickly respond to an audio signal that lets them know their feed is ready.
The Hanen Model LSF- 2 Automatic Programmable Livestock Feeder (solar powered version optional) is ideal for finishing beef and preparing show cattle. Studies have shown that a balanced diet evenly distributed throughout the day creates a calmer animal. Programmed grain rationing provides less feed for better nutritional value, but not loss of growth. Additional benefits of programmable feeding include reduced labor costs, lower wasted feed, and more free time for those long weekends.
The Hanen Model LSF 2 Two Head Programmable Cattle Feeder is available along with two flagship Models: the LSF-10 Ten Head Feeder and Model LSF-20 Twenty Head Feeder, both of which are solar-powered. Manufactured in the USA, the durable feeders are constructed of heavy gauge steel and are 100% powder-coated for extreme conditions. Dave Barney, president of Service Line, Inc. says, “I constantly strive to provide controlled nutrition that will result in high quality animals”.
“People have to realize that they’re just not as strong or as quick as they used to be, but there are ways they can keep farming despite their injury, illness or disability,” he said.
Ohio AgrAbility is a program provided through OSU Extension in partnership with Easter Seals Greater Cincinnati.

Researchers in the Department of Veterinary Sciences at the University of Wyoming will use a $149,000 grant from the Foundation for Food and Agriculture Research to help develop a quicker, cheaper and more accurate test to detect brucellosis.
The money will help fund studies to detect swine brucellosis (Brucella suis), which is prevalent among feral swine in most of the United States, but not yet in Wyoming. B. suis can also infect domestic swine and cattle where their populations overlap.
The money will help continue efforts toward creating a polymerase chain reaction (PCR) analysis, an ongoing effort by Dr. Brant Schumaker, DVM, and associate professor in the department.
There is a growing pressure for hog producers to move from confinement production to natural or pasture-raised swine. Serologic (blood) testing cannot discriminate between cattle brucellosis (Brucella abortus) and B. suis exposures. 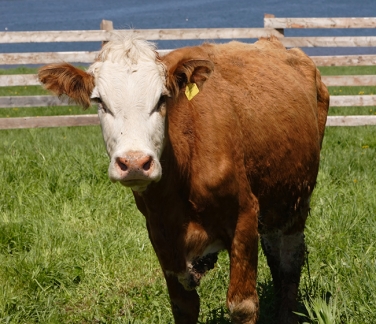 “I think most of the state understands how much of a problem cattle brucellosis has been in the Greater Yellowstone Area,” said Schumaker, epidemiologist at the Wyoming State Veterinary Laboratory.  He will lead the collaborative project with Texas A&M University.
“If this disease were to come to the state, we would have a hard time differentiating between the two organisms,” said Schumaker.
UW and Texas A&M will match the grant for a total of $299,000 for the project. Funding is through the foundation’s Rapid Outcomes from Agricultural Research (ROAR) program.
Texas has had several instances during which cattle in contact with feral swine have tested positive for brucellosis.
“It’s very complicated to try and differentiate between swine and bovine brucellosis,” said Schumaker.
Culture testing is the current gold standard for detection, said Schumaker, but takes at least 14 days, is about $600 per animal and requires the animal be euthanized. Only 30 to 50 percent of animals that test antibody-positive in blood are culture-positive.
Schumaker said the research is a continuation of Ph.D. student Noah Hull’s studies at UW. The team is in the final stages of testing a PCR assay for bovine brucellosis. PCR can produce millions of copies of a section of DNA in only a few hours, yielding enough DNA required for analysis.
Preliminary testing has shown researchers are able to identify more than twice the number of serologically positive animals compared to culture and obtain results in two to three hours at one-fourth the cost.
Texas A&M researchers will collect and send swine tissue samples to UW for testing. Schumaker said there are more than 29 collaborators on the grant. Members include representatives from federal, state and local governmental agencies.