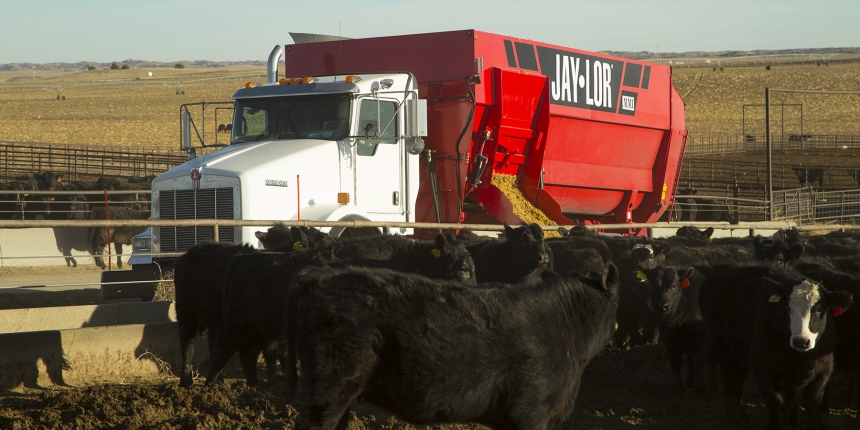 Jake Tamminga, President of Jaylor, proudly announced that Jaylor has purchased controlling interest in MMI International Inc. (formerly Mohrlang). MMI is a leading manufacturer of 4 auger horizontal feed mixers, delivery boxes, and manure spreaders, primarily serving the feedlot industry in the USA. “For decades we’ve been die-hard proponents of the vertical auger, and on most operations it is the best solution, but there are some commercial applications where the horizontal mixer has proven to be a better fit.” Mr. Tamminga further noted, “The proprietary quad auger design that Dan Powers, and his team at MMI, developed, takes advantage of modern hydrostatic smart controls while still being functionally simple and reliable.”

Jaylor is offering three truck mount models of the Horizontal Quad Auger TMR Mixers: H1650, H1850, and H1950 ranging in capacity from 650cu.ft. (18.4m3) to 950cu.ft. (26.9m3). Simplicity is the keynote, as the entire range has been engineered to be simple yet robust, providing years of trouble free performance.
The Hydrostatic Planetary Drive system, with soft-start and variable speed provides quiet operation and allows for precise mixing and feed out speeds without excessive engine RPM, while effectively eliminating harmful shock-loads typical of conventional PTO designs. Sized to deliver high power and torque for optimum performance at lower engine speeds ensures smooth mixing and feed-out of all rations, effectively lowering fuel consumption while saving time. The innovative hydraulic reservoir incorporates storage, cooling and oil filtration in one compact, simple package giving you easy access for maintenance. The ability for continuous mixing on-the-go also translates to more loads per hour.
The smart PLUS+1® control system displays mixer performance in real time on the operator interface. It also records temperature and pressure exceptions for troubleshooting and predictive maintenance of the hydrostat system. An intuitive joystick control activates all mixing and feeding functions, allowing operators to concentrate on feed placement without needing to look down at the controls. The joystick is ergonomically positioned next to the driver’s seat in reach of the scale indicator. The high capacity 48” (122cm) wide door allows for rapid discharge yet precise metering of lower volume rations when needed. Paired with the single joystick control, one-pass feeding is easy to achieve even for novice operators. 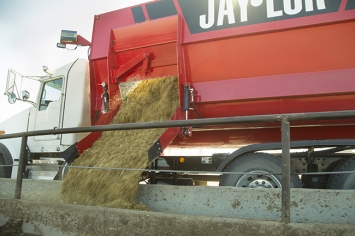 A simple discharge chute design eliminates the need for augers, chains and bearings, translating to lower maintenance and integrated magnets are standard for livestock safety and health. Precise adjustment of the chute speed gives the operator fine control over the raise and lower rate which improves efficiency while delivering feed.
The rugged design and construction of the engineered mixer body, eliminates the need for a sub-frame, making it lighter and stronger. Heavy duty scale tubes and mounts safely house critical load cells  ensuring precise feed monitoring in all conditions. Industrial grade, oil-resistant seals keep oil in the oil bath and dirt out which facilitates efficient lubrication of all drive components for long life and smooth, quiet operation. Simple tensioners keep positive control on the chain for trouble-free operation. Grease zerks are routed to a central location for easy access, simplifying daily maintenance of all bearings to insure smooth operation and long bearing life. Extra heavy duty drive chains and sprockets deliver rugged reliability and long component life. Single latch rear doors provide easy access for system inspection and maintenance.
The innovative quad-auger design has been engineered to efficiently handle rations with a wide range of ingredients from wet brewers to high-forage diets. Through hundreds of mix studies, the design has been refined to consistently mix partial and full loads without the dead spots found in conventional 4-auger mixers. Conveniently located in full view of the loader, the remote scale display provides weight and recipe readout for loading accuracy. Feeding before daybreak is simplified with an LED spotlight to
Illuminate bunks and the gravity discharge chute.
An industry-leading warranty, is offered: 3 years on the structure, 4 years on the scale system and one year on the drive system and rest of the product. By the end of the year, Jaylor will be introducing the full line of MMI products including Truck Mounted Manure Spreaders, Delivery Boxes and Trailer Model Horizontal TMR Mixers.

DAN POWERS
Throughout its 60-year history, MMI has gained a reputation of building simple and reliable products that last, possible in large part by understanding the needs of their customers. Dan Powers, CEO of MMI International, comes from a feedlot background; being a former MMI customer he knows just what feedlot managers and owners are looking for in equipment.
“MMI is widely known among feedlot managers for building rugged, reliable horizontal auger mixers that operate efficiently, and with long term service.” Mr. Powers added “these benefits and Jaylor’s long term stability and international marketing success, will provide assured reliability for all our customers.
As far back as his undergraduate days at the University of Nebraska, Dan was involved in the cattle industry. He has acquired an enviable background in this industry and his knowledge has made him a leading expert. Dan has served the many feedlot clients of MMI whose need for a reliable, 4-auger horizontal TMR mixer became a reality with its efficient operation providing a quality mix at full rated capacity. Jaylor’s Horizontal Quad Auger TMR Mixers are designed by cattlemen for cattlemen.

BECAUSE NUTRITION MATTERS
The core philosophy of Jaylor’s TMR Mixer line is nutrition. When you purchase a Jaylor you not only receive a robust and reliable mixer, but a mix that is the most consistent in the industry and resistant to sorting. This is why a Shaker box is made available, allowing producers to monitor and evaluate their ration on a daily basis. Mix uniformity and resistance to sorting define the optimum TMR mix. A TMR mix is the result of an interaction 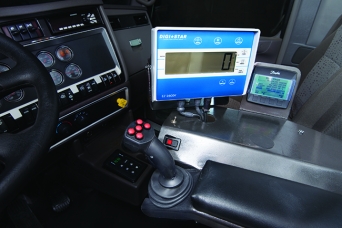 between mixer design and performance, ingredient characteristics, and operating procedures. The Shaker Box provides a simple way to test the uniformity of particle size and ingredient distribution within a batch, as well as between loads. This also enables fine tuning of mixing procedures to create the optimum mix, as well as to monitor mixer performance. “You may already have a nutritionist, and that’s perfect.” says Dr. Alan Vaage, Ruminant Nutritionist for Jaylor “At Jaylor we want you to think of us as your ‘feed mixer’ nutrition specialists. When you purchase a Jaylor mixer, we are at your service, so please feel free to email us, anytime, at nutrition@jaylor.com. We’ll answer all your nutrition questions. That’s what goes with being a Jaylor customer!”

VERTICAL TMR MIXER LINEUP
The Horizontal Quad Auger TMR mixers compliments well Jaylor’s extensive lineup of Vertical TMR Mixers. Models ranging from 50ft3 to 1250ft3 are available in many configurations including trailer, truck, stationary and self-propelled. The Jaylor lineup has the right size for every operation and a full range of options is available to create a tailored feeding solution for every application.
Of particular note is the 5000HD Series Twin Auger TMR Mixers which are built extra robust, and designed for heavier loads on rougher surfaces than the standard mixers. A heavier frame and sub-structure, cast dual-axle walking beam assemblies with extra heavy-duty axles and hubs, and heavier duty wheels and tires come standard. They also come with thicker auger flighting and floors. Together these enhancements make the Jaylor HD mixers capable of blending and transporting mixes that are up to 75% heavier; ideal for large operations. 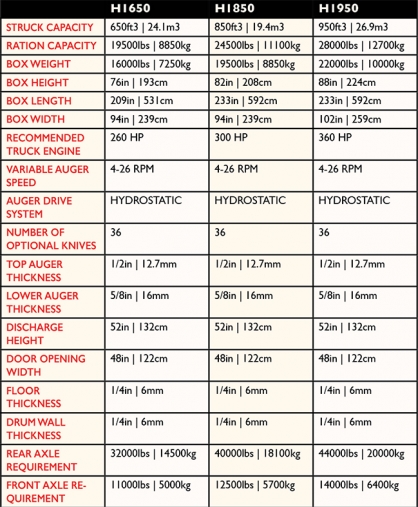 Every  Jaylor Vertical TMR Mixer model comes standard with Jaylor’s patented Square-Cut Auger which produces a quality mix faster and cleaner. A fundamental feature of the Jaylor auger is the ‘Square Cut’ edges that contribute to its industry-leading ability to process baled forage and other roughage, and mix it into a uniform TMR that resists sorting. The improved cutting action means less pressure on the mix and improved feed ration for your animals. The patented sloped top prevents bridging of round bales, allowing them to be rapidly cut apart while increasing the mixing action. The unique slide plate gently and efficiently gathers the feed into the auger in a way that decreases friction on the feed, reducing horsepower requirements by 20%. Less friction results in reduced power consumption, which translates to lower operating costs for you. Jaylor uses specially designed and oriented knives for maximum cutting efficiency when processing long forage. These self-sharpening are selected and tested for durability and long life.
Among growing list of patents and innovations the auger is still where the magic happens. “It’s a square cut which allows feed more quickly reach the bottom so you have a quicker mix and more efficient processing.” says Jake Tamminga, President of Jaylor. “The knives are located and oriented in such a manner on the auger which gives it a more efficient cut by using a slicing motion instead of forcing them into the feed. That’s why our mixers use less horsepower; when you take excess horsepower that energy is wasted in the destruction of fiber.” Tamminga adds. With traditional round augers bales tend to stay at the top of the mixer for a long time, especially on smaller units. The open sections of the Jaylor Square-Cut Auger allow the bale to quickly drop where the lower knives can break it apart and process it faster. The Tungsten Carbide coating creates a harder surface on the top of the knives, allowing the bottom to wear faster which keeps the knives sharp.
Following last year’s acquisition of a number of product lines from Trinovation Inc., including Jaylor’s Dump Wagon and Manure Spreaders, the company is set to continue to be an industry leader of ag products which supply the input and handle the output of modern livestock practices.

With the Next Generation of TMR Mixers and New...