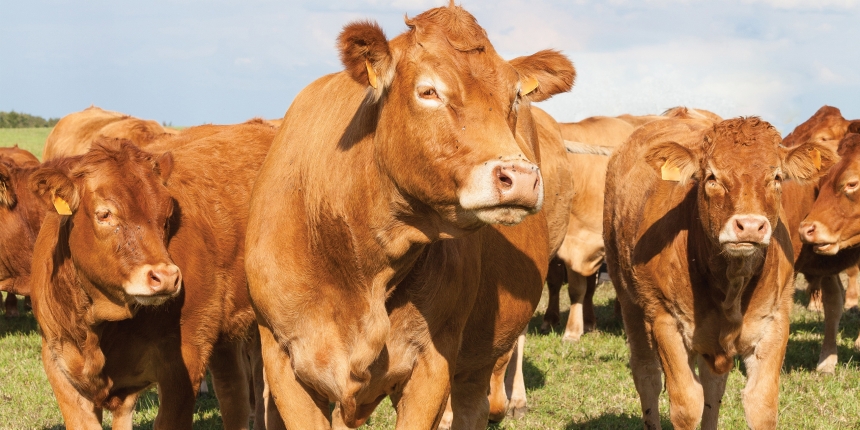 The Oxford dictionary definition of “biosecurity” is procedures intended to protect humans or animals against disease or other biological agents. A broad term, it brings many different ideas to mind for different people. Often it is associated with visitors or surgical and treatment precautions. While these are all part of the picture, biosecurity is a mindset that should go right down to the daily tasks undertaken by everyone on your operation.

Biosecurity for beef cattle will look different than biosecurity practiced in poultry, swine and even dairy cattle. The core principles, however, remain the same shaping the mindset of your herd management on a daily, seasonal and annual basis. Similar to safety, animal health and biosecurity is a mindset more than a list of rules or standards. But not everyone will have the same mindset you do when it comes to your animals, making it important to have a program outline and be willing to enforce it.
Small steps not only go a long way to safeguarding your herd against harmful diseases, improving your biosecurity measures could solve certain health issues you may have been struggling with. Much of the time, ongoing health issues stem from inconsistent or improper management we have become desensitized to. If you know the weak areas where pathogens are introduced and transmitted, you will be able to develop preventative measures around them.

Identify the key areas
When experts talk about biosecurity in cattle, they usually draw up three main categories. These are animal and human traffic, isolation and sanitation. Details that make up a strong or weak biosecurity protocol tend to fall into one or all of these areas. Essentially, just about every part of your program will trace back to them.

High-trafficked areas are a haven for biological hazards and contamination. Areas involving co-mingling, such as chutes, trailers, loading docks, holding pens and alleyways are all prime examples of this. Besides involving a lot of nose-to-nose contact and bodily fluid exchange, these areas also tend to accumulate manure and dirt, but don’t always receive the cleaning detail they deserve.
Another sometimes forgotten aspect of “traffic” is the cross-species aspect. As a New Mexico State University Extension handout explained, part of traffic control means stopping or minimizing contamination of cattle, feed and equipment used for feed, transport and other activities. Animals outside the herd, including domestic ones running around, pests and wildlife can also be attracted to highly trafficked areas.

Issues such as feral swine, rodents and birds getting into the feed bunk all infringe on your biosecurity, mitigating or eliminating them should be on the priority list. Likewise, keep your farm dogs, cats, horses and other animals up to date on their vaccinations and limit their exposure to your beef herd when possible.

Isolation is a very familiar precaution against disease, usually this encompasses keeping new herd additions separate for a period of time and isolating sick animals. This could also include separating groups according to low (mature groups) and high (young or immunocompromised) animals.

Finally, sanitation is exactly what it sounds like. Many health issues can be traced back to poor sanitization in environment or equipment. This involves having the right equipment and labor. The chemicals you use for cleaning should be appropriate for the task and environment – are you checking and following the labels before purchase?

Another aspect that falls between the cracks is how cleaning is done. Some people just use a quick hot water rinse and others will actually get in and scrub. Make sure you keep your team on the same page for consistency. This is where your vet can be especially helpful by taking swabs and cultures of facilities and equipment to make sure your protocols aren’t working. And if they’re not, he or she can help develop something better.

Some numbers to consider
The United States Department of Agriculture Animal and Plant Health Inspection Service released some study results back in late 2009 on biosecurity in U.S. cow-calf operations. While this is a bit dated, it provides a bit of insight on what is likely to happen in “real world” type settings.

According to this study, over 60% of operations acquired new animals within the past three years. Only about a quarter of them required testing for brucellosis, 4.5% for bovine viral diarrhea, 5.4% for bovine tuberculosis and 2.1% for Johne’s disease before being added into the herd.

Many producers cited they leased or purchased new bulls regularly. About a third of operations with bulls over 18 months of age or not virgin required animals be tested for Tritrichomonas before breeding. The study noted this percentage was higher for operations with over 200 head of cattle. While this number could be improved, it showed a significant change in behavior form a 1992 study were only 4.4% of all operations tested their bulls.

Something to really put in perspective is the number of visitors coming in and out of animal facilities on a regular basis. In this study, researchers found nearly 30% of operations had 10 or more visits per month. This includes veterinarians, haulers, nutritionists, sales reps, neighbors and the like. Again, the larger the operation the more likely they were to have multiple visitors within the same time frame as a smaller one.

While this is inevitable, you can how visitors come onto your property and interact with animals. This can even be extended to hosing down vehicles or directing specific routes of traffic.

Speaking of “visitors,” let’s not forget the wildlife kind. When raising cattle, you are guaranteed to encounter some form of wildlife be it in the forms of shared rangeland, fenceline contact or pests like rodents and birds.

This study found within a 12-month period, wild cervids like deer and elk had contact with beef cattle on over 70% of operations. Other species in varying percentages included horses, pigs, dogs, goats and cats. Likewise, flies and other insects are also vectors of disease across animals and livestock operations. Well over half of all beef operations reported to using some sort of rodent (65%) and/or fly control (82%).

Practical tips
All the statistics and knowing what you “should do” doesn’t mean anything if there isn’t a practical way to incorporate biosecurity to your day-to-day farm or ranch life. There’s a wealth of resources out there from USDA, universities and extension agents. But to keep yourself from getting overwhelmed, or over-agonizing over every aspect, it’s easiest to go by the three main categories or a short list of general health and sanitization guidelines.

USDA-APHIS has a general fact sheet of some good guidelines for all types of livestock producers. They outline four “dos and don’ts” categories such as – keeping visitors distant from animals, encouraging cleanliness by training employees and visitors and having a good facility sanitization routine, not cross-contaminating with neighbors and keeping mindful when visiting other animal facilities so you don’t bring anything home.

Some ways people manage visitors include keeping a logbook, using footbaths or boot covers and keeping “clean zones” where you don’t allow access. When it comes to employees, family members and anyone else involved with operations or animal care, keep everyone on the same page. Have written protocols for how to clean things, install boot washing stations and encourage mindful practices.

Keeping biosecurity in check need not be overly elaborate or frustrating, but it should be deliberate and mindful. With a healthy dose of practicality and realism, you shouldn’t be afraid to make changes that will lead to improve – even if they be a bit inconvenient. After all, your animals’ health is worth it.