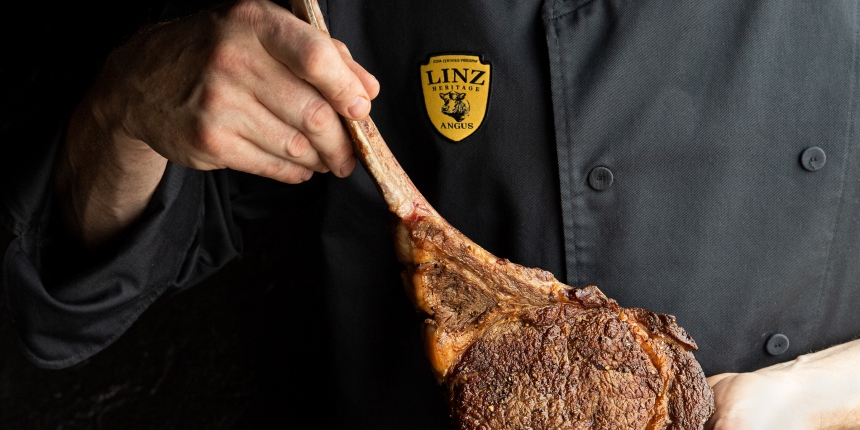 The cornerstone of Linz Heritage Angus is found in its tagline, “Superior Genetics. Superior Quality.” But for Fred Linz, owner of Linz Heritage Angus, that tagline is what drives Linz and his entire team in the goal of producing the highest-quality Angus meats – from the seedstock to the plate. Linz’ love for ranching started with his family’s small butcher shop, Meats By Linz, which began in 1963 and provided exceptional cuts of meat to the finest dining establishments, to an expansive ranching operation that has grown to become the entity that produces the “Michael Jordan of the Angus breed and the perfect steak that can be traced back to the ranch and bull that produced it.”

It was a mere nine years ago, in 2013, that Linz realized his vision of establishing a preeminent Angus program that would result in some of the most sought-after meat by award-winning dining establishments across the country.

Linz was at the National Restaurant Association’s show at the McCormick Place in Chicago in 2012 when he first met Chris Earl with CK6 Consulting and they began talking about Linz’ goal of finding a locally raised Black Angus program that he could bring into his family’s Meats by Linz business. 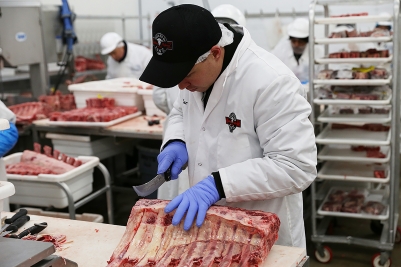 “At the time, everyone was looking for something that was locally raised, locally fed and locally harvested,” Linz says. “Local was a big thing.” Once the show was over, Earl took Linz around to a few farms in Southwest Wisconsin and Northeast Illinois.

“We went and visited maybe three or four different places and the last place we visited was Riley Brothers Angus in Darlington, Wisconsin and I just fell in love with what they had going on there. Jeff and John Riley own the operations, with Glenn Davis managing the cattle operation,” Linz says. The Riley brothers had a bull named “American Made” that Linz purchased 1/3 of (as did ABS in DeForest, Wisconsin), with the Riley brothers retaining the other 1/3.

“This was our first animal in the seed stock operation business,” Linz says. Not long after that, Linz purchased a 140-acre parcel in Crown Point, Indiana to provide his newly established seed stock business with a home.

“Today’s steakhouses and restaurants all want to know where their products came from and I wanted to have more control over the raw material that we process. So why not get started on the cattle side of the business?” Linz says. After purchasing the Indiana property in 2013, the Riley brothers continued to help Linz  establish himself in the business as he purchased his first calf heifers and continued to grow his herd. In 2016, Glen Davis joined Linz Heritage Angus to run the ranch’s seed stock operation.

“At that time, we were leasing three different farms around our Northwest Indiana area to support the amount of cattle that we were handling. We rapidly grew and we produced over 600 head, eventually reaching close to 1200 head, with annual sales beginning in 2017,” Linz says.

For Linz and his team of partners, their goal is to create a program where it’s a true “conception of plate” for the end user, namely the white tablecloth industry.

“We’re able to provide something that no other steak cutter in the United States is doing and that is selecting genetics. Breeding selection, or calving these animals – we’re raising and selling females, selling bulls, retaining heifers, doing tons of flushing and a lot of embryo work,” Linz says.

It was in 2020 that Anthony Randall joined the Linz team to work with the ranch’s customers in the calf buyback program. “He would work with producers to purchase back calves from herds that were using our bulls – whether it be for natural service or artificial insemination. He would select which field that we would send those animals to the feedlots to grow and determine when they were ready for harvest,” Linz says. The harvesting facility collected carcass data, as well as the feedlot data, and Linz Heritage Angus used that info to further refine their calf production.

Indeed, since first connecting with other industry partners in 2012 and 2013, Linz has devoted a lot of time to learn from the experts, while also honing in on his desired outcome. And his hard work is paying off as the Linz Heritage Angus herd has proven to boast the best genetics available. These genetics are part of the company’s focus on herd advancements and are what make the Linz Heritage Angus some of the most sought-after, high-performing cattle in the country. 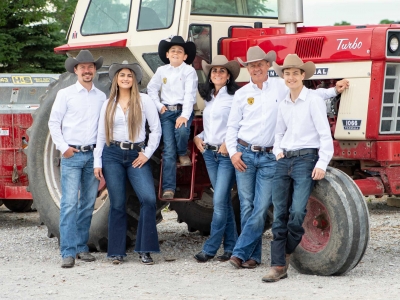 Recently in December 2021, Linz purchased a 5,040-acre ranch in Byars, Oklahoma, called Linz Heritage Angus at the Blue Branch Ranch, allowing the company to consolidate all of their animals in one location.

“Now we have everything under one roof rather than on multiple farms,” Linz says. In January 2023, we will host our 6th bull sale at the Blue Branch ranch in Byars, OK.

“This growth we’ve experienced gives us an opportunity to separate ourselves from the norm. We’re not just the normal steak cutter you find throughout the United States. We’re a steak cutter that goes above and beyond what any other operation would do. And we’re starting from ground zero with these animals.”

Linz’ goal is to continue to enhance the quality of the ranch’s end product, so to further control this quality, the company recently closed on the Timpas Feedlot in Rocky Ford, Colorado, which is now called Linz Heritage Angus at Timpas Feedlot.

“Basically, we are adding missing pieces to the puzzle,” Linz says. “It’s a 10,000 head feedlot that is managed by Fred’s partner in the feedlot, Anthony Randall and it provides the opportunity to repurchase those calves back from our cattle producers that are using our bulls. We can then have complete control of how those animals are fed – namely, how they’re being fed and what they’re being fed. And then we also have the opportunity to collect all very accurate data from that feedlot and harvesting facility that provide information not only to ourselves, but to the cow-calf producers as well.”

Want to learn more about Linz Heritage Angus or visit the operation’s Byars, Oklahoma ranch? On January 5, 2023, during the Cattlemen’s Congress in Oklahoma City, OK, Linz Heritage Angus will be providing an open house and tour of the ranch in Byars, OK. Roundtrip transportation will be provided to the ranch from the fairgrounds in Oklahoma City. In addition, the ranch will be hosting its bull sale on January 19, 2023. For more information visit linzheritageangus.com.