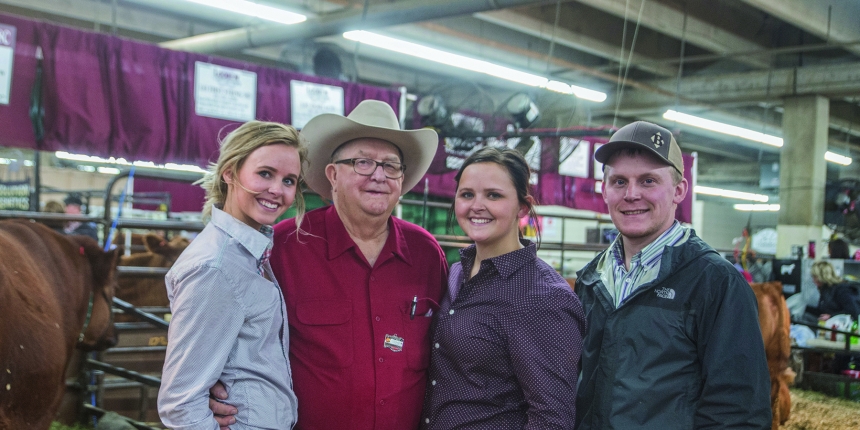 Heading into February, the Lodoen family is busy preparing for their 41st annual Lodoen Cattle Company Production sale on Tuesday, March 28, 2017 at Kist Livestock in Mandan, ND, where 50 of the finest Red Angus bulls will be offered for sale. To learn more, potential buyers can go to the Lodoen website (http://www.lodoencattle.com) or at Superior Livestock Auction (www.superiorlivestock.com).
According to Jennie Lodoen, daughter-in-law of Lodoen Cattle Company founder Leonard Lodoen, “Because our ranch is located five miles from the Canadian border near Westhope, having our sale in Mandan brings us closer to our customers. Although our customer base is centered around North Dakota and South Dakota, we have had the privilege of selling bulls throughout the United States and Canada.”
This year also marks the 80th birthday for Leonard, who is known throughout the region for his research on cattle genetics and studying pedigrees and cow families extensively before purchasing a new sire. It was this research that led Leonard, after he had been in the Horned Hereford business for over 40 years, to add Red Angus genetics into his herd in 1994. According to Jennie, “Leonard chose the Red Angus breed for many reasons including fertility rate, tremendous maternal instincts, great milking ability, easy fleshing, easy keeping in North Dakota’s extreme weather environment and a docile, agreeable personality.” 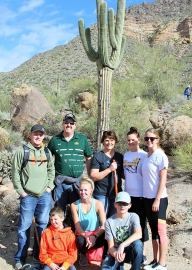 Based on Leonard’s knowledge of cattle genetics, Jennie says, “When we select new genetics to add to our herd, besides studying pedigrees and EPDs we like to see offspring or siblings because we believe phenotype to be just as important as numbers on paper. Our environment demands a bit larger frame size than those in the south.”
Josh Tolbert of Tolbert Cattle Company located near Lone Grove, OK is impressed with everything he sees in Lodoen Cattle Company. “Lodoen’s L83 ranch is such an incredible place to visit and view top of the line Red Angus genetics. The work ethic that is implanted into the management of the operation spills over into the overall hospitality of the entire family and crew, making the journey to Westhope, ND all that more enjoyable. Top of the line genetics, cared for by top of the line individuals.”
In addition to his pride in the Red Angus genetics, Leonard takes great pride in the Lodoen family being part of the operation. Leonard’s son Matt and Jennie joined the operation in 1994. In addition to raising cattle, Matt and his son, Ben work the soil raising corn, soybeans, wheat, barley and canola. 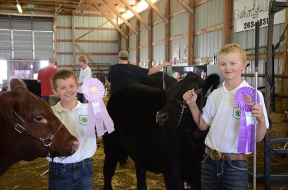 Jennie says with a chuckle, “Matt and I have six kids, yes I know six, and all are part of the operation in some way. We both grew up around livestock, so we knew that we had to get our kids involved with the critters as much as possible. All of the kids started out in 4H with cattle, of course. As they made friends and developed personal interests, we added pigs, lambs, and goats to our string of summer shows. The kids quickly found their favorite species and away they went. I very firmly believe that great kids are raised among livestock. The care and responsibility needed to keep an animal healthy and happy is a life lesson no one can read about and learn.”
In addition to 25-year old Ben, Rylee, who is 21, helps outside as much as needed while also building her own graphic design and clothing embroidery for promotional needs.
The 19-year old twins, Molly and Maddy both attend college but are back to help out with whatever areas of operation are needed. Meanwhile, Wyatt, 15, and Zane, 11, attend school at Westhope and help out after school and during the summer months.
Larry and Patrick Svenningsen, who own Svenningsen Ranch near LuVerne, ND, have done business with the Lodoen family for years. “The Lodoens are a wonderful family. They are great to work with and very helpful to your needs, especially when it comes to cattle. We have purchased both bulls and heifers from them over the past few years and couldn’t be happier with their service and dedication to us and their cattle business. It’s always a great pleasure doing business with the Lodoen family!”
At the same time, Lodoen Cattle Company is also building its cow/calf side, calving out approximately 225 cows each spring. “We normally start around Feb 1 each year. We have 35 Hereford cows in that bunch that we still breed them back to Herefords. Ben and Rylee have been purchasing some Herefords thru the years and that keeps us in the breed. We sell some females each year private treaty, thru online sales, or state sales.”
Although Lodoen Cattle Company does not have quite the numbers yet to warrant a female sale of its own, the goal is to build the Red Angus numbers by embryo transfer work, female purchases, and keeping as many replacements as possible.  “We do believe in buying top quality herd bulls, but we do quite a bit of artificial insemination (AI) as well. We AI most all heifers At the end of April along with the cows following through the month of May when all cow/calf pairs get moved to pasture for the remainder of the summer and fall.”
In addition, Lodoen Cattle Company does market its cattle at some of the big shows throughout the year. “We like to get a sample of our program out for the public to see. Each year we try to display cattle at the Northern International Livestock Expo (NILE) Stock Show held in Billings, MT in October and the National Western Stock Show (NWSS) held in Denver, CO in January.”
Leondard, Matt and Jennie also believe in the importance of the National Red Angus Association of America. “As a family, we see the importance of attending National Red Angus Events, and Matt and I attend the National Convention each year to learn mostly from other breeders from around the country: what type of cattle work in their environments, what kind of demands they have for breeding stock in their areas, and most importantly, to develop friendships with other breeders. We consider that to be most valuable!”
At the same time, Ben, Rylee and Molly have taken heifers to show at the National Junior Red Angus Event and also the Junior National Hereford Show. All six siblings are involved with the livestock extensively and the program has grown to be very much theirs as well as Leonard’s, Matt’s and Jennie’s.
For the entire Lodoen family, raising their cattle is their life. This poem penned by Don Bishop expresses their belief and their love for their cattle business.

The Tradition
Some folks just don’t get it.
They think owning cattle makes no sense.
It takes too much time, too much equipment
not to mention the expense.
But the fondest memories of my life
- they might think sound funny –
were made possible by Mom and Dad, cause they spent the time and spent the money.
You see, the most important lessons
Helping values grow so strong,
Come from loving cattle
And passing the tradition on.

When talking to the Lodoen family, there is little doubt the respect and admiration they have for Leonard Lodoen. Under his watchful eye, the Lodoen Cattle Company has achieved the notoriety across the cattle industry. Most notably, it has been Leonard’s impeccable eye for good genetics that has put the operation on the map.
At the same time, Leonard has been active in the National Hereford Association and served as president in the 1980s. He has also earned incredible respect among fellow breeders when leading the implementation of total herd reporting of data for use to develop EPDs. Leonard also served on the ND State Animal Health board and was chosen NDSU’s agriculturist of the year in 1994.

Leonard’s wife, Maysil has heard Leonard boast over and over about his pride in Matt and Jennie, along with Ben and Rylee on keeping the operation successful as he begins to step back from the day-to-day ranch management. Maysil says, “After hearing that Ben is headed to Ft Worth to help another operation get cattle ready for a show, Len says I have the best help in the country right in my own backyard.”
Jennie remembers a piece of advice Leonard gave her when she was undecided about purchasing bulls that seemed a bit pricey. He replied, “When you go to a sale and you find genetics that can improve your herd, you just get that animal!”
Another of Leonard’s best lines is that “A new herd bull has to have a great mother. She passes on the traits that will add to the herd. It’s all in the cow.” Leonard has built a cowherd that is maybe the best-kept secret in the industry. They are cattle that perform in the most brutal winters and still add pounds to calves.