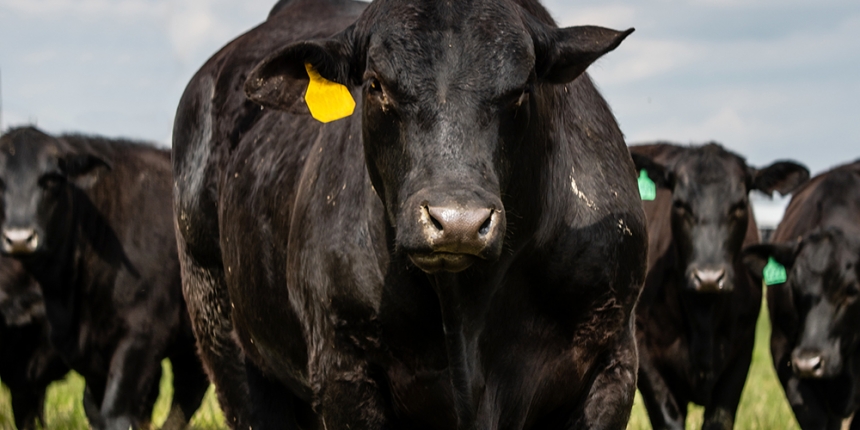 Making a Mark with Dart Guns.

Using dart guns, formally known as remote drug delivery systems (RDDS) by animal health professionals, are now an increasingly popular method of treating cattle. These systems offer a new and innovative solution to range animal management while reducing labor, time, and handling-induced stress. Like any developing technology, RDDS have their drawbacks and have raised reasonable concern and interest around the industry. In the ever-changing world of cattle management, let’s take a look at where these systems stand and what they might mean for the future.

How it all began
Traditionally, the only method to treat clinically ill calves was to manually rope and handle them. With the demographic of the average age of farmers and ranchers increasing, whilest skillful willing labor is decreasing, a way to make the work more efficient was a given. The idea of remote system was first developed and implemented in Kansas just over 20 years ago. Around this time powerful low-volume antibiotics were becoming more readily available. This made the notion of remote delivery even possible, evolving from the low-volume tranquilizers game wardens use to capture wildlife with.

For a handful of ranchers, it was only natural to adopt this concept. Largely by word of mouth, the practice moved into the outside cattle world and became part of routine management for some producers. Pharmaceutical manufacturers soon caught wind of what was going on, and they produced cattle-specific systems.

Some causes for concern
Within the past five years especially, RDDS have been put in the spotlight and are more popular than ever before. They’ve garnered a lot of debate and discussion from all segments of the industry, from ranch hands to packers. Heat really picked up when some packers reported finding remnants of entire projectiles still embedded in carcasses on the kill floors. Reports also came in from the processing line, customers, including foreign markets and wholesale buyers. In fact, one of the big three packers reported finding as many as one embedded darts per month – an absolutely unacceptable standard.

The issues with these findings are very many. While some are more serious than others, they are all concerning nevertheless. Some include inappropriate darts in relation to the treatment, injection site damage, active drug residue, and the drug’s action within the animal’s body after delivery (called pharmacodynamic action).

Beef Quality Assurance (BQA) is responsible for being at the forefront of setting the standard for industry “best practices.” They are working to raise awareness and advocate for a certifiable, consistent methodology for dart use. Some manufacturers have already established their own. educational videos and training for buyers to use their products in a way that is BQA compliant.

How well do they actually work?
If you speak to producers and professionals who have used RDDSs, chances are you’ll hear a mixed bag of opinions. Some swear by them, citing its part of the future’s solution to labor shortages, requires less stressful animal handling, and is time efficient while still being effective. Others will claim they rarely see their use being successful and note a whole host an issue.

In response to this new issue, research as conducted on the different systems. A study at Iowa State University looked at 15 calves treated with an RDD of tulathromycin. Four out of the group were treated unsuccessfully. They also found when using 14-guage 1.9cm needles delivering the same dosage, more stress and muscle damage was done via the RDD method as compared to a traditional handheld injection.

More research conducted at Texas A&M zeroed in specifically on the association of beef quality when using these devices. It found mixed results, but it concluded darts may have some changes in beef tenderness and plasma pharmacokinetics.

This study delivered 68 dart injections and found the ½ inch 14-guage needles used were insufficient for subcutaneous injections with equally accuracy to a handheld. This is usually attributed to improper use of the gun, particularly to the rate and speed at which the projectile is launched.  Guns that can’t have the velocity adjusted are especially risky and not recommended.

Additionally, the American Association of Bovine Practitioners always underlines the importance of giving the correct dosages of antimicrobials. Inadequate dosage may not only result in a poor treatment response, it also fosters bacterial resistance. Likewise, animal welfare is a concern where muscle is excessively damaged or painful projectile parts left embedded under the skin. One of the downsides to long range treatment is the inability to examine the animals and treatment to make sure it was delivered sufficiently.

Working with veterinarians and establishing a proper protocol are extremely important for operations choosing to utilize darts. If this is something you’d like to serious and regularly implement on your operation, you should have everyone on your team familiar with the RDDS you use and its proper implementation. This requires a solid understanding of BQA, following the manufacturer’s instructions and ongoing education.

RDDS and the future
With the everchanging face of ranching, RDDS may very well find their established place in the rancher’s managerial toolbox. Many ranchers swear dart systems are part of the solution to an aging demographic and lack of skilled labor. On the other side, various packers and industry professionals have a bad taste in their mouths based on the improper uses seen. But like any technology, we can say these are the expected bumps along the road to acceptance.

Regardless, to remain successful and become more mainstream, dart gun use must be held to a standard so that beef quality and safety remains at the forefront as with traditional injections protocols. Besides assuring beef quality, it is also just as important to pursue successful treatment and animal welfare. To accomplish these ends, training and upholding standards across the board are paramount.