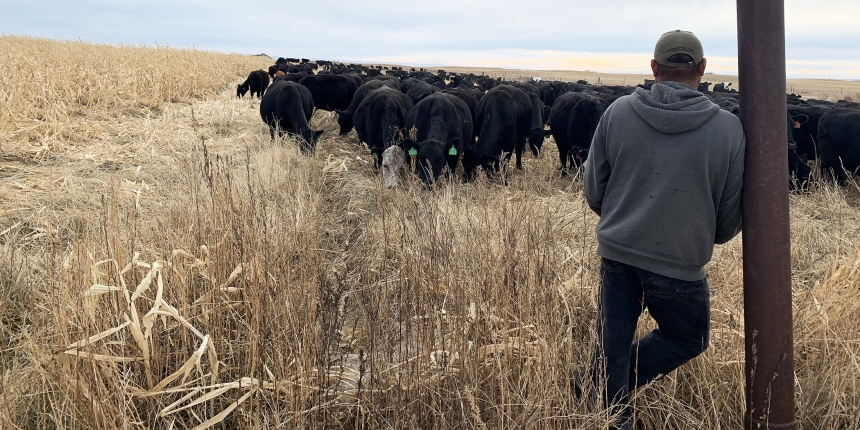 The largest expense for most stockman is winter feed or supplements.  The more time that cattle can graze without needing hay, the better.  Today there are new forage varieties that can fill some gaps in the grazing calendar, enabling cattle to graze for more of the year.

Jim and Diane Meeks have a farm/ranch near Jerome, Idaho and 15 years ago decided to quit running their cattle on public lands for summer grazing.  “We kept them home and started developing our own pastures, to grow more forage.  We’ve been improving pastures and growing the cattle herd ever since.  We needed more and better forage, with more nutrients, plus better places to winter the cattle.  We like having the cattle here at home, staying in better condition,” says Meeks.
Instead of feeding 350-plus tons of hay (costing roughly $55,000), Meeks decided to plant forages that could be grazed through most of the winter.  He consulted with Jed Bateman of AgriSource (headquartered in Burley, Idaho, and a distributer for Barenbrug Seed) and Cam Stauffer, a soil consultant for another company.
“They were a great help in determining what we should plant for winter pasture.  They came up with some tremendous ideas and we are now getting tremendous results,” says Meeks. 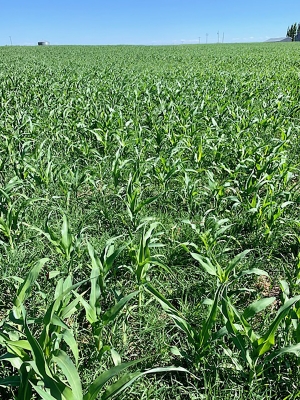 In the fall of 2016 they planted cover crops for winter feed, to enable the cattle to graze longer.  Then Meeks found an article about grazing corn.  Jed Bateman had some experience elsewhere with this strategy, along with inter-seeding with other forage so that the seeded grass could be grazed after the corn was harvested.
“We just threw a lot of ideas around, and decided to inter-seed some grass with the grazing corn,” says Bateman.  “We didn’t know how well it would do; this was an experiment.”  In the spring of 2019 Meeks planted 41 acres to forage corn and Stockmaster (a seed blend of Barenbrug forage) at a cost of $9,280 for all the seed.  The winter pasture it produced resulted in saving a lot of hay, plus gaining high-quality permanent pasture.
Meeks kept records, documenting how many cattle were put in on the corn and when, and for how many days.  “We were amazed at how well it worked.  We put the cattle into this 41-acre pasture on November 13, 2019 and came out of that pasture on March 13, 2020.  We turned out 249 cows, 203 calves and 17 bulls, then weaned the calves November 28 and took out a few cull cows.  We put 203 cows and 15 bulls back into the pasture on November 29 and they grazed there until March 13.”
The 41 acres of pasture provided 15 days of feed for 469 animals and another 120 days of feed for 218 animals, providing an estimated 8.64 tons of forage per acre.  The cost of hay that was saved for this length of time and this many animals (at $155 per ton) amounted to $54,911.85 which meant that the 41 acre pasture had a value of $1,830.40 per acre for winter feed.  After subtracting the cost for the seed, this meant a profit per acre of $1,598.40.
The success on that 41-acre piece was exciting, and prompted Meeks to plant another 60 acres this spring (2020).   “We’re hoping this will allow our cows to again graze through most of the winter.  We realize that last winter was an easy one (not too cold, not too much snow) and this year might not be so mild—but we still think this concept will be just as good or even stronger on a bad winter,” says Meeks.
The cattle had grazed all summer, and grazed the crops off in the fall, then went right into winter on the new pasture (grazing corn and grass mix).  “They were so used to harvesting their own feed that they never slowed down.  The grazing corn generally sticks up out of the snow and is easy to find,” Meeks says.
“There were some interesting things we discovered about the grazing corn.  The grass growing with it grew a lot taller.  When wind and snow knocked the corn and grass down, we thought that was terrible, but it insulated the ground underneath and it didn’t freeze as hard.  The flattened corn gave some protection for the grass and it stayed green longer.”  It still had a lot more protein than most grass at that time of year.
“We watched cows grab mouthfuls of corn stalks and green grass in February.  It made winter so easy!  If the cows can feed themselves, it’s much better,” says Meeks.
“Along with ease of winter feeding, it’s also training our cattle to keep grazing year round and never look at a haystack.  It was fun watching the videos Jed made; he has a drone and took aerial videos of the cattle grazing during winter.”
“We’re seeing a lot of benefit this spring from that cattle impact, with the grass coming back strong and healthy, with great quality and color.  The cows went across all of it, grazing intensively, and essentially fertilized it for us.  That’s the other goal, to reduce input costs for fertilizer,” says Stauffer.  This is cheaper, and better fertilizer. 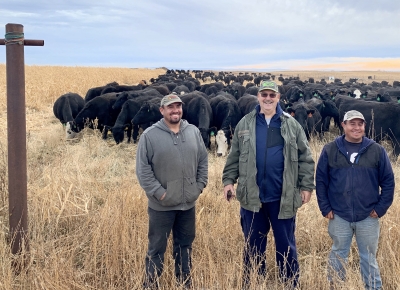 “These Barenbrug grasses really perform. Jed said they would do well but we had no idea they would perform this well and allow us to save this much in feed costs.  Our cows are in better condition and we’re saving money.  We’re glad we went with Jed’s suggestion and planted the Barenbrug grass seed!” he says.
Bryan Weech, Manager of Market Development for Barenbrug USA (a 115-year-old company that operates on 6 continents and researches, develops and markets turf products and forages) says research and technology enables them to bring new genetics to market—to create value for farmers and ranchers who want good grass and legumes.
“During the past few years we worked through Jed Bateman at AgriSource to help Jim Meeks on several projects—pasture and cover crops to graze.”  Last year Meeks was looking for a way to convert some crop ground into permanent pasture but needed forage for his cattle to graze while this transition was made.  Bateman devised a plan to address both goals, planting forage corn and over-seeding it with Stockmaster, which is one of Barenbrug’s blends of perennial grasses.
“I thought this was very innovative--one planting, to provide the corn to graze quickly, with permanent pasture coming on—with both short-term and long-term benefits.  Jim went ahead with this plan and it worked even better than I thought it would.  Whenever you mix warm season (the grazing corn) and cool season grasses (permanent pasture) there can be challenges, but in this situation the corn came on very well and the Stockmaster took off very well also.  It became established before the corn canopied over it too much.  Being forage corn, it didn’t canopy as much as field corn, but the cool season Stockmaster mix acted like there was a symbiotic relationship between those species.  The grass really benefited and the growth was very impressive,” he says. 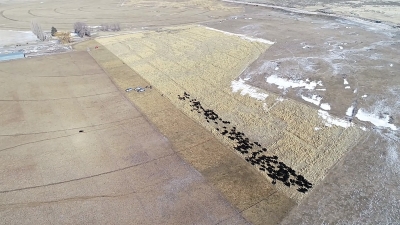 The Stockmaster mix contains cool-season grasses including a late-maturing orchardgrass with new genetics, a winter-hardy drought-tolerant tall fescue and a perennial ryegrass.  “This cool-season mix is intended for either early or late season grazing, or irrigated pasture.  This fit well with what Jim Meeks needed.  In dryland situations we have different mixes, or if it’s just an irrigated situation we have some mixes that work well.  The Stockmaster mix fits the in-between conditions.  It contains grasses that are hardy enough to withstand some dry conditions but also benefit from irrigation,” explains Weech.  It can survive without irrigation but has more production with the additional moisture.
Stockmaster represents some very good modern grass genetics and options for grazing in many conditions.  Those species of grasses also provide an excellent nutrient balance for the cattle.
Many western ranchers don’t have the luxury of full-season irrigation.  Their water sources may diminish in late summer.  “We have a mix called Barricade that does really well in those environments,” Weech says.  If these grasses can get a good start while there is water, they can continue fairly well through the rest of the season.  These are very efficient grasses; that mix includes meadow brome, tall fescue and intermediate wheat grasses.