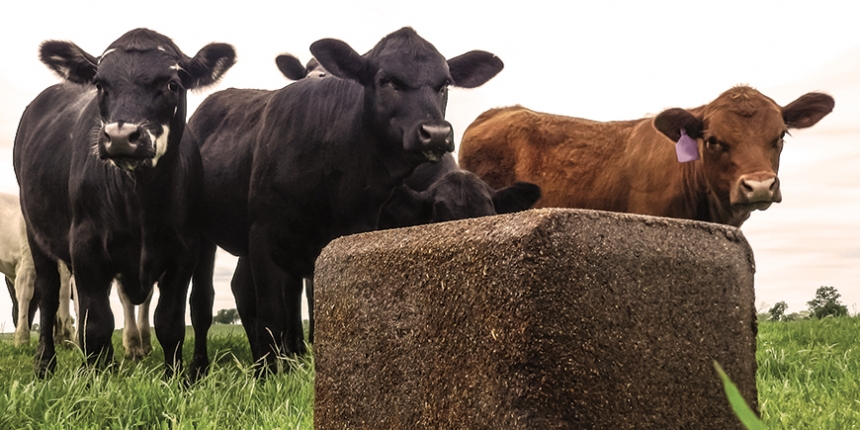 Mineral Supplementation: The Benefits You May Not See.

It’s no secret that good nutritional management is one of the mostvital contributions to a profitable herd.

Within the realm of cattle nutrition, protein and energy tend to receive the most hype due to their direct relationships to growth performance and overall body condition. This hype is rightfully placed since the first step to a good nutrition program is to identify and meet protein and energy requirements. The second step involves the lesser-discussed dark horse of the ruminant nutrition world: minerals.

Much of the discussion surrounding minerals is vague, and information is more often accepted by producers than is understood since the world of minerals is complicated and tedious to navigate. As a result, I often find myself on the receiving end of this conversation: “Mineral is so expensive and consumption seems to be hit-or-miss. What will happen if I stop feeding mineral?”
Mineral consumption does indeed vary — from animal to animal as well as from one month to the next. This is often reflective of changing mineral content in forage, fortified winter supplements and the production phase of cattle (growing, lactating, gestating, etc.). These fluctuations should not deter you from making mineral an option to your cattle year-round, as other sources of mineral for grazing cattle are neither constant nor consistent.

It is also important to note that the mineral deficiencies of cattle on an otherwise-well-managed nutrition program are often relatively minor. This may be referred to as a subclinical deficiency, a deficiency that presents itself in obscure ways.
Subclinical symptoms, while not always initially obvious, usually become apparent after they’ve already impacted your bottom line. Most of these subclinical deficiencies make you scratch your head and think “Hmmm, something is a little off,” but rarely would you make the connection between a change in or a lack of mineral with the discrepancies you are observing. That is, unless you were aware of those connections existing.

Below are a few such connections that I’ve observed anecdotally, encountered in conversations with producers and verified in research.

“My Conception Rates are a Little Low this Year.”
TMost cow herds in the Southern Great Plains are currently in the midst of calving and are rapidly approaching breeding season. The mineral requirements (and nutritional requirements in general) of cows are at their peak when lactation is also at its peak, 30 to 60 days postpartum. It is critical at this time to make sure your cows are in optimal body condition and that they have all the tools on the cellular level to conceive early in the breeding season.

Some of these tools are minerals that are highly active in various reproductive processes. Selenium, zinc and manganese in particular have been found to have direct effects on reproduction in cattle, significantly affecting processes such as ovarian function, steroidal synthesis, and even testicular development and function in bulls.

It is not uncommon for an extreme mineral deficiency to result in an open cow (as in she doesn’t get bred or, just as likely, she suffers early embryonic loss following conception). However, a subclinical deficiency may yield a bred heifer or cow — but one that conceived during second or third service rather than conceiving upon first AI service or exposure to bull. This could lower pregnancy rates in a short breeding season or extend your calving season.

It is well-documented that cows and heifers that conceive early in the breeding season sustain a longer, more productive herd life. Doing what you can to ensure early conception can help boost your long-term profitability.

“I Seem to be Treating More Calves Post-Weaning than Usual.”
Many minerals have dramatic implications in the immune system and its function. Lack of optimal mineral management at the cow-calf level is speculated to be correlated to sickness later on in life — such as incidence of respiratory illness at the feedlot.

When calves are retained at the ranch and preconditioned, the consequences or benefits of nutrition earlier in their life often come to light. Adequate mineral nutrition may be just as important as, and may enhance, the viability of a vaccination program.

This is not to say that minerals are the magic bullet to end all morbidity problems, but they are an important part of the equation along with genetics, vaccination and overall management.

“My Cattle aren’t Keeping or Gaining Condition as well as they have in the Past.”
Many metabolic processes in the body are regulated or activated by minerals, including processes vital to sustain physiological systems through periods of high growth.

For example, digestibility can be driven or impeded by availability of minerals. Digestibility in ruminants is largely impacted by the state of the microbial population in the rumen, making microbes the driving force behind utilization of nutrients. Rumen microbes require a specific environment and substrates in order to thrive and survive, and the availability of certain minerals (depending on the microbe) are part of this specificity.

While you should not expect the presence or absence of a mineral supplement to behave like an ionophore or a growth implant in terms of feed efficiency or pounds of gain, a mineral supplement is a key player in the digestibility and absorption of all nutrients and their subsequent utilization in the body. While any major nutrient deficiency will likely be visibly apparent by way of body condition or average daily gain (or lack thereof), a subclinical deficiency may cost you a pound per week, which really adds up come sale time.

Most mineral supplements are formulated to be consumed at a rate of 2 to 4 ounces per head per day. If your supplement targets 4 ounces, and a cow is “off” supplement about one-third of the year (due to her needs being met through other sources), then she’s consuming about 60 pounds of mineral per year. At an estimated $35 for a 50-pound bag of loose mineral, meeting her mineral needs costs you $42 per head per year.

Though not always immediately evident, being intentional and consistent about keeping mineral in front of your cattle will benefit both your herd and your bottom line in the long run.