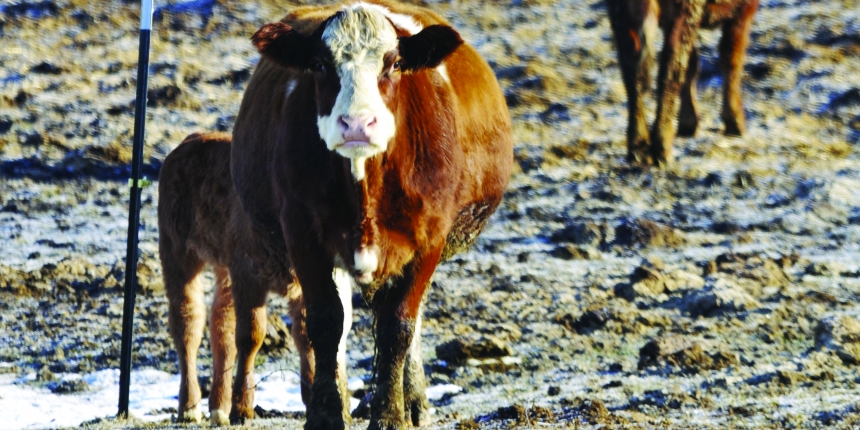 Calving is an ideal time to evaluate whether your beef cow TMR feeding program has been meeting your requirements by making some key nutritional observations.

Body condition:  Research has shown that beef cows do best when they calve in moderate body condition, neither thin nor fat.  Thin cows can be slow to calve and produce lower birthweight and less thrifty calves. They may also have inadequate reserves for sufficient colostrum production and subsequent milk production to ensure optimal calf growth and rebreeding conception rates.  Fat cows tend to have more calving difficulty due to internal fat accumulation, and lower dry matter intake after calving, which lowers milk production and subsequent calf growth rates and rebreeding conception rates.

Thus, not only is body condition at calving important, it can be used to evaluate the adequacy of the post weaning feeding program, during mid and early, late gestation.  Body condition is best noted immediately after an animal calves to remove the effect of the calf and conceptus.  In an ideal situation, a body condition score (BCS) can be given to each animal as it calves, or a BCS can be given for a group of cows with calves of a similar age, keeping the values for heifers separate from the cows.

Assisted calvings:  In addition to under and over-conditioned cows, there are other nutritional problems that may increase the incidence of assisted calvings such as milk fever, or selenium and vitamin E deficiencies.  These too may affect the strength and sustainability of uterine contractions at calving.  Noting the suspected cause and incidence of nutritionally related assisted calvings can be useful for adjusting late gestation feeding programs to prevent such problems.

Calf morbidity and illness:  Inadequate cow nutrition during late gestation can result in higher levels of calf morbidity and health problems such as respiratory disease and scours due to deficiency of specific nutrients such as selenium and vitamin E, or production of low levels or poor quality of colostrum.  Thus calf morbidity and specific illnesses can also be used to assess the adequacy of the feeding program prior to calving.  If vitamins and minerals are fed free-choice, feeding them in the TMR may ensure each animal consumes its requirement, and help minimize specific nutrient deficiencies.

Calving percentage:  Once calving is over, the distribution of birth dates, along with the number of calves born in relation to the total number of cows serviced gives insight into the effectiveness of the post-calving feeding and breeding programs.  Cow herds that meet their nutritional requirements, and that are otherwise reproductively sound, will on average have a first service conception rate of about 70%.  In this case, we should be able to expect about 70% of the calves to be born in the first 21 days of calving, 21% to be born in the next 21 days, and 6% to be born in the 3rd 21 day period etc., depending on when the bulls are removed.  Having a reduced proportion of calves born in the first “wave of calvings”, or a calving percentage below 90% over the first 60 days of calving, suggests the plane of nutrition between calving and breeding may be inadequate for optimal fertility, and may be causing either a delay in conception at first service, or a reduced overall conception rate, both of which will be costly.

Evaluate current feeding strategy:  Post-calving nutrition has the greatest effect on cow-calf profitability because of its direct effect on milk production and calf growth, and rebreeding. By evaluating calving performance this spring, one can assess the success of last year’s feeding decisions and begin making the necessary adjustments now, during the calving season, to ensure that not only will calf performance this year be optimal, but that fertility and future calf production will be assured, whatever feed resources may be available ...“Because Nutrition Matters™”.

Dr. Alan Vaage is a Ruminant Nutritionist with over 30 years of experience in the beef industry, and currently provides technical support for Jaylor Fabricating Inc., Orton, Ontario.  Dr. Vaage can be contacted by email: nutrition@jaylor.com.

In the past two issues of TMR Corner we have...

Silo-King: Protect and Enhance your Feedstuffs

There are many obstacles to overcome when putting...