Cattlemen know that protecting their cattle and operations from potential threats is essential to remaining profitable and productive. What many may not realize is just how impactful one of those threats – fly infestations – can be.

The USDA estimates that horn flies alone cost the cattle industry an estimated $1 billion each year in losses due to the stress they inflict on cattle and diseases they spread to cattle. These factors can contribute to weight loss of as much as 50 lbs. per animal*. While horn flies are the primary species of concern for cattle on pasture, other fly species have a detrimental impact to cattle in a confined setting. House flies are implicated in the transmission of more than 65 disease organisms. Face flies are also commonly found around cattle in confinement and are known to spread disease organisms while feeding around the eyes, noses and mouths of cattle.
Populations of these nuisance flies can grow quickly, and spread diseases throughout an entire herd if there isn’t a proper fly management program in place. To better control fly populations and protect against cattle diseases, it’s important to know the signs and implications of three common cattle diseases spread by flies.

1. Bovine Respiratory Disease
A recent study found that house flies may be harboring Bovine Respiratory Disease (BRD) pathogens, and potentially transmitting them to cattle1. BRD accounts for $900 million in feedlot losses annually due to reduced feed efficiency, treatment costs and animal death. BRD is also responsible for upwards of 75% of illness and 70% of all cattle deaths in feedlots2.
BRD can affect the upper or lower respiratory tracts and is often called a “disease complex” due to the multitude of factors that cause the respiratory disease. The signs of BRD in cattle may vary depending on the animal’s age, the organisms involved and the severity of disease.
The disease is commonly known as “shipping fever” as it is primarily linked to environmental stressors facing cattle including shipping, crowding and changes in diet that may cause immunosuppression and subsequent infections from various viral and bacterial pathogens. Bacteria including Mannheimia haemolytica, Pasteurella multocida, Histophilus somni and Mycoplasma bovis may exacerbate the development and progression of BRD, as transmission of these pathogens is usually attributed to direct contact between animals and contaminated substrates like drinking troughs and feed bunks. However, the new research connecting flies to the potential spread of BRD suggests that fly control on feedlots may play a greater role in BRD prevention than previously thought.
For the study, 60 house flies were collected from a commercial cattle feedlot in Kansas during a BRD outbreak to examine the link between house flies and the transmission of BRD bacterial pathogens. Using two different methods of bacterial detection, the house fly samples that were tested contained levels of the bacteria Mannheimia haemolytica, Pasteurella multocida and Histophilus somni. The presence of these bacteria indicate that house flies may serve as a potential vector for BRD within feedlots and surrounding areas. While this study is the first to document BRD pathogens in house flies collected near affected cattle, more research is still needed to determine the extent to which house flies move BRD pathogens and the rate of transmission of BRD pathogens. 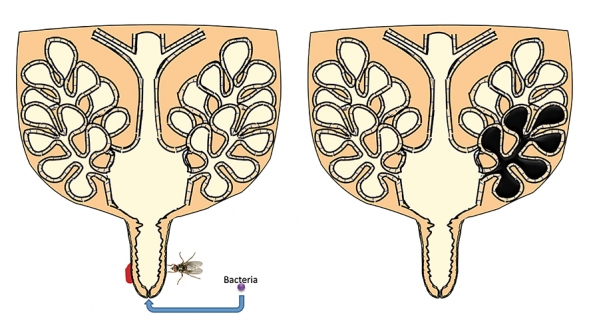 2. Beef Heifer Mastitis
While it is an often overlooked issue, beef producers also need to be observant for beef heifer mastitis, a disease that can be spread primarily through horn fly bites. Mastitis in heifers can impact an operation in multiple ways, with the decrease in future milk production being the greatest concern. Decreased milk production directly translates to lower weaning weight of calves.
Horn flies are a vector for disease and bacteria, including Staph. aureus, the primary cause of mastitis. The flies move around the teat and travel from animal to animal, carrying the bacteria along with them. Horn flies can live two to four weeks, taking up to 40 blood meals a day. Their painful bites eventually develop into scabs where the bacteria that cause mastitis can incubate. The bacteria then enter the teat and move upward into the quarter, destroying milk-producing tissue. The destruction of this tissue eventually leads to blind quarters in the udder, a significant factor in reduced milk yields. Studies show that milk yield accounts for more than 60% of the variation in calf weaning weight.
Given the impact on weaning weight from mastitis-induced blind quarters, horn flies can significantly affect an operation’s profitability. With damage from horn flies potentially responsible for losses as high as 50 lbs. per animal, the cost can reach as high as $45* per head in a season with an assumed value of $.90 per pound. Controlling horn flies is crucial to protecting the health of all mature cattle in the herd, but it might be of greatest importance for the replacement heifers that represent the future profitability and production on a beef operation.

3. Pinkeye
Pinkeye is a painful, debilitating condition that can cause significant reductions in cattle performance and value. Pinkeye is a bacterial infection of the eye that causes inflammation and, in severe cases, temporary or permanent blindness.
Pinkeye is caused by the bacterium Moraxella bovis, which infects the eye and produces a toxin. Face flies feed on secretions around the eyes, nose and mouth of cattle. Unlike horn flies that spend most of their time on the host animal, face flies actually spend very little time on cattle. When face flies do land on cattle, they don’t stay for long – just long enough to feed on eye secretions before moving on to their next host. Due to this process, infections can spread quickly throughout a herd, especially during the summer when flies are most prevalent.
Proper manure management can go a long way in the fight against pinkeye on a cattle operation. In addition to the use of a feed-through fly control solution, it is important that operations practice proper manure management. Manure is the primary food source and breeding site for face flies, so manure management must be consistent and timely within an integrated pest management (IPM) program. Other cultural best practices include keeping grasses and weeds cut low around feeders, pastures and manure piles to remove places disease-causing flies could rest. 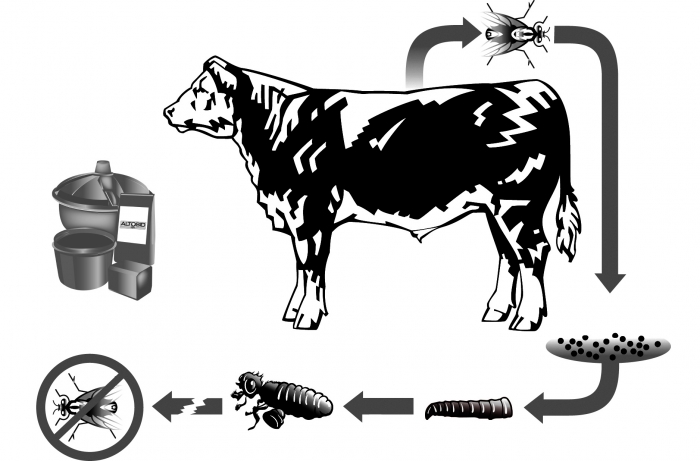 Breaking the Fly Life Cycle
For cattle on pasture, the horn fly is the insect of greatest concern. Understanding effective horn-fly control begins with understanding its life cycle. Female horn flies that have been biting and taking their blood meals, moving from animal to animal and spreading disease, eventually leave the animals to lay their eggs in fresh manure. One to two days later, the eggs hatch into larvae; then after three to five days the larvae pupate. In untreated manure, pupae will molt into adults six to eight days after that, becoming the next generation of biting horn flies.
Disrupting this life cycle is an essential component of any effort designed to control horn flies. This is true for many insects, as first discovered by the founders of Central Life Sciences who developed insect growth regulator (IGR) technology more than 45 years ago. Central Life Sciences continues to advance this technology today through its product solutions, including Altosid® IGR, a product designed specifically to break the horn-fly life cycle. Altosid® IGR is administered as a feed-through solution, passing through the animal and into the manure, where horn flies lay their eggs. It breaks the horn fly life cycle, preventing pupae from developing into biting adult flies.
For cattle in a confinement setting, producers will need a more versatile solution to control the multiple fly species that pose an infestation threat. ClariFly® Larvicide is a feed additive that prevents house, face, stable and horn flies from developing in and emerging from the manure of cattle. When fed correctly, ClariFly® Larvicide decreases the development of flies in the manure of animals treated with ClariFly® Larvicide by as much as 96.7%*.

Control Flies and Prevent Cattle Diseases
For the most effective control of flies on cattle, operators should implement a comprehensive IPM program built around the use of a feed-through fly-control solution as the foundation. For cattle on pasture, Altosid® IGR has delivered horn-fly specific control with no known cases of resistance since it was introduced in 1975 as the first feed-through fly-control solution to receive EPA approval. For cattle in confinement, ClariFly® Larvicide offers effective control of all four fly species that can potentially pose a threat. To learn more about how to keep your cattle healthy and profitable with effective fly control, visit www.altosidigr.com or www.centralflycontrol.com.