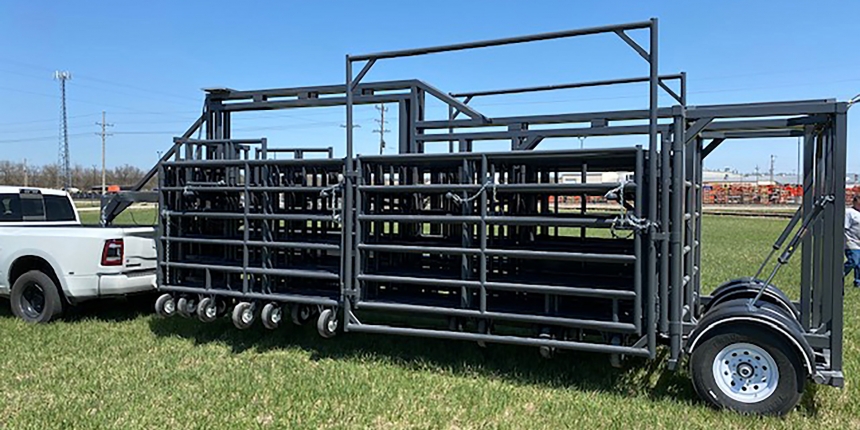 For over 20 years Rawhide Portable Corrals has become a leader in corral design and manufacturing. And while John McDonald and his wife Mary recently took time to celebrate their 20-year history of hard work and subsequent success with employees, family and customers from across the globe, John didn’t rest for long before introducing the company’s newest product, the Rancho Deluxe Corral.

When John initially developed the first portable hydraulic corral on wheels in 2002, the original product boasted multiple pens and 200-head capacity. Through the years, John continued to modify and improve his original design of the Rawhide Portable Corral in order to meet the needs of end users. The result has been multiple corral options and product features that offer a simple, streamlined experience for the farmer or rancher.

The Rawhide Original features two sizes, (the standard which is ideal for 40 to 50 cow/calf pairs and the large version for 80 to 100 cow/calf pairs) and is a basic catch-pen model. This system still boasts fast, 10-minute labor—free set ups, a hydraulic jack, self-contained power unit and battery with a solar panel, and the ability for the entire system to be driven through with a bale or cube feeder.

The company also offers the advanced Rawhide Processor model, which is available in multiple sizes as well as optional features to accommodate a wide range of corral needs. These advancements to the corral include a head gate, hydraulic adjustable alley, and loading chute.

Both of these systems are ideal for producers who are handling up to 400 head of cattle. But what about larger ranches that may have double or triple that number of animals to manage?

“All these years that I’ve done this, we’ve pretty much stuck to the same sizes of corral,” McDonald says. “But I’ve always had folks approach me at trade shows and other gatherings and say, ‘Your corrals are great, but they just aren’t big enough for our needs.’ We have many folks from large areas in Montana, Canada, and elsewhere that work on large ranches. They might ship 800 or 900 head of cattle and our portable corrals simply wouldn’t work for them.”

So, after two decades of modifying his standard size corrals, John began entertaining the idea of developing a larger corral system that would offer the unique Rawhide portable corral design to large-scale ranches.

“What I’ve actually done is revisit the original corral design that I initially came up with, which now includes a permanent alley that is needed to actually work the cattle. But that alley takes away a lot of room, so it’s not ideal for expansive herds,” McDonald says. “So, I have now beefed up the frame quite a bit more and eliminated the large alley, but the product features multiple plans to sort larger numbers of cattle without the typical narrow alley found in the Processor corral.”

In fact, the new Rancho Deluxe Corral boasts over twice the capacity of the extra-large Rawhide Portable Corral that the company has been selling for years.

In addition to modifying the alley and sorting capabilities of the Rancho Deluxe Corral, McDonald has also modified the rack system as well as the wheel construction with patent pending design to handle the weight and size of this large product. The good news? The Rancho Deluxe Corral is available in three sizes, yet still features the ease and efficiency that the Rawhide Portable Corrals have become known for.

“While the size has increased, there is only a small increase in weight,” McDonald says. “This is still something that you can pull with the same pickup truck that you could pull the regular Rawhide corral with. The difference is that I did make the Rancho Deluxe a dual wheel situation.”

Over the years, McDonald has enhanced the mechanization of the Rawhide Portable Corral while also paying close attention to the longevity and durability of the materials being used. The same can be said for the design of the Rancho Deluxe, which features the same 13-gauge material and durable plastic fenders, that end users have come to admire.

And for both the Rawhide Portable Corral and the new Rancho Deluxe, McDonald and his team work with each customer to understand how they plan on using the corral – to sort, load, pre-wean, vaccinate, etc. – to determine the best size and subsequent system components that will streamline the corral’s functionality and versatility specifically for their ranch or farm.

Looking Ahead
As the popularity of Rawhide’s new Rancho Deluxe model grows and catches the attention of large-scale ranches both near and far, John, Mary and the entire team at Rawhide have received accolades aplenty from customers near and far as they celebrate their twentieth year in business.

“It’s amazing that it’s been 20 years,” John says. “And we couldn’t have done it without all of our customers. We’ve received so many great testimonials over the years and I really wanted to hear from my customers. So, as part of our 20th anniversary celebration, we reached out to our customers and we received a huge response. Many people sent testimonials or videos of why they liked the corral, how it works for them, and how they’re using it. So many customers are very passionate about their corrals and how it has changed their operations.”

McDonald prides himself on his strong bond with his customers so he decided to select several customer testimonial videos that really touched him the most – videos that illustrated how customers are using their Rawhide Portable Corral in the way that McDonald had envisioned it to be used and how it would be the most helpful to their operations.

“After selecting five or six videos, I put those customers’ names into a hat, and the one chosen won a brand-new corral,” McDonald says.

And while introducing his latest Rancho Deluxe Corral on the cusp of this company’s 20th anniversary warrants a celebration of its own, McDonald is still hard at work envisioning new products and new ways to help farmers and ranchers streamline their operations.

“I’m always trying to keep things fresh and new,” McDonald says. “I’ve learned a lot during the last 20 years, when I developed Rawhide and started tinkering with it. I was in my mid-to-late 30s when I started building these for resale. Now I’m 58 years and I’ve learned quite a bit since then and I continue to learn from our customers. I listen to the farmers and ranchers that I talk to and I can’t wait to go back to the shop and try new things. I continually progress to make our products even better.”