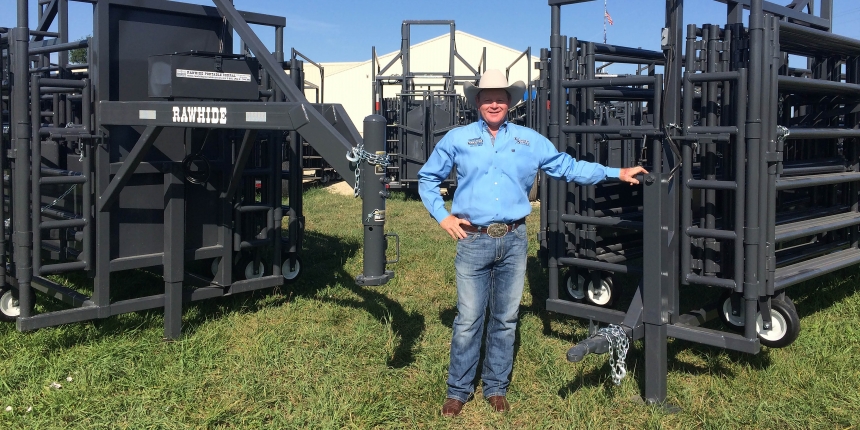 Being in business for 20 years is quite the achievement for companies in any industry. But for companies within the cattle and ranching industry, reaching the 20-year milestone is part art, part science and requires a tremendous amount of hard work. Rawhide Portable Corrals is not only celebrating its 20th anniversary, but it is also acknowledging the significant impact the company has made on the industry as a whole.

In 2002, John McDonald, founder of Rawhide, developed the first portable hydraulic corral on wheels with multiple pens and 200-head capacity. While this initial innovation was the result of McDonald’s goal to improve his own handling of livestock using portable panels, McDonald’s portable corral invention captured the attention of many producers throughout the industry. And for two decades has he has continued to modify, improve and advance his original design –– offering multiple corral options and additional unique product features that have earned the company a solid reputation in the industry.

When McDonald first brought his vision for a portable hydraulic corral to fruition, there was only one similar product on the market. So, McDonald honed his initial design to have standout features that incorporated insights from others in the industry. And that continuous improvement has been at the forefront of the company since its inception. Throughout the years McDonald has embraced the continuous improvement process to refine this Rawhide Portable Corral into a refined product that others have come to expect.

“When I first developed my product 20 years ago, there was just one portable corral on wheels that existed, and I didn’t even know about it when I initially developed my idea,” McDonald says. “When I first tried to sell it to folks, they were somewhat apprehensive about it. But I did have some interest from a gentleman, who was one of the first guys to manufacture gooseneck trailers. He was interested in buying me out because he was able to see what the future of Rawhide portable corrals could possibly be.” While visiting with McDonald in his original manufacturing plant, which was a simple two-car garage, the gentleman predicted that, just like how the gooseneck trailer came to be so popular among cattlemen, anybody in the cattle business who has cattle in multiple pastures, was going to feel like they needed to have a Rawhide Portable Corral.”

And his prediction came to fruition as thousands of ranchers and cattlemen globally have turned to Rawhide because of its simplicity, ease of use and profound impact on their operations.

“That’s one of the things I’m most proud of because I made a big impact with my design in  the way it works,” McDonald says. “It changed the industry. And I like the fact that I not only changed the cattle industry, but that I also have helped people along the way.”

Indeed, when McDonald originally began introducing his product idea to potential customers, he stressed the corral’s portability and ease of handling, as well as how it’s easier on your body, and easier on your cattle.

“I wanted my design to make it safer and easier to handle the cattle and I did all that with only 20 head of cattle. But here I am 20 years later and I own a 2400-acre ranch on which I have 240 cows. Now I actually take the corrals out and do the things that I was telling customers that I knew was possible with a larger herd – all by myself. The other day I realized that I’m 58 years old and using these portable corrals I just caught 50 cows in a particular pasture. I sorted off the five I needed to doctor and it only took me 10 to 15 minutes. That’s exactly what I wanted to do for people – make it easier to do their jobs. I love that for the past 20 years I’ve helped all of these rural folks with this product. I’m just trying to make things a little easier.”

And even 20 years later, when McDonald is visiting with customers at some of the industry’s larger trade shows, he receives complements and accolades from customers who are still using the same Rawhide Portable Corrals they bought several years ago.

“Many customers stop and thank me for providing a product that has really helped them out,” McDonald says. “They say that if it wasn’t for my portable corral, they would no longer be in the cattle industry.”

Continuous Improvement
Today John and his wife, Mary, continue to offer a series of exceptional corral products that industry members have come to rely upon. Specifically, Rawhide Portable Corral customers can choose from a series of different models. The Rawhide Original features two sizes, (the standard which is ideal for 40 to 50 cow/calf pairs and the large version for 80 to 100 cow/calf pairs) and is a basic catch-pen model. This system boasts fast, 10-minute labor—free set ups, a hydraulic jack, self-contained power unit and battery with a solar panel, and the ability for the entire system to be driven through with a bale or cube feeder.

The company’s advanced Rawhide Processor model has become the most popular corral that the company makes. Available in multiple sizes and various features, including a head gate, hydraulic adjustable alley, and loading chute, the Rawhide Processor can accommodate a wide range of corral needs.

And during the company’s 20-year history, not only has McDonald honed in on continually improving the mechanisms and engineering of his hydraulic corral, but he’s also recognized the important role quality materials play in the functionality and longevity of the corrals. That’s why Rawhide uses 13-gauge material for all of the panels and ¼ and 3/16 square tubing to ensure the equipment can handle the activity of moving cattle.

Thanks to the durability of materials and the ease of use on the part of the operator, the popularity of Rawhide’s hydraulic portable corral has continued to grow for the past two decades, allowing the company to meet the needs of producers far and wide, including across the entire U.S. as well as Canada and even overseas.

“Every year for 20 years I’ve been a little behind on orders and it’s bothered me, but at the same time, I’ve been proud of that,” McDonald says. “I’m always busy. And another thing that has happened is that I continually improve the product, which means that folks often trade or upgrade. Thankfully, because I overbuild my product and ensure it’s going to last, some customers sell their older models online where the corrals bring high prices. Just the other day a  rancher that bought a Rawhide corral in the early 2000s for $7000, sold it online for $18,000. It was in great condition. It looked good and was still doing its job. I’m proud of that. I’m proud of the fact that happens with my products.”

To help producers identify the best Rawhide Portable Corral to fit their needs, the Rawhide team works closely with each customer to learn about their particular ranching or farming situation. This involves identifying the ideal size required and how they plan on using the hydraulic corral. For some customers, this may involve using it to pre-wean, castrate, or vaccinate their livestock. For others, the corral may only be used to sort, load and transport the herd. Whatever the end uses, McDonald and his team work hard to offer options resulting in a versatile unit that meets each producer’s specific need.

In addition, McDonald continually evaluates the safety aspects of his product design – making the product so that if a human being grabs it at any location inside or outside the corral, they are not going to hurt themselves.

“Because I’m always looking out for the animal’s safety and well-being, and knowing the animals are in the pasture with the corrals, with my fender idea, I put a hard plastic fender on it so that if an animal bumps into it they aren’t going to hurt themselves,” McDonald says. “I’m just always looking out for the animals and the humans interacting with my products. It’s just part of my focus on making the best products for my customers.”

And while the last 20 years have been an exciting adventure for McDonald and his team, the future continues to look bright. In fact, as far as what the next 20 years may hold for Rawhide Portable Corrals, McDonald points out that he always has “things in the works.”

“Years ago I started exploring the idea of a hydraulic squeeze chute and some other things that have never been done in the industry and that will significantly change the industry,” McDonald says. “But I tabled those ideas as things evolved in the company. Now that time has moved on, I’m going to revisit some of those ideas and develop products for folks, other than the portable corral. I’ve got some things on the burner that I’m very excited about and that I believe will continue to help others in the industry. I’ve been imitated, but I will never be duplicated.”