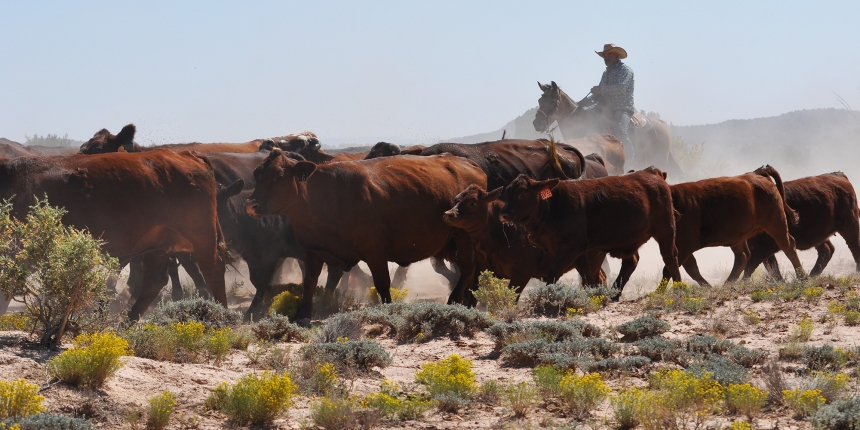 The late Dr. Roland Sanchez had a vision. It was his dream to build a herd of Santa Gertrudis in the harsh climate of the high desert of New Mexico. Red Doc Farm headquarters is in the Rio Grande Valley in the central part of the state, an area where he and his wife Elia could trace their family ancestry to the first Spanish settlement in 1598. Little did he know that his ranch would become internationally known as a source for top quality genetics and the highest averaging seedstock producer in New Mexico.

It began while still a high school student in the 1960’s when he saw Santa Gertrudis cattle at the New Mexico State Fair. The cattle came from the famed Forked Lightning Ranch of Pecos, New Mexico, owned by Texas oil producer Col. Elijah Edwin “Buddy” Fogelson and his wife, Greer Garson, a Hollywood screen icon. After becoming one of the first Hispanics to graduate from medical school at the University of New Mexico and working as a resident in a Fort Worth hospital, Dr. Sanchez’s interest in the breed was reignited late one evening while browsing a cattle magazine left in the emergency room. It was at that moment that he began to put into place his plan that he had been dreaming of for many years. 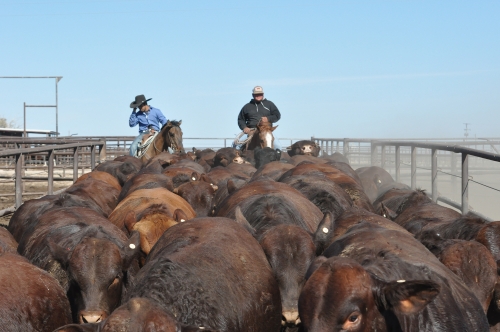 Along with his wife, Elia, Roland established a small herd of Santa Gertrudis on their farm that came to be known as Red Doc, after Roland’s flaming red hair. While establishing the herd, Roland and Elia also raised a family that would grow to include two daughters and four sons who all at an early age, became involved in the daily operation of the farm. And while rearing a family and growing a ranch, Roland maintained a medical practice in nearby Belen.

The goal of Dr. Sanchez was to establish the Santa Gertrudis as a hearty breed that could withstand the harsh conditions of the high desert, an area that receives on average, 8 inches of rain each year. A believer in taking a scientific approach to the operation, Roland had no preconceived notions about what he was doing. Knowing what he didn’t know, he relied on the expertise of others in order to implement production mechanisms that would result in cost effective strategies for growing the herd and maximizing profit.

Raising cattle in the ranchland of New Mexico is a brutal proposition. Grazing in high desert on grama grass, Indian rye grass, and buck grass, Roland wanted to create a herd in which fertile cows could maintain their condition and be profitable. Low inputs and rapid gainers was the intended goal of the Red Doc Santa Gertrudis. In order to further sustainability and growth, Red Doc began an intensive program of cross breeding the bos indicus traits of a Santa Gertrudis with other breeds. The results were profound. The introduction of bos indicus genetics from Santa Gertrudis to other breeds resulted in an animal in which less feed was needed, had better adaptability to cold temperatures, and a greater survival rate. Simply put, cross breeding resulted in more pounds on the ground while thriving in the relatively arid environs.

Red Doc Farm has taken their rugged naturally adapted Santa Gertrudis genetics and intense carcass selections to develop their own high marbling, heat tolerant, performance seedstock.  They have worked with the Josserand Family from Hereford Feedyard and the West Texas A&M beef research program and now consistently grade choice between ninety-two to one hundred percent choice with an average yield grade of 2-3 on their purebred Santa Gertrudis steers. 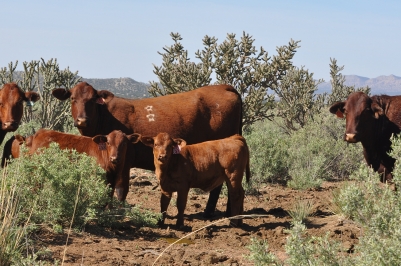 As the operation grew and the herd expanded, interest in the Red Doc Santa Gertrudis increased. Challenges facing ranchers in the intermountain west led to the desire to introduce a hearty animal that could adapt to increasingly dry conditions brought on by a twenty year drought. Yet skepticism regarding bos indicus genetics abounded. An extensive study by Utah State University, however, quickly began to dispel those notions. At the inception of the study, there were some doubts. Producers had concerns about their cattle becoming too large, being culled too early, and not being compatible with their production environments, (Garcia, 2020). Comparing calves sired by Angus and Santa Gertrudis, the three year study discovered that progeny of the Santa Gertrudis had similar birth weights and a greater survival rate. Year three of the study utilized a Red Doc bull. The herd was evenly split into 80 cows to be covered by the Santa Gertrudis bulls and 80 cows to be covered by the Angus bulls. This portion of the project was conducted with live bulls for two reasons; first was to increase the numbers of F1 Santa Gertrudis calves in the Utah State University herd, and secondly, to test how Santa Gertrudis bulls would perform during a breeding season in the northern intermountain west. The Santa Gertrudis bulls did not disappoint in their ability to cover their cows and a good portion of the cows that were assigned to the Angus bulls. As a result, Utah State University will be parentage testing all calves in the upcoming calving season to determine the true number of Santa Gertrudis sired calves from this previous breeding season. Steer calves will enter the feedlot and carcass data collected at the end of the finishing period, (Garcia, 2020). Projects ranging from nutrition, mineral supplementation, carcass quality, grazing behavior and epigenetics have been initiated utilizing the F1 Santa Gertrudis calves. Furthermore, Utah State University is currently working to establish a purebred seedstock herd to further research endeavors and potentially provide an opportunity for more Utah producers to incorporate Santa Gertrudis genetics into their herds. The results of the USU Heterosis project were profound as calves weaned to the Angus based cow herd in Logan, UT had adjusted weaning weights were 549 pounds for Santa Gertrudis sired calves and 499 pounds for the Angus-sired calves.

Red Doc Farm has grown from a forty five-acre farm to an operation that encompasses 50,000. The family is quick to note that this growth was the result of hard work, investment, and commitment to the development of the Santa Gertrudis breed. Furthermore, Red Doc Farm is committed to maximizing efficiency by diversifying utilization of the land to capture all markets. Feed production is internal and the farm also raises alfalfa, sweet corn, melons, and pinto beans. Implementing the GrowSafe System allows for increased efficiency and profitability by measuring feed efficiency for each animal individually.

The greatest market for Red Doc products are its bulls. Each year, Red Doc Farm conducts a bull sale that attracts buyers from an increasingly diverse geographical range. What is unique about the sale is that every aspect is operated by the Sanchez family. This year, the sale will be conducted on Friday, April 9th and Saturday, April 10th. Friday will see dinner being served at 6:00 PM along with live entertainment. Following dinner will be the elite cut female sale. On Saturday, cattle viewing will begin at 9:00 AM with lunch being served at 11:30 with the Red Hot Bull Sale and the Rocky Mountain Spring Runoff Sale beginning at 1:00 PM. 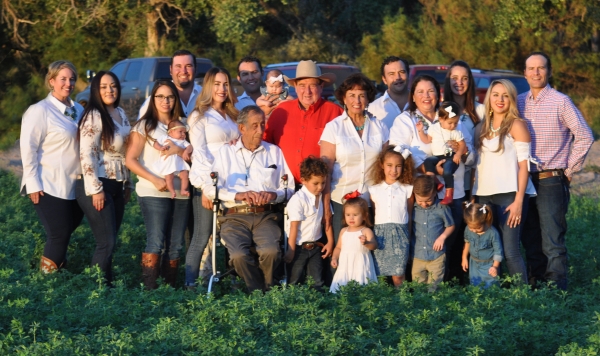 But the story of Red Doc Farm is not in the success of its commitment to the Santa Gertrudis. It is the story of Dr. Roland Sanchez’s vision of creating a ranch that would be family owned and operated for perpetuity. Roland and Elia raised six children and instilled in them the ideals of hard work, determination, and grit in a harsh terrain. Like the thriving breed that finds its home on the high desert oasis of Bosque, the children of Roland and Elia have as well. Instilling the concept that “education is freedom.” Dr. Roland Sanchez was the first college graduate in his family and instilled in his children the importance not only of education, but of service. The Sanchez children were all involved in every aspect of the Red Doc operation from an early age while also becoming active leaders in school and civic activities such as FFA as well. 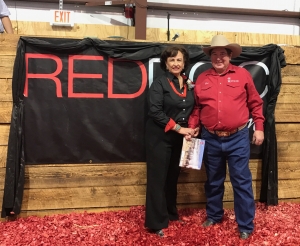 Following the example of their parents, each child continued their individual educational journeys which are nothing short of remarkable. Dr. Adolfo Sanchez followed in the footsteps of his father graduating from medical school and maintaining a practice in nearby Belen; Dr. Florian is a veterinarian who specializes in orthopedics; Alicia Sanchez operates a multi-state insurance agency; Dr. Roland “Scooter” Sanchez II, pursued dentistry and also practices locally; the youngest, Emilio, an Animal Science graduate of Texas Tech, is the General Manager of Red Doc Farm. Tragically, oldest sister, Dr. Jessica Sanchez, succumbed to Covid-19 last fall after utilizing her medical skills as a spiritual faith healer.

All members of the Sanchez family operate Red Doc Farm, even with their commitments to their own individual professional endeavors. Rooted deep in the traditions of the Rio Grande Valley of New Mexico, where as Elia described, “Old world meets new,” resides a family who embodies the American ideals of hard work, commitment, community, and love of family. The vision established by the late Dr. Roland Sanchez is a living testament to the virtues of faith, duty, resiliency, and love of family.