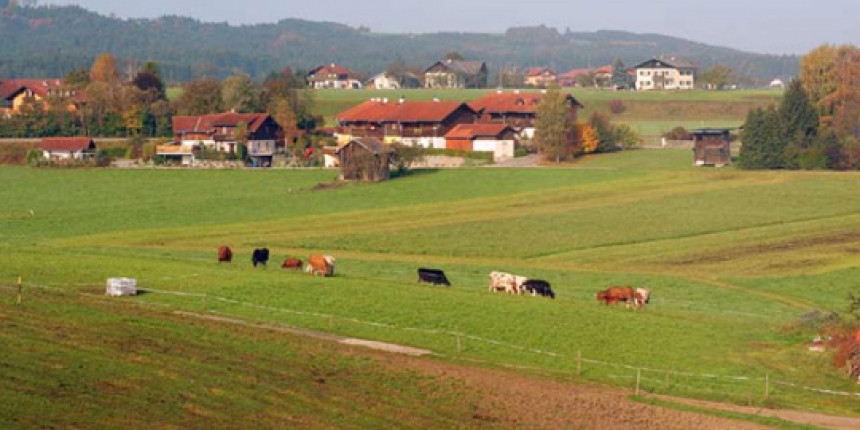 The amount of land in production agriculture declines every year. In the 2007 Ag Census, USDA estimated there were 922 million acres of land in farms, a decline of more than 16 million acres in just five years. The loss has been consistent; 25 years ago, there were nearly 987 million acres in farms in the U.S. Much of that land is developed, as a steadily growing American population needs more room and the cities and their suburbs slowly radiate out into the country. There’s been something of a slowdown over the last couple of years, as the recession has put a damper on new home construction.

That was reflected in the National Agricultural Statistics Service’s latest annual report on agricultural land values, which recorded a 3.2% decline—the first year-over-year decline in land values in 21 years. “The contraction in the overall economy has caused less commercial and residential development in many regions… A decrease in the demand for recreational land has also contributed to the overall decrease in land values,” NASS reported. Less commercial and residential development, though, does not mean it has stopped, nor will it. Rick Krause, senior director of congressional relations for the American Farm Bureau Federation, says, “That pressure’s always going to be there in some way, shape or form; I don’t think it’s an issue that’s going to go away.” And that could well mean some day soon, a rancher might have Joe and

Jane Townfolk right on the edge of the pasture. What if the new neighbors decide they don’t care for the sounds and smells of farm country? In most cases, it’s the neighbors who will have to adjust. “Most of the states,” says Krause, “—and again, it is a state issue for the most part, and governed by state law—have what they call ‘Right to Farm’ laws, which means essentially that farmers who were there first have the right to continue operating, and essentially takes away the right of people moving into the area to complain about noises and odors that were there before they came.” If you were faced with that situation, it would be wise to learn just what the laws are in your state or county. In some cases, the law stipulates that as long as the farmer or rancher is doing what he’s always done and hasn’t changed, he’s protected. If, on the other hand, he wants to move into a new enterprise—say, he puts up a swine confinement building—or if he dramatically expands his operation, the law may no longer be on his side. Neighbors do sometimes take producers to court; if the local Right to Farm law is well written, the farmer or rancher will typically prevail. “

Basically, the idea is that people should know what they’re getting themselves into when they move out there,” says Krause, “and they can’t complain about what’s out there when they come.” But legislators are sometimes overzealous in crafting laws to protect production agriculture, and the law itself may not stand up to scrutiny. That happened in 1998, when the Iowa Supreme Court struck down that state’s Right to Farm law, ruling it to be an unconstitutional taking of the neighbor’s property. “Taking” usually, means actual seizure of the property by the government, or denial of its use; the Iowa high court ruled the state law had prevented a farm’s neighbor from initiating action to block nuisances that would impede the neighbor’s enjoyment of his own property. A year later, the U.S. Supreme Court upheld the ruling. “The general rule of law,” says Krause, “is that you cannot disturb use and enjoyment of a neighbor’s property.” Common law provides a couple of definitions that the neighbor can use in court; in addition to nuisances, there are also trespasses.

“For example,” he says, “if you were to put something in the water that might have somehow flowed onto your neighbor’s property, that deposition of the water could be construed as a trespass because of encroaching on somebody else’s property physically.” The court may also be called upon to judge whether a farming or ranching action is a “public nuisance,” in that it is obnoxious to everybody in the vicinity; this would not be protected under a Right to Farm law. “A lot of it, I think, just has to do with common sense, and being a good neighbor,” says Krause. “That’s the best way to resolve any issues, and try to resolve them before they happen. From a farmer’s standpoint, he can let people know how his operation works and what’s involved, and some of the odors or noises that people can expect.” If a neighbor has special needs—for instance, particular sensitivity to noise or allergens—it’s best that the producer find that out and do whatever is feasible to accommodate it. Some ranchers make a point of hosting picnics and barbecues, creating a friendlier atmosphere. “ Getting to know your neighbors certainly helps,” says Krause. “I’d recommend it for people moving into an agricultural area that are not involved in agriculture.” But a farmer or rancher also has to recognize when surrounding development has reached the point where it’s no longer practical to maintain an agricultural operation. Krause points out that in many situations it can be profitable to sell out; the land may be worth far more for commercial or residential development than it is to keep farming on it.

“But by the same token,” he adds, “in some cases that land can be just as valuable as open space as it would be for development. The more you get people moving in and around an operation, the more valuable the land becomes for competing interests.” A city, for example, or a private developer, may want to turn the land into a park for nearby residents to share. In some cases, too, a government or a private trust may want to pay you to continue farming. A number of states and counties have developed farmland easement programs, designed to keep land in production and to curb urban sprawl. The American Farmland Trust says 1.1 million acres nationwide have been enrolled in easements over the last 25 years; producers have received $2.3 billion in compensation for their agreement to keep the land in agriculture in perpetuity. It’s a double-edged sword; if you change your mind and decide to get out of farming, you’d only be able to sell the land to someone who also plans to use it for agriculture. That makes it worth less than it would be for development; the easement transfers along with the deed. Krause says some areas have also adopted agricultural zoning laws that impose lower property taxes in exchange for keeping the land in agriculture; again, there’s a financial incentive, but the land is locked into farm production unless the law is changed.

“These are all things that are designed to prevent urban sprawl,” Krause concludes, “and also designed to keep some open space in areas. And open space, in many cases, is a very desirable attribute for communities, and can be very attractive. Many communities want to keep as much open space as they can, and one way to do that is to keep farms in operation.”