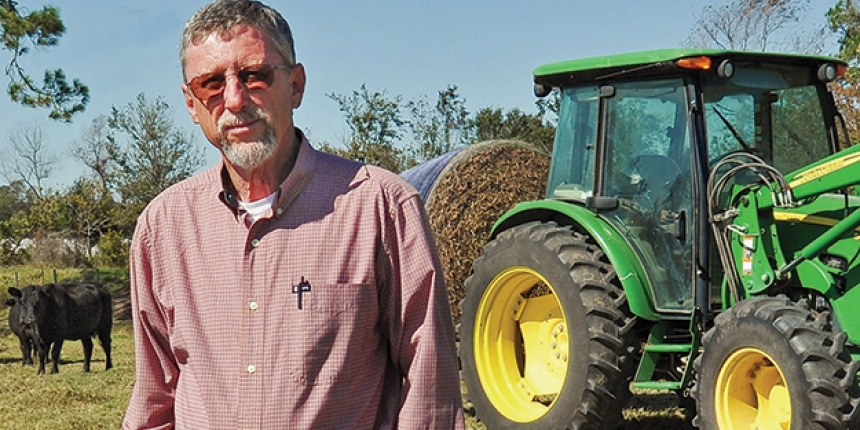 Store round bales outdoors, through the winter, and you’ll likely get hit with a hefty “fine.” According to research from Oklahoma State University, round bales can lose between 5 and 20 percent of their dry matter just by sitting outside through winter. Ouch! And those dry-matter losses increase even more if the bale sits outside for a full year or more.

Losing 20 percent is like tossing every fifth bale you make into a manure pile. But those losses are not really all that surprising when you consider that 20 percent of the dry-matter in a 6-foot diameter bale is in the outer four inches of the bale.

There are ways to limit these quality losses — indoor storage, which is expensive; and plastic wrappers, which take time to apply, and tend to trap mold-producing condensation.

But now there is a new way to wrap round bales that promises better protection of bale quality. The product is B-Wrap, jointly developed by the John Deere baler factory in Ottumwa, Iowa, and Tama, the Israeli company that manufactures netwrap for John Deere, and other companies worldwide.

John Deere B-Wrap replaces the netwrap in your baler. Baling with B-Wrap is basically the same as baling with net. The big difference is that B-Wrap includes Tama Structured Composite Material (Tama SCM™). This material sheds rain, snow, and helps limit damage caused by ground moisture. Plus the Tama SCM has millions of tiny microscopic pores that let water vapor, inside the bale, escape.
These microscopic pores are crucial to B-Wrap’s performance.

“Round bales typically sweat after they are made, plus they absorb moisture during times of high humidity,” says Ron Amos, director of market development for Ambraco, the Dubuque, Iowa based company that distributes B-Wrap to John Deere dealers. “The Tama SCM lets that water vapor escape the bale. That’s why B-Wrap preserves bale quality much better than plastic wrap.”

Another advantage of B-Wrap over plastic wrap is labor, says Zach Reiter, of Z & J Farms, Cascade, Iowa. They typically plastic wrapped some corn stover bales to hold over the winter. “But considering the cost of shrink wrapping, and the time associated with doing it,” says Reiter, “B-Wrap is much more conducive. We have better quality bales, they last longer, and it’s a lot faster to do.”

So will the day come when B-Wrap replaces net in most round balers? “No,” says Ambraco’s Ron Amos.
“We see growers switching back and forth between net and B-Wrap,” says Amos, “depending the crop, storage plans, and when the bale will be used. B-Wrap costs several dollars more per bale than traditional netwrap. For bales that will be used within several months, netwrap remains the most economical solution.

“But for those bales that will be stored outdoors, through the winter,” continues Amos, “B-Wrap is the better choice because it preserves hay quality much better than net.”

“After a year stored outside,” says McGrory, “you open up a B-Wrap bale and it’s just like the day we baled it. At the hay auction there was a lot of interest, and our B-wrap bales were the highest-priced hay sold that day.”

What does it take to start using B-Wrap?
“B-Wrap will work on most John Deere 7-, 8-, and 9-Series Round Balers that are equipped for netwrap,” says Amos. “All that’s needed is a simple, dealer-installed B-Wrap kit. Once your baler has that kit, you can switch between net and B-Wrap in less than five minutes.”

Amos, who has been testing B-Wrap on a variety of different crops, sees its application beyond hay.
“Certainly much of the interest in B-Wrap has come from hay growers,” he notes, “but we are also seeing success with straw, corn stover, and peanut hay. In fact we’ve had a lot of interest from companies looking to make ethanol from corn stover and other crop residue.”

B-Wrap was introduced with limited availability in 2013. It promptly sold out. For the 2014 baling season, B-Wrap should be widely available through John Deere dealers.

“With row crops replacing hay fields in many areas,” notes Amos, “high quality hay is in short supply. It just makes no sense to make high quality round bales and then let Mother Nature dramatically degrade that quality. I think that’s why we’ve had so much interest in B-Wrap. It can limit Mother Nature’s damage, and preserve more of the quality you put into your bales.”

Over the past several years, extensive testing of B-Wrap has taken place on U.S. farms. Here’s what some of those early users of B-Wrap have to say about the product:

On the regular netwrap bales held over winter, we’ll often see 6 inches of spoilage on the bottom of the bale. Our B-Wrap bales, stored in the same row, have none. And when we unroll a B-Wrap bale, the hay looks green right off the bat.
John Woodcock, Macon, Missouri

Our cattle will go and eat hay from a B-Wrap bale before they eat a net-wrapped bale, even though the hay came from the same field, baled the same day. And for bales covered in snow or ice, the B-Wrap comes off so much easier than net.
Darron Schoen, Freistatt, Missouri

We have been wrapping our peanut hay bales in white plastic with an in-line wrapper. After a few months, where the moisture condenses on the white plastic, you’ll get maybe three inches of green algae all around the bale. With B-Wrap there’s none of that waste. You open a B-Wrap bale and it looks like it had just been rolled. And with B-Wrap there are no extra steps. The baler puts the B-Wrap on and you just store the bale in a row.
Alton Exum, Nashville, Georgia

We used B-Wrap to bale about 150 corn stalk bales, with the intention of letting them sit a year and then using them early the next fall. In the summer we checked the bales and were shocked at how good they looked. So as an experiment we left some sit for another year. When we took the B-Wrap off, after two years of sitting there, they looked the same as maybe a month after being baled.
Zach Reiter, Cascade Iowa

We are starting to use more straw in our dairy ration. By using B-Wrap instead of net, we probably went from a 15 percent loss to a 2 or 3 percent loss. Even after a winter outside, we have nice and clean straw, just like the day we baled it.
Steve Harre, Nashville, Illinois