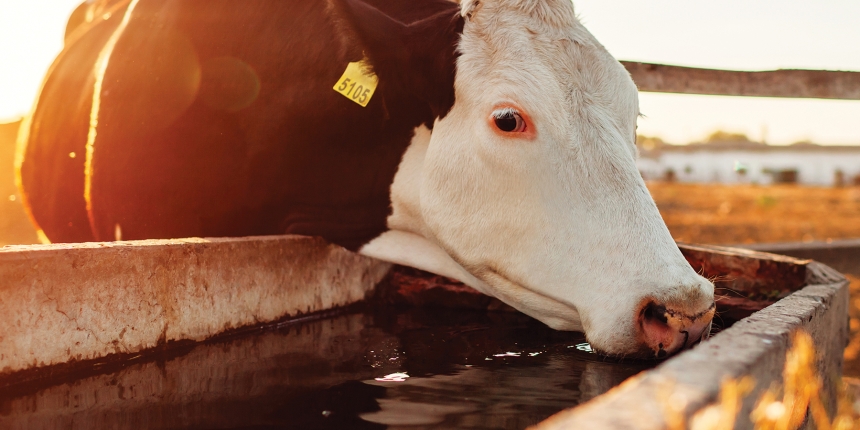 Dr. Don Spiers, Professor Emeritus, Division of Animal Science at University of Missouri has worked with dairy and beef cattle for many years, looking at heat stress.  He says large animals and fat animals have more trouble dissipating heat than smaller, leaner animals, so heat stress is often more of a problem in feedlots than in pastured cattle or young animals.  Dark colored animals and those with the most insulation (body fat) have the most problem with heat.

He says that the most helpful thing you can do for cattle in hot weather is provide shade, and plenty of fresh, clean, cool water.  It has to be lower than 800 F. so it can’t be sitting out in the sun getting hot or cattle won’t drink it.  “You need to shade not only the animals but also the water they will be drinking.  If it’s cool, they’ll drink it and this will help cool them.  They need at least 2 gallons per 100 pounds of body weight, per day.  This amount will increase even more if it’s really hot,” says Spiers.

It’s also important to reduce biting flies. Cattle expend energy trying to get rid of flies (slinging their heads over their back, etc.) which creates body heat, and they also tend to bunch up when fighting flies.  “If they bunch up, they don’t get much air flow over and around the body, and suffer more heat stress,” he says.

“One of the problems in a feedlot is bare ground.  We’ve measured temperature of animals on plain earth versus grass.  Open ground, in the same environment, heats up more, and reflects more heat back onto the animal than grass does,” he says.

Concrete is the worst.  “It absorbs more heat and holds onto it at night.  If you have areas you can cool off with water (that won’t be mud) or that are rough and can absorb solar heat and not reflect it back, this will help.  If you can cool off concrete it will also stay cool for a certain period of time.  If you have a way of wetting it in a shaded area, it will stay cool,” says Spier.

Make sure cattle are exposed to the night sky if it’s a clear night.  “Get them out from under the shade at night and they will dissipate a lot of body heat to the night sky.  An arid climate gets cooler at night.”  The dry air has low humidity and this enables the animals to lose heat through sweating and evaporation.

“Cattle in Alabama and Mississippi by contrast are subjected to high temperatures and high humidity even at night and it’s hard to cool off.  Humidity is a big factor,” he says.  Heat stress is primarily the result of dehydration; the animal runs out of fluid trying to keep the body cool via sweating, air exchange through the lungs, slinging saliva over the body for evaporation, etc.  But if it’s humid, evaporation doesn’t happen (the air is already full of moisture) and the animal can’t get cool and simply tries to produce more sweat, more saliva, and runs short of body fluid.

“If you are feeding cattle, it’s best to feed them toward the end of the day, so the heat of digestion doesn’t increase their body temperature in mid-day when it’s hottest.  If you can give them more than 50% of their feed toward the end of the day when it’s starting to cool off, the heat of digestion won’t peak until several hours later.  If it’s peaking around midnight they can lose that extra heat more readily than if you fed them a lot in the morning.  This is because the air is cooler,” says Spiers.

“Reduce the amount of fiber in their diet, to minimize heat of digestion.  You can supplement with a little more energy such as fat instead.  Add more minerals, especially salt to the diet, because they are sweating and losing minerals,” he says.

“Watch weather forecasts and temperature-humidity indexes.  The combination of air temperature and humidity is important.  You can look at the index and determine what the combination is--whether it puts you into the alert stage, danger stage or emergency stage.  Even if the temperature is only in the upper 70’s, if you have high humidity (70% or above), you may be in the alert stage, and if the temperature gets up to 80 it’s much worse.  Once you get into the danger or emergency stage, you must do something quickly to save your animals,” he says.

Sprinklers, chilled drinking water and fans are used with dairies, and some feedlots.  Research in Nebraska with feedlot cattle is looking at ways to promote more wind movement to cool the animals, without creating dust.

Convective cooling (movement of air over the animals, taking heat away) works best if there’s a breeze, and air movement between animals.  Most recommendations for avoiding heat stress include minimizing overcrowding, to make sure the animals are not bunched together.

“If there are only a few water troughs and the animals are crowded around them trying to get to the water, they reduce any beneficial effects of a breeze.  Keep animals spaced out as much as possible to allow air movement.  Cut down brush and remove windbreaks around summer pens; you want maximum air movement.  Windbreaks or brush should be removed for at least 150 feet back from the sides of a pen to allow breezes to go through and cool the animals.  They usually need about a 3 to 5 mile per hour wind to effectively cool them, to remove the heat and water they are evaporating,” he says.

Water availability is crucial, but so is water quality.  If water is contaminated by urine and feces—as when cattle have access to a pond—the cattle may not drink as much, and may be at risk for disease.  Some diseases, such as leptospirosis, can be spread by urine.  Coccidiosis, E. coli, salmonella and several other diseases can be spread by feces.
Cattle often wade into water to try to cool themselves.  When groups of cattle mill around in the water they may trample and degrade the banks of the stream or pond—and muddy and contaminate the water.  Cows often wade out as far as they can, to get to cleaner water, but small calves generally drink from the bank or shallow areas—and won’t drink much if the water is dirty.  Research trials have shown that calves drink more water (and have better growth) if it is clean, rather than when they only have access to water that has been muddied and contaminated by the cows.

This problem can be solved by fencing off the stream or pond.  If you limit cattle to a controlled watering area or to a trough where water has been piped from the stream or pond rather than letting them wade into the water source, they benefit from cleaner water and won’t damage the riparian area by trampling the banks.  Rocks can be hauled in to protect the bank at the access area where the cattle enter the water, so it won’t become deep mud.

The most effective way to make sure cattle have clean water and can’t damage or contaminate the pond is to fence it off and pipe water by gravity flow or via pump (or a nose pump) to a water trough or tank.  A float valve can regulate the flow into the tank.  Windmills have often been used for pumping water into a tank, and solar-powered pumps can work in some cases.

A nose pump requires no electricity or any other source of power.  Cattle pump water for themselves.  Jim Anderson (Rimbey, Alberta) created this simple water system in which cattle pump their own water from shallow wells or ponds.  His innovation is a piston pump, like the old-fashioned well in which a person works the handle up and down to lift water.  “We modified this so cattle could use their nose to push a lever.  This operates the piston pump by raising and lowering the piston in the cylinder, the same as a handle used to do.  Like the old-fashioned hand pump, we have a 3-inch cylinder down inside the well.  We capture enough geothermal heat from the ground to keep the water in the well from freezing and it is also cool in summer (ground temperatures are about 50 degrees).”

The waterer is a small basin on the top end of a vertical culvert, with a lever that can be pushed by the cow’s nose.  The culvert has 2 feet sticking above ground level, going down to whatever depth is required to make use of ground water or the bottom of a nearby pond (water from the pond is piped horizontally underground to the bottom of the culvert).   A buried collection tank from a spring would work also.  A regular well can be used, as long as the water level comes up to about 30 feet or less from the surface.

The beauty of this system in summer is that cattle always have fresh, clean water, and the water source is never contaminated.  The fenced-off pond or stream stays cleaner and healthier, with vegetation growing along the banks to keep them stable.

Sometimes the water source is limited, or we may be dealing with a dugout, a bored well, or there is no power source at the site. Solar power is an excellent, efficient tool for pumping water to a tank or other reservoir. Solar pumps allow water to be pumped from almost any depth with very little power. These systems have become the standard replacement for windmills in cattle ranches across the world. With the proper design of the solar PV, pump section, and water storage these systems can meet almost any water demand. Solar pumps can even be used on pipeline systems covering many miles and supplying multiple tanks from one water source or well.