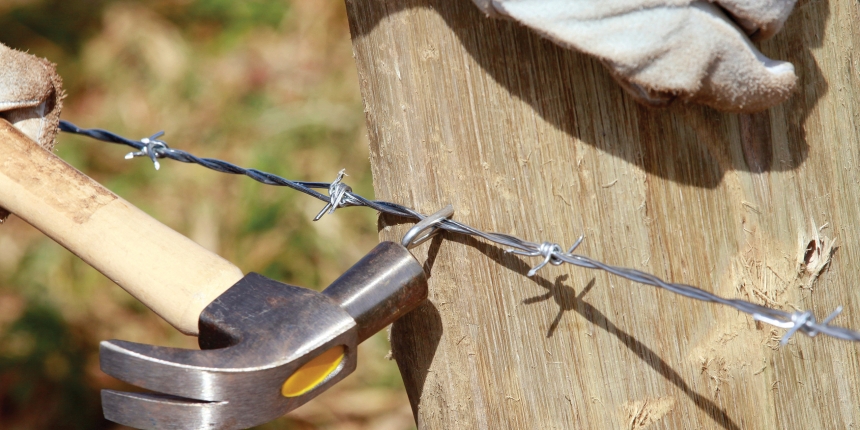 Recently I saw a photo that made me laugh: an old barbed-wire fence with each wire held in place by duct tape wrapped around the wire and the post. I’ve never resorted to duct tape, but I’ve used other innovative and unusual methods to patch a fence when the proper tools or materials were not readily at hand.

On any farm or ranch with livestock, fences are crucial — but they eventually get old and tired or damaged by animals (wildlife or domestic critters) crashing over or through them, or a tree falling on them. Sometimes we come across a bad place in the fence and have to resort to emergency repairs to keep the livestock where they belong.

Our ranch is strung out 5 miles along a creek in the Idaho mountains. When my dad bought the upper ranch (when I was a kid) the fences were in sad shape and one 320-acre-piece of mountain pasture wasn’t fenced at all. My younger brother and I helped build the 3 miles of fence around that half-section. We ran cattle on Bureau of Land Management range for summer pasture and there were also many miles of fences to maintain on those big pastures. Later, my husband and I bought one of the ranches toward the lower end of the creek, along with my dad’s place, and leased the little ranch in between. Altogether we had more than 25 miles of private fence to build and maintain (boundary fences and cross-fences) plus all the range fences.

As a kid growing up, and later (often with a kid or grandkid along with me) I spent countless hours riding to check cattle and this always included checking fences — and doing emergency repairs when needed. If a pasture or range fence was down or damaged, some of our cattle might get into the wrong pasture or the neighbor’s cattle might come into our pasture or range allotment. We always made some kind of temporary repair in case it might be a day or two before the “guys” could get there with a new fencepost or two or whatever else might be required for a major fixing job.

Seeing the photo of the duct tape “fix” reminded me of some of the first repairs I made when I came across staples knocked out by wildlife going through the fence. Sometimes I could find the old staples — out on the ground or in the grass — but if the wildlife hit the fence hard, those staples might have sprung off the wire several feet. There were a few times I didn’t have any staples with me or anything I could use to tie the wires back to the posts. I always had a pocketknife, however, and my horses had nice long tails. I borrowed a few long horse hairs and used those to tie the wires to the posts. Horsehair is strong and durable and some of those fixes were still holding the wires in place several years later. The fence-fixing guys never showed up.

Eventually, I invested in some saddle pouches that I keep tied to the pommel of my saddle (a jacket is always tied on the back). Usually I have a few staples in those saddle pouches and I can almost always find a rock to pound them in. I also have some baling twine in a coat pocket or the saddle pouch. Twine is useful to tie a wire to a post if I run out of staples, but it’s also handy for tying a falling-down post to a nearby tree to hold it up, or to tie and weave some branches together to make a temporary fence if a tree blew down and crashed the fence to the ground.

Using Sticks
Another way to shore up and fortify a fence where the wires have been stretched by wildlife going through (which often happens in brushy areas) is to weave a bunch of long sticks or small branches into the wires to serve as stays. You just alternate which side of the wire the next stick goes on, and if you put in enough sticks, it takes all the slack out of those loose wires. Weaving willows can be a great way to stiffen up and secure a saggy section of fence.

Over the years we’ve extended the life of many fences by putting metal stays between the posts, making it harder for livestock or wildlife to crawl through and stretch the wires. It’s not hard to tie a bundle of stays behind your saddle to take to a far fence in the mountains. One summer my two kids and I spent several days packing stays and putting them into the fences along three sides of our half-section mountain pasture (2.5 miles of fence) to keep out a couple of fence-crawling range cows belonging to a neighbor — cows that thought the grass was greener on our side of the fence.

We recently rebuilt half a mile of old fence along with one of our fields (between the field and the old road that used to go past our ranch right next to the fence). That old fence was probably built about 100 years ago (before our family came to the creek). It had some of the original cedar posts. Back in those days, before the advent of post-treat, people liked to use cedar because the cedar didn’t rot. Those cedar posts were brought to this area on the railroad sometime after 1910. A narrow gauge track was built over the mountains into Salmon, Idaho, that year and the railroad was only functional for a few years, but it was a way to haul in supplies before there were highways and big trucks. We still have some of the old original homestead fence on our upper place — around some hill pasture — that has some of these old cedar posts that are still holding up.

The fence we replaced along our lower field had some ancient net wire along part of it (probably for sheep) and was falling down, but some of it was held up by tall sagebrush (12 to 15 feet tall) that had grown in and alongside the fence. In recent years I’d patched the old falling-down fence in several places by tying it with baling twine to those sagebrush “trees” that were probably more than 100 years old — with bases more than 5 or 6 inches wide. That old fence was still keeping the range cows out and our cows in, but more and more of the old posts were tipping over (from wildlife going over and through) so it was time to rebuild it.

Hammer Roll
Sometimes when a tree crashes over the fence or a herd of elk go through, the wires get stretched or broken. An easy way to splice and re-stretch a broken wire is with a simple carpenter’s hammer. When tightening a sagging wire or splicing a broken wire back together, a fence stretcher is ideal, but you may not have one with you. A simple substitute (and easier to carry while checking or fixing fence on foot or on horseback), is a carpenter’s hammer. A wire can be pulled very tight using the hammer for leverage.

If the wire is broken, you may need to add a short piece of wire to make the splice, to enable you to make loops in the ends of the broken wire and make a “hammer roll” to pull it tight. A piece of smooth wire 1 to 2 feet long will make a splicing job easier.

To start the splice, make a loop in one end of the broken wire and run the short piece of wire through the loop. Place the hammer against the wire and anchor the loose end between the hammer claws. Then roll the wire around the hammer, making as many twists as needed to get the wire very tight.

Once the wire is tight, untwist the hammer, leaving the wire still tight where it bends. Then you can go ahead and twist the remainder of the loose end around the wire, finishing the splice. Using the hammer this way, you can pull the wire much tighter than you can by hand, making the bend in the wire tight enough to hold until you can finish it off by wrapping it around itself.

Author Bio:
Heather Smith Thomas is a cattle rancher, horseman, freelance writer, and book author, ranching with her husband near Salmon, Idaho. She can be reached at hsmiththomas@centurytel.net.