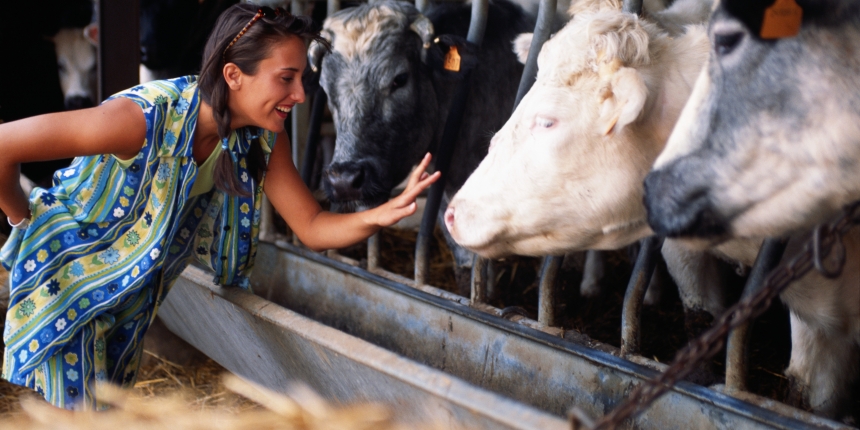 I am surptised by how often I hear about beef producers, especially cow-calf producers, who are reluctant to feed minerals in their TMR mix.The most common concern expressed is "it will promote rust and accelerate wear." In
reality, this need not be the case, and continuing to rely on feeding minerals free-choice at a time when they have been shown  to enhance health  and reproductive performance, such as during early lactation and prior
to breeding, may decrease their cost-effectiveness and cause you to miss out on a significant return on invest­ m ent with both your minerals and your TMR mixer.

min erals is limited, but it has de monstrated that cattle do not consume free-choice minerals in a way th at reliably  meets their nuttition al requirements, especially in relation to optimal animal performance (Table 1). Overall, individual consumption of free-choice min­ erals is highly variable, and generally ranges from animals eating no mineral, to those that consume as much a three times the target amount or requirement. The researchers from  the study, Cockwell et.al. (2000) reported that  only 61-62% of beef cows actually visited the mineral feeder in one of their trials. In Patterson et.al. (2013), the target intake of the free-choice mineral was reported to be 85 g/head/day, which was 36 percent more  than  the level achieved. Finally, free-choice mineral is rarely consumed on a daily basis by the majority of the cattle, and cattle normally achieve their mineral intakes by inf requently consuming large amounts in meals of short duration. Such behavior could conceivably result in poor efficiency  of use and  even short-term toxicity.

BENEFITS OF  FEEDING MINERALS IN  A TMR There is an abundance of published scientific research that demonstrates the value of feeding selected minerals and vitamins at different stages of production, as well as with particular forages or other feed ingredients.These studies generally have one feature in common.
• EACH ANIMAL CONSUMES ITS ALLOCATION:
A common feature of the vast m ajority of mineral research that shows the benefits and  return on investment from feeding mineral products, is that the  mineral supple­
m ents were fed in a way that each animal was offered and

consumed its target amount on a daily basis. In this way, it was assured that each animal received its nuttitional requirement, or individual nutritional allocation. This is what occurs when mineral and vitamin products are fed in the TMR; the opportunity for each a nim al to receive their share of the TMR ration ensures that each animal
receives their  daily allocation of vitamins and minerals in proportion to that intake, thus  preventing both over and under-consumption.
• POTENTIAL FOR DECREASED MINERAL COSTS: Manufacturers of better-quality free-choice minerals add intake enhancers such as protein  ingredients, molasses, and flavors to stimulate intake, as well as intake inhibitors to prevent over-consumption, adding considerable cost
to their products. 'When mineral products are added to a

TMR, these are not required. A considerably less expensive mineral premix can subsequently be used, ideally one that is formulated to closely complem ent the ingredients used
in in one's ration and the needs of the animals. In this way it is often also possible to substantially reduce the amount of expensive phosphate that is added in the mineral when higher levels of grains and certain by-products are fed.
• INCREASE PALATABILITY AND PROMOTE INTAKE: Besides ensuring requirements are met, salt ca n be added to rations to help mask  unpalatable ingredients, or other­ wise increase dry m atter intake. Most commercial dairies and feedlots routinely add the daily salt requirement to the TMR, and some feedlots feed twice the basic require­ ment in order to enhance intake and mask ingredient changes. It appears people are not the only ones that  have a "luxury" desire for salt. High levels of salt can be used to limit intake.

ADDING  MINERALS TO A TMR MIXER
"We have no concerns regarding mixing minerals in our TMR mixers"says Morgan Coffin, Customer Services Manager for Jaylor. But, he goes on to say that it is important that they are mixed approptiately.
With a vertical mixer, minerals should be added last and
disttibuted over as much of the feed in the mixer as possible. This will prevent  them from becoming stuck to a wet spot within the feed or perhaps along the sides of the mixer.
With a twin auger mixer, they should be added between  the two augers, never from the ladder at the front of the mixer. If they are added at the front, it will take a considerably longer mixing time for them to be uniformly  distributed throughout the whole load, compared with initially being split between the two augers. In this way, the minerals, including salt, are rapidly distributed and diluted among

the feed ingredients such that their  concentration is of no concern in regards to rust and premature wear.
Morgan Coffin also says "most of our dairy  and feedlot customers put minerals and salt in their mixes every
day without problems. Besides the dilution effect, the constant use likely keeps them clean and prevents rust." Thus, for best results, it is recommended that the TMR mixer is thoroughly clean ed out and washed, inside and out, at the end of each feeding season, as well as used
to feed minerals to your beef cow-calf herd - Because 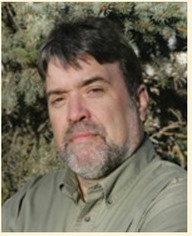 Dr. Alan Vaage  is a Ruminant Nutritionist with  over  30 years of experience in the beef  industry, and currently
provides technical support for Jay/or, in Orton, Ontario. Dr. Vaage can  be contacted by email: nutrition@jaylor.com. 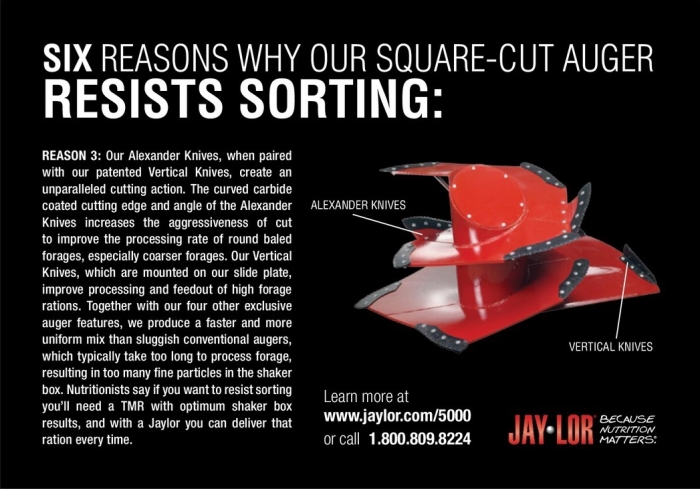 The objective of feeding a total mixed ration (...