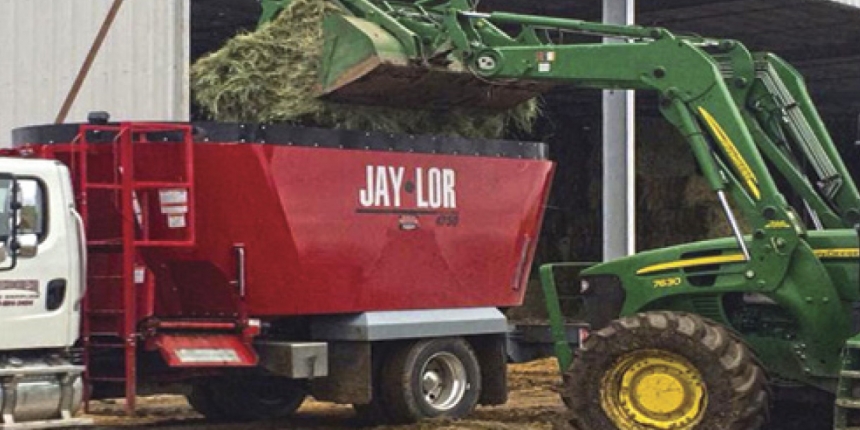 Go to any farm equipment show, or “surf” the internet, and you will see there are a wide range of makes and models of TMR mixer on the market today, which can make selecting the right one for you a bit confusing. In this issue we will look at the origin and key differences between the two main classifications of mixers that are available today, namely, Horizontal and Vertical mixers.

Horizontal TMR mixers are available in two types, auger or reel. Both were initially developed with the intention of mixing preprocessed forages (e.g. haylage and corn silage) with concentrates for the feedlot industry. Adaptations, including the adding of knives to augers, came later to enable limited inclusion of hay and other long forage into a ration, primarily for the dairy industry; feedlots that use horizontal mixers and feed large amounts of baled hay will often pre-grind the hay before putting it in their mixer.
Auger mixers have been made in one, two, three, or four horizontal auger configurations since the 1960s, and largely replaced chain based forage feeders and tumble mixers used before then. Auger mixers have directional flighting that either pushes the feed against itself in the center of the mixer, or in multi-auger machines, towards one end of the mixer, where the feed is passed to another auger moving in the opposite direction, both vertically and horizontally. Mixing occurs when the feed tumbles between the augers.
The forces exerted between the feed and auger flighting creates friction that can cause excessive breakdown of the smaller, more fragile particles in the feed, which can create an effect often referred to as “over-mixing”. This means either the mix is reduced to a undesirable mash consistency that can inhibit dry matter intake, or that small and medium sized particles (usually grain and forage leaves) are excessively

reduced in size, while longer coarse particles remain untouched, so that the ration tends to separate in the mixer, and is easily sorted when fed. Reel mixers appeared on the market in the early 1980s, apparently to deal with some of the mix quality issues experienced with auger mixers, especially where steam flaked grains were being fed. In 2013, they accounted for almost 80% of all horizontal mixers sold in the United States. Reel mixers, as the name suggests, have a reel that extends the length of the mixer, with paddles on the outer edge that can be straight, helical or segmented. These rotate to lift the feed in a circular motion until it tumbles back into the center of the mixer, which is its primary mixing action. While reels can be very effective at vertical mixing, they are limited when it comes to horizontal mixing. For this reason, most reel mixers will have a pair of augers running the length of one side of the mixer that move feed in opposite directions. As the reel turns, a portion of the feed is passed to the augers so that it will move horizontally, thus enabling a degree of horizontal mixing; the lower auger is usually also part of the discharge mechanism. Helical paddles also aid in horizontal flow of ingredients. Nevertheless, due to the inherent limitations and effectiveness of horizontal mixing in reel mixers, it is generally recommended to take care to add ingredients as uniformly as possible along the length of the mixer to ensure a uniform mix. Reel mixers generally work best when used with well processed forages and high concentrate rations such as found in commercial feedlots.

Vertical TMR mixers started to appear on the market in the early 1990s, primarily as a way to process baled forage, especially round bales, and incorporate it into a TMR in one machine. Basically, a vertical mixer consists of one or more, large, vertical, decreasing diameter augers, that are fitted with knives and driven by a planetary gear drive from underneath a tapered drum. A vertical mixer essentially mixes exclusively by gravity; it loads feed onto the auger at the bottom of the drum, elevates it, and then distributes it at the top so that it can mix as it tumbles and flows back to the bottom of the mixer around the auger. Because of the history of the development and application of mixer technology, there is a commonly held opinion that vertical mixers

are not as efficient as horizontal mixers when mixing feedlot rations, or if forage processing is not required. This is not the case today. For example, a Jaylor vertical mixer can be loaded with ingredients for a high-grain grower, or a finishing ration, without the mixer running. Once the last ingredient has been added, the mixer is started, and it will take as little as three minutes for the ration to be completely mixed, and pass a feedbunk mix uniformity test.

In contrast, a horizontal mixer generally needs to be running while it is loaded, with the concentrates and liquids added first so that they have the greatest opportunity to flow and be disbursed in the bottom of the mixer, before the more bulky forages are added and diluted within the concentrates through continued mixing. Thus, total mixing time with horizontal mixers is actually much longer than that required with vertical mixers, though combined time loading and mixing may be comparable. Perhaps this is not surprising, since the same amount of work must be done to achieve the same results.

Vertical mixers have been criticized by some people as requiring more horsepower to operate and being more expensive to purchase than similarly sized horizontal mixers. This does not appear to be the case today, especially with current pricing and when appropriate comparisons are made. For example, power requirements for vertical mixers are a function of auger design and transmission selection, and have come down significantly over the years, and are particularly low for certain brands, such as Jaylor. Furthermore, while operating capacity of horizontal mixers is limited to about 70% of their total capacity, vertical mixers operate optimally at 95 to 100% of total capacity. This, along with their ability to process baled forage and efficiently mix rations of all types, might explain why, despite being last on the market, vertical mixers accounted for over 70% of all new mixers sold in the United States in 2013. Often, one selects a TMR mixer based on tradition, or the proximity of a reputable Dealer and concern for reliable parts and service. These days, the increased return with having the right type of TMR mixer for the job may make it worthwhile to look a little further afield for the best machine to do the job. However, ultimately, any evaluation of a mixer should be done by examining the quality and uniformity of the mix in your feedbunk. This will be the topic of discussion in the next issue of TMR Corner — “Because Nutrition Matters”.