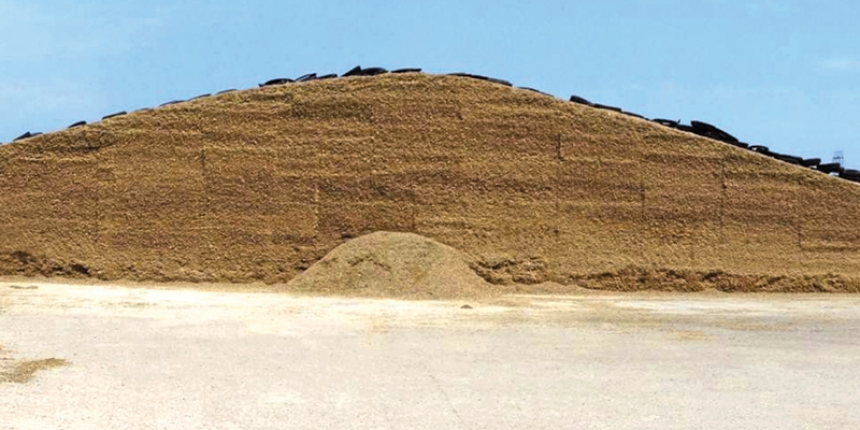 In today’s world, every successful business is concerned about the bottom line, and how to improve it. For most businesses, increasing sales and income is the best option. However, at Grand View Dairy Farm, located in Brillion, Wisconsin, they view the bottom line from several different perspectives. The owners, Bruce and Corey Schmidt have the belief that one of the most overlooked assets on a farm is its inventory. If you make poor quality feed, you’re stuck with it for a year and vice-versa, with good feed, you reap benefits for an entire year.
In 1992, the farm management as well as farm practices of this family-operated dairy changed, from the 2nd generation to 3rd generation. At that time, the farm used silo bags and silos; however, 6 years later with the increase in cattle, additional feed storage was needed. So the concrete pad that was originally used for silo bags was converted into drive-over piles of feed. “We thought there would not be much of a change from the silo bags to drive-over piles. Both systems required our custom operator to chop, apply the inoculant and haul the feed to the feed pad. The only difference we figured was we had to pack the feed with tractors instead of using the bagger, and put a plastic covering on it. Boy were we wrong!” Corey says. As time went on, the Schmidt’s quickly learned many new aspects from quality packing to the importance of removal of feed with a silage facer.
“The plastic feed cover selection took the longest time to figure out,” states Corey. While the feed turned out good for the first year, the Schmidt’s were still not satisfied with the results. In that year, they used one layer of 6 mil covering and tires in rows. The next year, they tried two layers of 5 mil plastic and more tire sidewalls. Year after year, the Schmidt’s tried different brands, multiple layers, and a variety of different mils. Then in 2006, they tried something new, a two-step system with an oxygen-barrier plastic and were really pleased with the results. Corey says, “Our throw-off waste went from little to nearly nothing.” However, still dissatisfied with the 5 mil white covering, as it failed due to minimal UV protection and poor construction quality, they decided to try out a new FeedFresh® product from Raven. FeedFresh® is a unique reinforced oxygen-barrier plastic, unlike other products in the marketplace. Corey recalls, “We had many phone calls with Raven Industries in 2008, before we ordered and ultimately tried their reinforced oxygen-barrier product, price-wise it was similar to what we were already paying for the two-step product. But in the end, we weren’t disappointed.” The Schmidt’s figure they saved half the time installing FeedFresh® versus the two-step system, and ended up with better results. During installation, they didn’t have to worry about the wind lifting the oxygen barrier up, or the oxygen barrier “rolling” up as the top cover was pulled over, or even poking and tearing holes in the barrier as it was pulled across the feed. Another benefit realized, was the ability to choose when to put tires on the pile. The whole process right from the beginning of selecting the seed, fertilizing, harvesting, inoculating, packing, covering, and finally feeding; needs to be looked at carefully. Every step can change the bottom line both positively or negatively. Corey says, “Realistically speaking, today we don’t throw any feed away due to the plastic cover failures. Everyone is going to have some loss due to rodents, but the FeedFresh® product is still one of the best and easiest management tools we have at our disposal. Why wouldn’t you use it, you spend a little more up front, but just think about what you are protecting and saving in the end. Less feed waste is less expenses, and better quality feed is more milk in the tank.” The Schmidt’s hope this article and their personal experience will be helpful for other operations going through this same process, and would like to point out the importance of using the right covering product to increase profits in the end.