Weighing In on Scale System Technologies 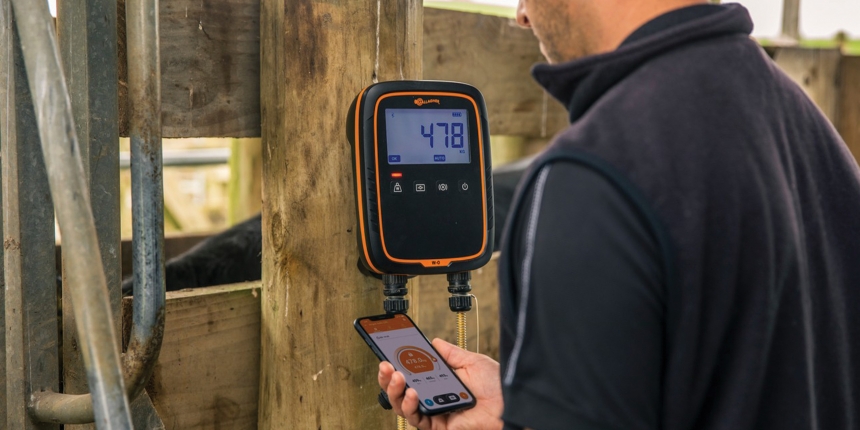 Weighing In on Scale System Technologies.

Technology in all aspects of life has been veered towards ease, efficiency, speed and information at your fingertips, and this is true as it relates to scale systems being used within the dairy and ranching industries.

As Michele Marcoux, territory manager at Gallagher Animal Management, explains, scale systems have advanced to encompass a variety of features. Today’s scale systems are not just for acquiring weights, now a producer can collect all the information they need in seconds.

“All that information is now stored within the reader or scale head for later use,” Marcoux says. “ With the advancement of Bluetooth and Wi-Fi technology, and EID tags, a rancher can capture an individual animal’s identification tag in seconds, which then is linked to its entire history.”

As Marcoux explains, this information can now be shared with animal management software, which means no more dirty or wet sticky notes and calf record books that have to be transcribed at the end of the day.

“The list of traits and life data points a user wants to collect is limitless,” Marcoux says. To add to what the systems can do, technology is being developed to create platforms where data is stored in the cloud via an app or online.

Gallagher offers a line of products that range from a basic scale head that reads weights and can connect to a live app to store VID (Visual ID) tags and weights, to a Bluetooth/WIFI capable scale head that can collect multiple points of data per session, give the user immediate average daily gain and overall rate of gain, allow for sorting, notes and more. All this information is stored in the scale and can easily be transferred to Gallagher’s program, Excel and other animal management software programs.

“We have a line of permanent and portable EID readers, that can also collect data,” Marcoux says. “Our portable HR readers can collect data at the chute or in the field making it easier than ever to have that information at your fingertips.”

Gallagher also recently released wireless load bars, which eliminate the cords at the chute. According to Marcoux, this means less chance of damage. These connect directly to the scale heads via Bluetooth and are battery operated.

According to Andrew Burish, product manager at Rice Lake Weighing Scales, digital livestock scales have been one of the biggest advancements the livestock scale industry has seen.

“While digital scales have been around for many years now, many farmers and ranchers are still utilizing older mechanical style livestock scales,” Burish says. “Digital livestock scales will help speed up the weighing process as they can lock on and capture animal weights in the blink of an eye and also have the ability to print and record weight information and animal data which you typically cannot do with mechanical style scales.”

Rice Lake Weighing offers both mobile and stationary digital livestock scales that can weigh groups of animals or the company features scales designed for weighing just a single animal at a time.

“We also offer a full line of digital weight indicators specifically designed for animal weighing. You can process groups of animals and it will display the average weight per animal for your group, or we have instrumentation designed to track an animals rate of gain which will help determine how healthy the animal is,” Burish says.

And as Jonathan Sabo, vice president of marketing and customer support at Cardinal Scale Manufacturing Company, points out, the advancements in today’s scale systems means that livestock no longer need to come to the scale; scales can now come to them.

In fact, many scale manufacturers offer mobile and portable livestock scales that can be towed or brought out into the field to check weight status periodically, instead of just prior to transport to the sale barn.

“Most of these scales are NTEP legal-for-trade, meaning they have commercially-approved weighing capabilities along with tickets that can be printed for weight records,” Sabo says. “This allows the rancher to complete a commercial transaction directly at their own scale with money changing hands based on the cattle weights. This saves time and money versus transporting their herds offsite to a commercial scale.”

Also, data storage is important, since ranchers and dairy farmers will most likely want to keep digital records of their cattle weights for long-term animal health and growth rate status, so Sabo recommends looking for scales with ports like USB to store transactions that can be pulled off to a PC.

“Power for your scale is always a consideration and many mobile scales will come with an 12V automotive type onboard battery, but newer advancements now include options for solar panel power for your scale, too,” Sabo says.

Cardinal Scale Manufacturing Company specializes in agricultural and animal weighing products, and specifically livestock scales. The company manufactures a wide range of single and group cattle scales in static, mobile, and portable scale types, and most scales come with cattle pens and dual gates and are ready to weigh upon delivery.

As Sabo explains, Cardinal Scale’s popular Weight Wrangler comes in 13-ft-long and 18.5-ft-long sizes in either mobile (with single or tandem axles) or a portable type (that can be lifted and lowered). The Weight Wrangler provides a self-contained NTEP legal-for-trade weighing system that can be used on any firm surface with up to a 5% grade. It comes standard with premium-quality X-lug rubberized flooring for optimal cattle traction and safety that won’t rust out over time. The Harvester LSC series comes with a pre-cast concrete deck with etched diamond pattern in the concrete for hoof-gripping traction. The Harvester uses the same scale deck as a truck scale, so it is built to last through repeated heavy-capacity weighing use year after year.

Considerations to Make
There are several things that producers need to consider when choosing and purchasing a scale system. Marcoux points to loadbar placement, as well as what type and how much data are they looking to collect in each session. And are EID tags being used or will they be incorporated in the future?

“From here we can narrow down the best options for the users,” Marcoux says. For example, if a customer is running cattle in an alleyway, just wants weights, and does not have an EID, we can show them a scale head with minimal features and a lower capacity set of loadbars with a platform. If the user is going to want to capture more data in a chute and wants to utilize EID tags, our larger and heavier capacity load bars with one of our more advances scales and readers are the best option for the customer.”

Sabo suggests thinking about the volumes of cattle that will be weighed. Do you need specific individual weights recorded or are group weights sufficient? If weighing groups of cattle all at one time, select the right size scale platform that is the most efficient for your application.

“Many livestock scales include a mobile weigh center or digital weight indicator that has a USB port for data recordkeeping and also integral printers or printer connectivity for printing tickets,” Sabo says. “Make sure your scale can factor shrink loss. Most weight indicators used with cattle scales will allow you to input the amount of the shrink percent, which it will calculate and display onscreen and print on the accompanying ticket. It’s typical for group cattle scale’s indicators to display current head count, gross weight, and average weight, plus shrink loss. Digital filtering is a must when choosing a cattle scale, since cattle are in constant motion, so select a scale with an indicator that filters the weight signal to produce a stable weight in spite of motion on the scale platform due to animal movement.”

Fred Pulscher, territory manager at Gallagher adds that the producer needs to sit down and look at what he needs and how he wants to grow his herds’ productivity.

“There are so many options out today that a one size fits all system doesn’t really exist,” Pulscher says. “Then start looking at what is coming and see if you want to be progressive in your approach of picking out a reader.”

A common mistake that Randy Bailey, territory manager at Gallagher sees producers make is purchasing scale systems based only on price.

Sabo also sees ranchers choose a cheaper-priced cattle scale and then pay the price for their decision over the lifetime of the scale that negatively impacts them. Make sure your scale manufacturer uses quality steel construction throughout with baked-on epoxy paint that is UV and weather resistant, so that it doesn’t rust out.

Sabo suggests paying very close attention to the flooring, since it is one of the most important factors in choosing a livestock scale, due to cattle sewage and the fact that the scale will most likely be setting out in all kinds of weather.

“Look for livestock scale manufacturers who use a premium-quality X-lug rubberized flooring with seams between planks, so sewage can be washed out easily and won’t collect and rust out the bottom of your scale over time,” Sabo says. “This is a critical consideration. The ability to have your scale serviced, if needed, is another consideration, so choose a manufacturer with a wide service network of available scale service companies representing them.”

Burish also stresses the importance of not waiting until the day before you plan on using the scale to turn it on and check to make sure it’s working properly.

“Often times livestock scales only get used once or twice a year, but when they do get used, it may be the most important day on the farm,” Burish says. “Getting your scale turned on checked out a couple weeks in advance will guarantee things will run smoothly on the day you plan on weighing your cattle. Also, only using your scale just once a year is doing the farmer a disservice.

They should be weighing their animals periodically throughout the year to verify if they are gaining weight at the appropriate rate. If they are not gaining properly, your scale will show you that and you can get that animal the extra attention it deserves.”

Burish suggests that owning your own scale is the best way to maximize your profits when you go to sell your herd as it allows you to weigh animals without transporting them, which is the number one factor that will increase the shrink factor of your sale.

“Shrink is the weight the animal may and will lose at the time of sale that can be adversely affected by transporting them, keeping them off feed, stress, weather, and other factors,” Burish says. “Weighing your animals at your ranch or farm allows you to lower that shrink from 7% or 8% down to only 2% or 3%. When you spread that savings across your herd, you can pay for your scale in just a matter of a couple weighments.”