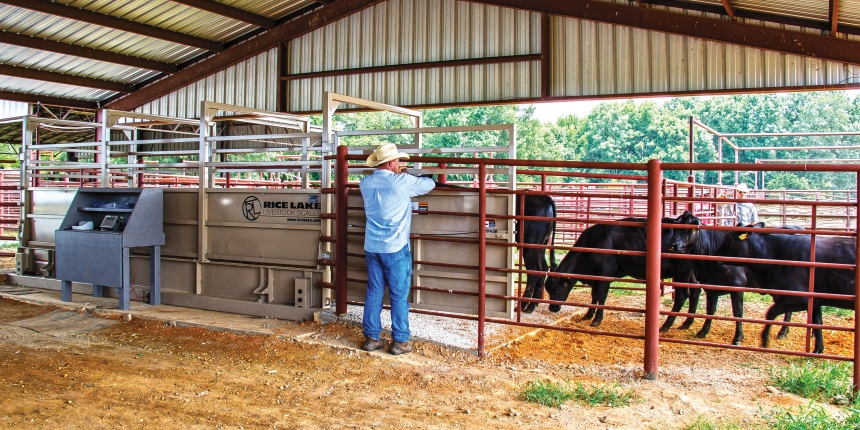 “Nothing else on the farm —whether it’s a livestock handling system, tractor or truck —
will give a producer the same payback and the same value as a Rice Lake livestock scale.”

It takes a special breed to be a farmer. One must withstand the physical rigors of daylong exertion and seemingly endless tasks. Those who take on the challenge provide essential products, from crops to livestock, across the world. While everyone enjoys the fruits of their labor, few realize the effort required along the way. Each hour is an investment with the hope of long-term dividends, and in the cattle-farming industry, no piece of equipment better captures a return on investment than an accurate, durable livestock scale.

David Bryant, owner of Smoky Mountain Cattle Consulting in Cleveland, Tenn., is a livestock industry expert. From an impressive education that includes a graduate degree in animal science to running his fifth-generation family farm, David knows the ins and outs of the business. A native Kansan, he now resides in Tennessee because of the high volume of beef cattle in the area. When most people think of beef cattle, they think Texas, Nebraska and Montana. While these states may boast higher total cattle numbers, the southeastern United States holds bragging rights for most cow-calf operations. Tennessee, Georgia, Alabama, Kentucky and Florida provide an ideal climate and optimal forage environment for beef cattle. The rocky sub-terrain doesn’t lend itself to crop land, making more land available for cattle. The soil may not be ideal for crops, but it is excellent for fescue and bluestem grasses, which provide outstanding cattle nourishment. These elements combine to foster a perfect cattle-raising environment.

Many factors are integral to the success of cattle businesses; however, record high beef prices have increased the significance of every pound of beef, making one factor most important: high sale weights. “At marketing time,” David explains, “many sellers traditionally weighed cattle on trucks, and that is still done today in many areas. Unfortunately, the seller often comes up short in these transactions. The first and most important reason for this is shrink, which is the amount of lost animal fill. Before the cattle are loaded, the buyer and seller agree on a shrink percentage. When the cattle are penned up, waiting for the truck to arrive, they lose quite a bit of weight due to stress. Cattle typically lose one to two percent more than the agreed-upon shrink, depending on how long they have to wait. The farmer is totally dependent on the trucker, and if he is late, the farmer loses significant money in shrink. Two percent of a semi load of cattle is thousands of dollars.”

“The second issue with weighing cattle on the delivery truck is unbillable transportation costs,” David continues. “Before arriving, the driver has to weigh his truck on a truck scale, then burns fuel from that stop to the farm. The cattle are loaded as the truck is idling and burning more fuel. Then, the driver has to return to the truck scale and weigh the full load, but his truck now weighs less than the first weighment. The fuel burned throughout this process is not accounted for, nor is it legal to do so. The weight lost from fuel consumption cuts into the weight of the cattle. It may not be a lot, but it would be a measurable amount of money. If a farmer sells multiple truckloads per year and lives a good distance from the nearest truck scale, it adds up to a significant amount of lost revenue.”

Bringing the scale to the cattle (rather than the cattle to the scale) captures this lost revenue and is designed to save thousands of dollars on shrink because the cattle are weighed on a Legal for Trade scale prior to loading and transport. It also takes logistical variables out of the equation. The seller doesn’t have to wait for the truck to arrive. He and the buyer simply decide on a weighment date and the farmer performs the transaction in a low-stress environment. “It’s exponentially more ideal,” David explains. “The farmer is able to get the cattle up at his leisure, weigh them and print a legal ticket all on his farm. It gives him peace of mind because he isn’t dependent on someone else.”

David has helped dozens of cattle farmers increase their revenue by implementing Rice Lake livestock scales. Years ago, it seemed like only large operations owned a livestock scale, but due to increasing beef prices, a growing number of small operations have also made the investment — and are reaping the rewards.

“Most producers tell me that if they sell four or five loads of cattle per year, the money saved pays for the scale,” David explains. “That equates to 200,000-250,000 pounds of cattle per year. Many small operations produce those numbers and will instantly benefit from a livestock scale. In my opinion, nothing else on the farm — whether it’s a livestock handling system, tractor or truck — will give a producer the same payback and the same value as a Rice Lake livestock scale. You can show your friends a shiny new tractor, but what is the value of its efficiency compared to another tractor? That’s very hard to prove, but it’s very simple to calculate the exact value of what you would have lost in shrink, fuel weight, and your time on a traditional cattle scale. A lot of farmers do not put a value on their time, but it has value. In my experience of traveling and seeing a lot of farms, a lot of people do not account for that.” The time a farmer takes to gather the cattle and wait for a truck is an opportunity cost that could alternatively be used for other revenue-generating tasks.

Monitoring animal weight allows the farmer to gather data, chart growth over time, and make adjustments as needed. Because animals can’t communicate when something is wrong, health issues are often evident with weight abnormalities. “Years ago, the industry’s focus was on the end product,” David explains. “Today, that is shifting to concentrate on the beginning — where the animals are raised and how they are cared for. Investing in the front-end operations increases the quality of the final result. Weight-monitoring is an essential tool in this effort. Farmers who have this data and use it can raise better cattle and increase the value of their operation.”

David Bryant started Smoky Mountain Cattle Consulting as a service to the community and region, providing a much-needed presence of cattle-farming resources and knowledge. His investment in service runs deep. David also serves as a deputy sheriff at the county sheriff’s department. Working in the detective division, specializing in property crimes, David is further utilized for his agriculture industry knowledge. Agriculture thefts aren’t common, but when they do occur, David is on the case. Whether serving as deputy sheriff or cattle consultant, David is on a mission to protect farmers’ investments — retrieving lost property with his investigative acumen and retrieving lost profits with Rice Lake livestock scales.

Gerald and Amy Schmidt are fifth-generation...

Weighing the Benefits of Today’s Scaling...