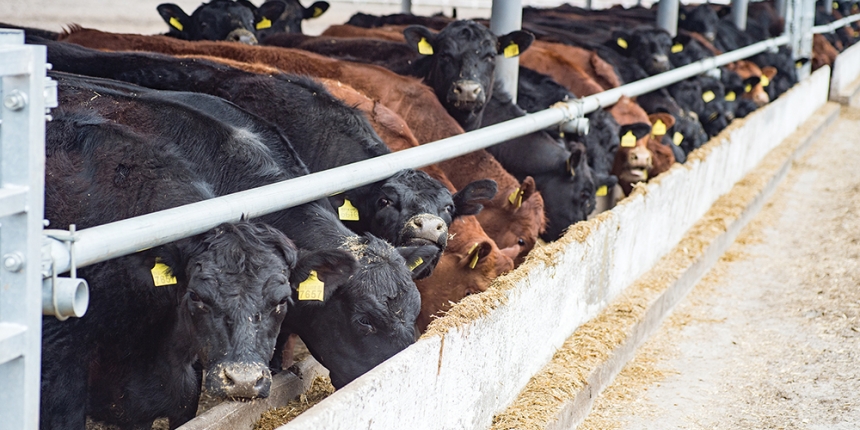 In the article “Nutrient Synchrony: Protein and Energy Working Together,” we discussed how protein and energy act synergistically in the rumen to booster animal performance: Each requires the other for peak function. We also mentioned how winter supplementation often consists of a protein supplement but that protein is not always the limiting nutrient. In this article, we will talk about both protein and energy supplementation and how to know which is the limiting nutrient and when to feed it.

Nutritional Needs for Spring- vs. Fall-Calving Cows
In a spring-calving system in the southern Great Plains, if warm-season forages are managed for grazing through the early part of the dormant season (stockpiling), cow maintenance requirements after weaning can be met going into December. Keep in mind forage type and maturity typically affect forage quality. 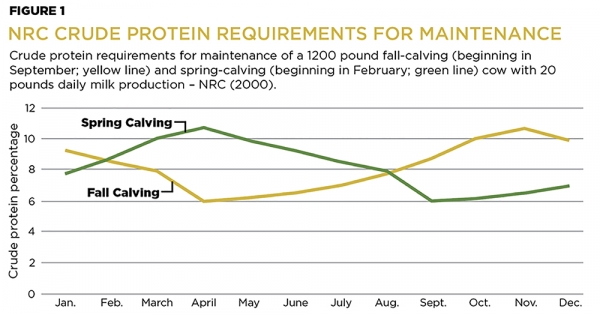 In fall-calving cows, protein and energy requirements for lactation and maintenance are typically not met by warm-season stockpiled forages as they transition into dormancy. At this point, lactating cows will start to lose body condition. It’s not unusual to hear someone talk about how their cows look a little “hard” after coming through winter, even though they fed a supplement. Nine times out of 10, this is because they were protein-forward in supplementation all the way through winter.

Myth: Cows only need protein to maintain condition through the winter.
“Let’s look at nutrient requirements during the fall/winter for both calving systems.

If you’re on a spring-calving schedule with a February to April calving window (Figure 1 and 2, green line), you can expect a cow’s nutrient requirements to be the lowest for both crude protein (CP) and energy (total digestible nutrients, TDN) close to and following weaning around September/October.

If you’re on a fall-calving schedule with a September to November calving window (Figure 1 and 2, yellow line), you can expect a cow’s nutrient requirements to be the highest for both CP and energy during the same time.

Example Scenario
For example, CP and energy requirements of a spring-calving cow close to and following weaning drop to approximately 6% (CP) and 46% (TDN) of total dry matter intake (DMI) around September/October (see Figure 1 and 2). In a fall-calving cow, CP and TDN requirements during the first two months of lactation (September/October) are as high as 10-12% CP and 60-65% TDN of total DMI (Figure 1 and 2). This range in nutrient requirements in a fall-calving cow during lactation is dependent on cow size, cow age, peak lactation potential and DMI.

For a spring-calving system going into the fall, this gives many producers a sense of relief. They met high nutrient requirements during the growing season, were successful in meeting nutrient needs throughout the summer, weaned a healthy calf and now the cows can be self-sufficient until spring again. For a fall-calving system going into the fall, the relief just ended.

Energy (TDN) Drops In Forage When Cow Needs It Most
As fall transitions into winter, the nutrients available in most forages begin to decline, particularly energy. Good quality native pasture will usually hold CP fairly well during the dormant season and can meet much of a dry cow’s CP requirements through fall and maybe early winter. Even well-managed bermudagrass can hold CP levels through December, depending on how wet the winter is.
However, it’s important to remember that the dry cow is also the gestating cow and approximately 67% of fetal weight occurs during the last three months of gestation. This requires a significant amount of nutrients, specifically energy. Not only is the cow requirement now steadily increasing starting around December (again, considering calving season begins in February), but the fetus is starting to impose on rumen capacity as it grows, reducing her dry matter intake.

Therein lies the conundrum: she is eating less but needs more. And while she may be lacking in protein, the initiation of that latter trimester initiates a switch in the limiting nutrient — energy, which is now a priority. 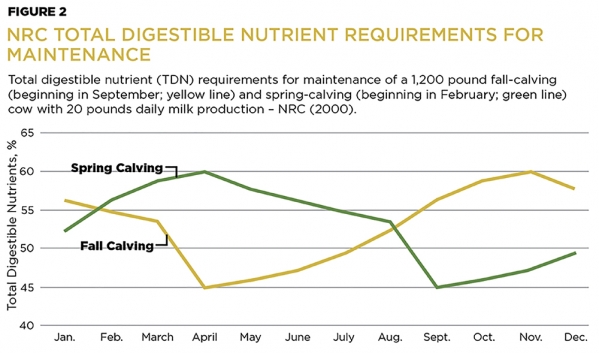 Know Cattle Size and Forage Quality
There is no graph or chart that can be made to point you to the perfect supplement for the winter months. It all relies heavily on two things: cow type (size, age, stage of production and lactation potential) and forage (both quality and availability). It is critical to know the size of your cattle rather than just guessing and to test your forage in order to meet requirements without overspending and underfeeding one nutrient or both.

Which Nutrient Is Needed?
In order to know what nutrient is limiting, you need to have a good understanding of the nutrients that you have available and how much you have available through the winter period. Then based on animal type and stage of production, you can identify which nutrient is limiting and how much. At that point, you can shop for supplements that provide the right nutrients at a reasonable price.
For example: If you are a producer whose property and resources favor feeding range cubes and who is on a spring-calving schedule, it usually is most financially sound to feed a high-protein cube (30-38%) up until December then switch to a less protein-dense cube (20-25%) up until calving. This way you can increase pounds of supplement to meet energy requirements without overfeeding protein and overpowering your feed budget.

If you are feeding a commodity ration, your nutritionist may be more forward with a higher protein base (cottonseed meal or soybean meal) early in the winter and incorporate more energy (corn or corn byproducts) closer to calving.

Most Cows Need Winter Supplement
Most cows in most production systems are going to require some form of supplementation during winter in order to support and promote fetal development, as well as to meet her own maintenance requirements. Every producer benefits from becoming more informed about the nutrients available to cows in the pasture, as well as what the cow requires throughout the year relative to her size, production state and production potential.

Knowing when to invest in protein, or when to invest in energy, to meet cow requirements as they fluctuate is sure to yield a healthier, more productive herd and to increase the effectiveness of dollars invested in the cow herd.